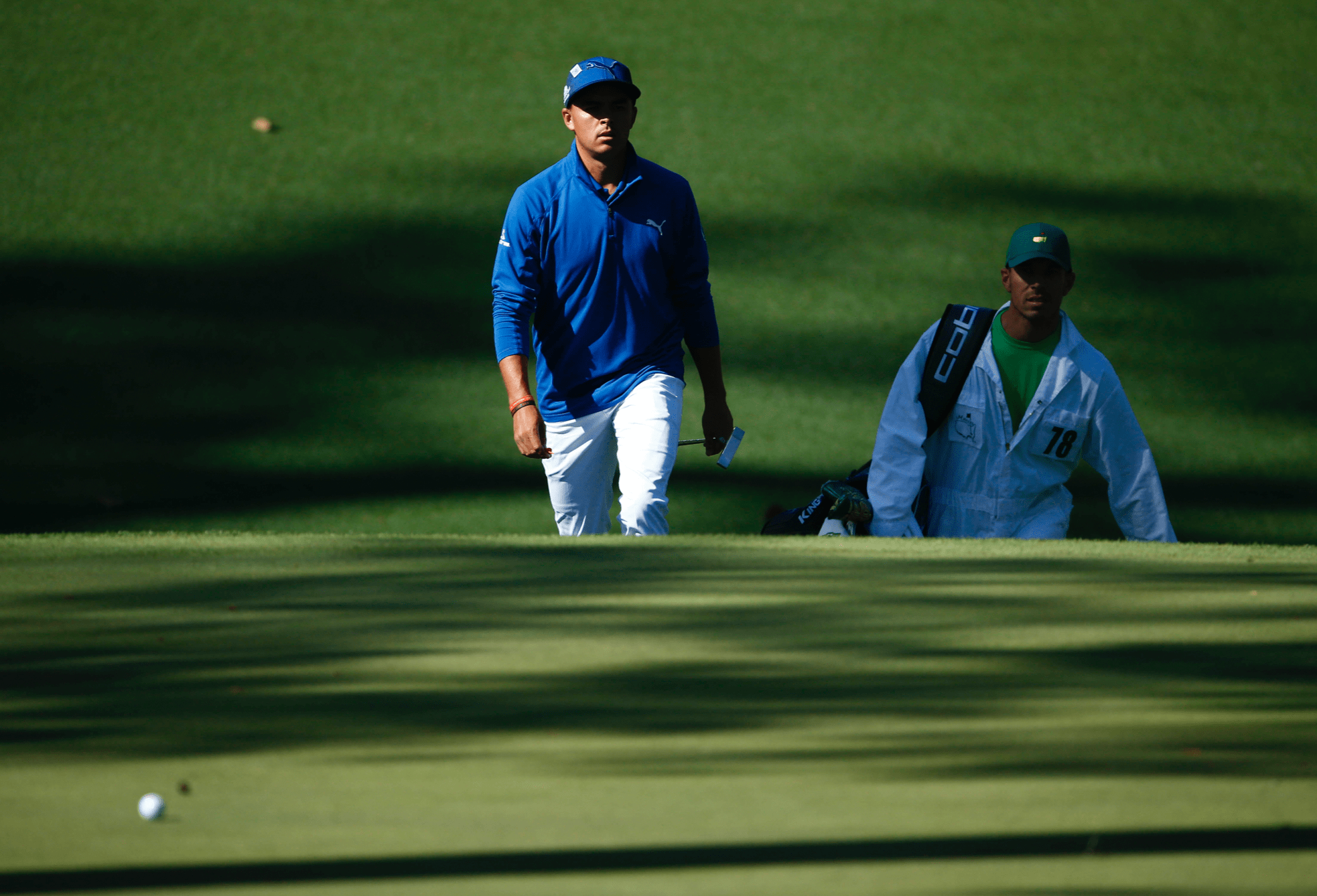 AUGUSTA, Ga. — Rickie Fowler leads the Masters. How good does that sound? Fowler shot the round of the day with a 67 on Friday to tie the tournament lead at 4 under after 36 holes with Charley Hoffman, Thomas Pieters and Sergio Garcia.

Today was Rickie Fowler's 100th career round in the majors. It's the first time he has led or shared the lead after a round. #TheMasters

Fowler needed just 23 putts to put together his 67 on Friday as he used a great bad weather ball flight to slice through monumental winds and chilly temperatures at Augusta National.

Fowler has always been a terrific player in the wind and cold and rain. This is why he excels at Open Championships. The trajectory of his ball is helpful. He has the ability to keep his shots low below the thick stuff at the top of the loblolly pines here in Augusta. With nothing to knock it down, his Titleists can fly to their intended locations. It also helps when you putt your brains out at a major.

“This is number one, no question,” Fowler said of Augusta in terms of where it ranks on courses where he can use his artistry. “With kind of the slopes and backstops and the wind, whether you’re into the wind or off the side, you kind of use it as like a backboard. It’s fun. There’s definitely some fun shots when you’re out here in the wind and there’s some scary shots. But when you pull off those scary ones, it’s rewarding.

“So I wouldn’t say I hit it particularly well today. I just hit it good enough and kept myself in the right positions, and when I was able to, I got an aggressive, made the birdies. This place in the wind, it’s a lot of fun.”

It has been fun for the first two days for Big Rick. He started par-eagle-birdie in Round 2 to get within a handful of the lead before making three more birdies over the final 11 holes to knot things up.

Fowler will play in the penultimate pairing on Saturday with Pieters.

He didn’t seem remotely satisfied after his round, though. I wrote a little bit more here about how this week is a business trip for Fowler, and anything other than a green jacket on Sunday is not an option.

He has evolved as a player to the point that winning a major championship no longer seems like a question of actuality but rather a query of time. It’s when, not if, for Fowler. And when is starting to feel a lot more like “this week” with every passing hole.

Fowler won the Honda Classic back in March and nearly took the Houston Open last week. He is No. 4 on the PGA Tour in play from tee-to-green, and even when he hasn’t striped it this week, he’s been missing in good spots and scrambling like his life depends on it.

“Obviously I’m going to still continue to focus on what I’m trying to do, you know, fairways,” said Fowler. “I saw some of the stats over here, I need to hit some more greens. Luckily the chipping and bunker play has been, you know, saving me, which it’s been doing that through this year. But hit some more greens and give myself some easier two‑putt pars and knocking a couple birdies and make it for a good weekend.”

Fowler is around the field average in greens and fairways hit, but he was No. 1 in the field in putting on Friday. And beyond the empirical evidence, Fowler just has the look and feel of somebody who’s going to win this golf tournament right now.

Does that mean it’s going to happen for sure? Not necessarily. Pieters could shoot 69-68 to clip him, or Rory or Spieth could go 67-66 and win a boat race. But if I’m betting, Fowler is the man coming home. Vegas has made him a 4-1 favorite.

“I love being in that position where you kind of know exactly where you’re at,” he said of closing out with a near-birdie to take the solo lead going into Saturday. “Whether it’s the matches we have early in the week of practice rounds and you have a putt on the last hole to win; you know … it’s like having a ball at the end of the game. I like that position.”

As long as he plays like he’s been playing on Saturday, he’ll have the rock and take the bump late on Sunday with a life-changing day at stake. He’ll stalk the National in orange trousers showing off a compact swing that’s as flat as his hat. Fowler might not win this year’s Masters, but the time has never been better for him to do so.

Winning golf tournaments is all about legitimately being in the mix on Sunday. Fowler has only felt that heat twice in his career (2014 Open, 2014 PGA Championship), but he could (and probably) again this weekend.

So forget what you know about his past or his #brand building. His potential no longer matters, and neither does his what happened in college or on some dumb anonymous survey taken by other players.

What lies ahead is a future that could be changed forever. From the skinny, long-haired kid fresh out of Oklahoma State who took down Rory McIlroy in a playoff at Quail Hollow many moons ago for his first PGA Tour win to the rock star pro who brings his lunch pail every dang day.

The evolution of Rickie Fowler is almost complete.