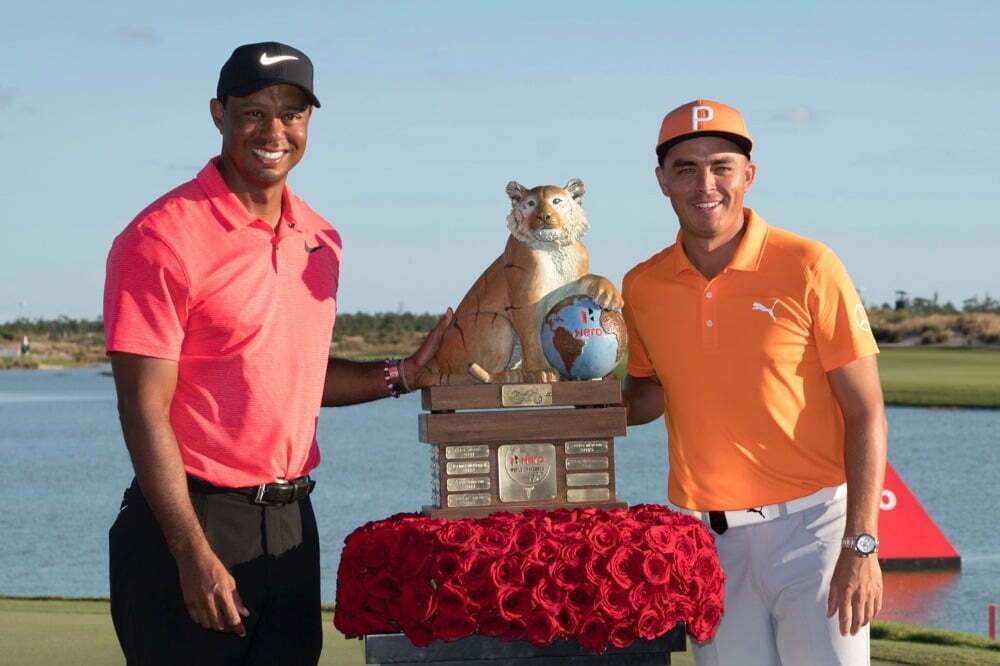 It was Tiger Woods week in the Bahamas at the Hero World Challenge … and Rickie Fowler stole the show. Woods shot an 8-under 280 in his return to professional golf and looked magnificent at times, but Fowler won the tournament by shooting a 61 on Sunday that included a 28 on the front nine and 11 birdies overall.

WARNING: There's 8 of them. pic.twitter.com/aaD6SOhJ9q

WHAT. A. DAY.@RickieFowler beats the world's best to win the Hero World Challenge. pic.twitter.com/iemJ7vIEIc

He beat Charley Hoffman by four after trailing by seven going into the day. The 61 from Fowler was a course and tournament record and the best round he’s ever shot on the PGA Tour. He had six putts in his first seven holes.

Largest 54-hole deficit overcome to win in Hero World Challenge tournament history is 6 strokes by Luke Donald in 2005. @RickieFowler was 7 back to begin today.

The win finishes off a year in which he has now won twice and had 11 top-10 finishes. And it came at an event hosted by newfound pal Tiger, who apparently plays a lot of golf with Rick.

“It’s cool (to win Tiger’s tournament),” Fowler told Golf Channel. “To have the handful of rounds that we got to play together in the last couple months. We had some good times on the golf course. It would have been fun if we had been paired together. I was looking forward to him getting out here.”

The Hero World Challenge is an unofficial event, but that doesn’t mean it was without a big boy field. In addition to Woods, eight of the top 10 players in the world were featured, including Fowler, Jordan Spieth, Dustin Johnson and Hideki Matsuyama. Only Jon Rahm and Rory McIlroy were absent.

"I knew I needed to get off to a quick start today." pic.twitter.com/Oa4dPHCtvA

Fowler will move up to No. 7 in the world with the win and head into 2018 with as much momentum and confidence as he’s ever had. This 2017 year was probably the most consistent of his life even though it only included two victories.

Fowler has figured out how to contend on a weekly basis and has a ridiculous 18 top 10s in the last two PGA Tour seasons (not including 2017-18).

“This time of year … I knew the game was still hanging around where we were for the year,” said Fowler after the win. “To come here after some time off … I knew coming here I was going to have to rely on our year and how we played in Mexico (runner up). It’s nice to see the game hang around and that we can build on some things and make next year a special one.”

One of @RickieFowler's biggest fans interrupts his winner's interview to congratulate him. ? pic.twitter.com/fEXJ7pvvbY