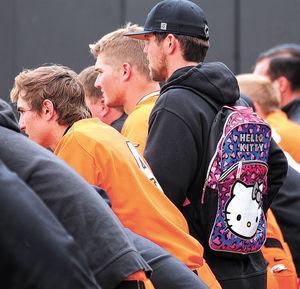 OSU laid the smack down in the most recent edition of Bedlam, but seemed to have little offense in reserves en route to losing a conference series for the first time since the beginning of 2014.

If you hadn’t heard, OU’s latest trip to Stillwater did not go well at all. The Sooners gave up eight runs in the 1st, and the game would only get more out of hand from there. Nine Cowboys scored at least a run, with the last three hitters in the lineup combining for 12.

With the scoreline more indicative of a football game, OU fans might rather reminisce on the latest Bedlam football game, which was at least more competitive. At least you didn’t give up 41 runs.

The momentum continued into Friday, where senior Jon Perrin delivered another quality start to win his third game of the year. He threw six innings, allowing two runs and striking out six. He got no run support until the 7th, when OSU took advantage of two Jayhawk errors to score four runs. Bryan Case added insurance in the 9th with a three-run double as OSU’s win streak moved to five.

Holliday took a chance on Saturday with the hopes of winning an 11th consecutive conference series, but his plan backfired. Michael Freeman started a day earlier this week, and despite not allowing an earned run, he picked up his first loss of the season. He didn’t have his best stuff, but for the first time all season his defense didn’t back him up.

OSU committed an error in each of the first three innings and KU took advantage, with a run in the 2nd and two more in the 3rd. The Cowboys weren’t able to string more than two hits together in any inning, and a two-run rally in the 8th – a Kevin Bradley sac fly followed by a Bryan Case RBI single – fell short.

That set up Sunday’s rubber match, where the Cowboys have normally excelled, having not lost a Sunday game since March 8. Case homered twice in this one, but that would be the only runs OSU could muster. Tyler Nurdin got the start, giving up two runs in 3.1 innings. Seven relievers saw action in this game, but Nurdin would be responsible for the loss, which puts the Cowboys tied atop the Big 12 standings.

Case hit just .267 last week, but of his four hits, he had a double and his third and fourth home run of the season. He drew three walks and scored four times in the Bedlam game, and added another three runs and six RBIs in the Kansas series. That adds up to a .733 slugging percentage and an impressive week for the senior.

Perrin gets the award for a second week in a row after another strong outing, in what amounted to the only win the Cowboys got this weekend. Perrin pitched six innings, allowing two runs on seven hits while striking out six Jayhawks. He kept the team in the game long enough to allow the offense to wake up, which it did in the 7th and again in the 9th to give Perrin his third win of the season. Might have to have a conversation about that Hello Kitty backpack though…

There's a new rule at Oklahoma State: give up a HR & be prepared to wear a Hello Kitty backpack. (via @ocollysports) pic.twitter.com/ujy7S6zQZh

He’s ready for his big opportunity.

I hope it was orange slices and juice boxes.

Hey @OSUDiamondDolls thanks for hooking it up with the snacks for the road trip!

Both were teammates at Bishop Kelley.

Good week for the senior catcher.

Case's 2-HR game is first of his #okstate career and second 2-HR game by a Cowboy this season. Green had 2 vs. Washington