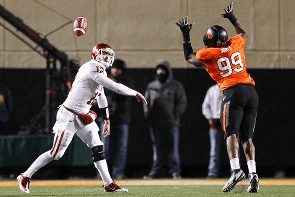 Our last one of the football season (probably). Hope you guys have enjoyed reading these as much as we’ve enjoyed putting them together.

Porter: At some point Tyreek just wins a game single-handedly with a couple kick returns and a wheel route that impregnates the entire first row on the north side of Gaylord Memorial.

Dave: History tells us that teams favored by 20 win approximately 93 percent of the time, so we’d have to play it 14 times to get a win. Let’s be optimistic and say 10.

Carson: I’ll use Dave’s math and double it because…it’s OSU in Bedlam. 28.

Boone: one out of five.

Amilian: Rudolph starts to get comfortable after a few games and eventually pulls it off in Game 7.

Nolo: I’m going with 15 assuming no more of our QBs get injured.

2. If Gundy doesn’t start Rudolph what will your reaction be?

Porter: 2004 was as much fun as I’ve ever had at an Oklahoma State football game. I know we lost but it was the apex of my fandom as a college student. I don’t know that I’ve ever cared more about a game before.

Dave: Watching the 2001 game with my dad and my friends at my college apartment. My friends were celebrating after the Woods catch and my dad was pacing around preaching them about how “this isn’t over, guys”.

Shepherd: The 38-28 game in ‘02. Watched in Norman with my Crimson-clad side of the family…one of the best days of my life.

Carson: Sports are never as cool as when you’re a little kid. In 1997 OSU won Bedlam 30-7, R.W. McQuarters was a superhero and OSU had a number by its name (No. 25, unprecedented). My mind was blown.

Southwell: 2001: My dad and I were heading to Stillwater to watch the basketball team play North Texas (well the 2001/2014 comparison is starting to look eerie).

That whole night was great.

Amilian: I wish I had more options to choose from, but I’m going with 2001. That “Who Let the Sooners Out’ trash song was still playing around Oklahoma and it was nice to put an end to it.

Nolo: I never watched a Bedlam football game until my freshman year at OSU which was the 2005 season. 2011 is literally the only positive Bedlam memory I have.

5. Who is your favorite OU football player ever?

Porter: AD — he was a joy to watch even though he lit Stillwater on fire.

Boone: Probably Adrian Peterson. Incredibly fun to watch (except against us).

Southwell: Ryan Broyles…the other 85. But seriously, that guy is awesome.

Amilian: We couldn’t have gone with least favorite? (Would have been Nic Harris – Thanks for this Tebow).

Nolo: Sammy B. He was fun to watch in college and I heard nothing but good things about him off the field and in the classroom.

6. What are you rooting for to happen in the Playoff this weekend?

Porter: I want the top six to lose just to see what the committee does. Arizona would be the only semi-lock. I think it would end up being Bama, Arizona, Kansas State (!), and…Oregon.

Carson: The SEC somehow getting left out would be hilarious.

Boone: Something crazy. Either A.) Alabama loss. B.) FSU loss or C.) Both

Southwell: Madness. I want to see Oregon vs. Baylor (uniforms!) and TCU vs. FSU. Two Big 12 teams and no SEC teams, with the opportunity to see the Big 12 Championship game as the National Championship game.

How fast would they amend the system to incorporate 8 teams?

Amilian: Undecided here. I love the idea of no SEC teams making the Playoff but on the other hand, I want to see them play a game or two against Oregon/TCU/Florida State. We’ll see how good they are. And if they win both games, they’re the best team in the country.

Nolo: I want to see Holgerson make a “We beat Baylor head-to-head and therefore deserve to be in the playoff” argument on College Gameday.

7. Everybody is talking up this basketball team (including me) — what is its fatal flaw (besides Ford coaching on the road in a Big 12 game)?

Porter: Inside scoring. I just don’t see how we’re going to get points on the interior if Nash gets in foul/grade trouble.

Shepherd: If it’s true Le’Bryan sat out Wednesday night because of grades….I’ll go with that. Can’t lose him for any amount of time.

Dave: Who do we go to when we *really* need a basket? I am buying into the great-senior-year-story for Nash, but I don’t know if he is that guy or even wants to be.

Carson: It’s not so much their flaw as their situation: Ridiculously stacked league with ridiculously good coaches. No gimme road wins.

Boone: How we handle situations late in tight games in conference play.

Southwell: I haven’t been able to watch them yet (yikes). Maybe the depth or the live-and-die by the three business.

Amilian: Ford coaching at home in a Big 12 game. I’ve only watched a couple games and don’t feel like I know enough to pick a fatal flaw.

Nolo: I’ll agree with Carson. The coaching and talent depth in the Big 12 is just brutal. Road wins will be tough to come by, even in Ft. Worth.

8. Rutherford, Adkins, JamesOn, Forte, Peterson, James, and Keiton (all in their primes) have a shooting contest from the Eddie Sutton logo in GIA.

Porter: Adkins is the biggest wild card for me. He could literally make 55 in a row or not make a single one. I’m not picking him though because I like my legs. I’ll go with Rutherford. I trust his consistency more than anybody else from that range.

Dave: I pick Forte and I don’t look back. This isn’t just recency bias. The guy would win the contest, I have no doubt. Now, if I have one guy to take the shot late in a high-pressure game, I think about it and probably take Rutherford.

Shepherd: I’m honestly less worried about the money than I am keeping my legs. Give me the “Pawnee Pistol” Keiton Page and only because I’ve got a gut feeling.

Carson: Rutherford. He’s the best shooter to step foot in GIA and would intimidate everyone but Adkins. Those are your finalists.

Boone: My money’s on Forte. Only because this:

Southwell: Forte. I’m hesitant, though, because of my record picking college football games this year. I can’t afford to be much shorter, so Forte for the Pickens’ Pocket Change.

Amilian: Comes down to Rutherford and Forte for me. Since I’m pro 90s OSU basketball, I’ll roll with Randy.

Nolo: Easy. Forte. The 3-pointer has become much more a part of the game as it was in the 90’s, and the 3 point line has moved back since everyone else on this list but Keiton played which means they are the only two accustomed to shooting from further away, and they have a lot more practice with it.