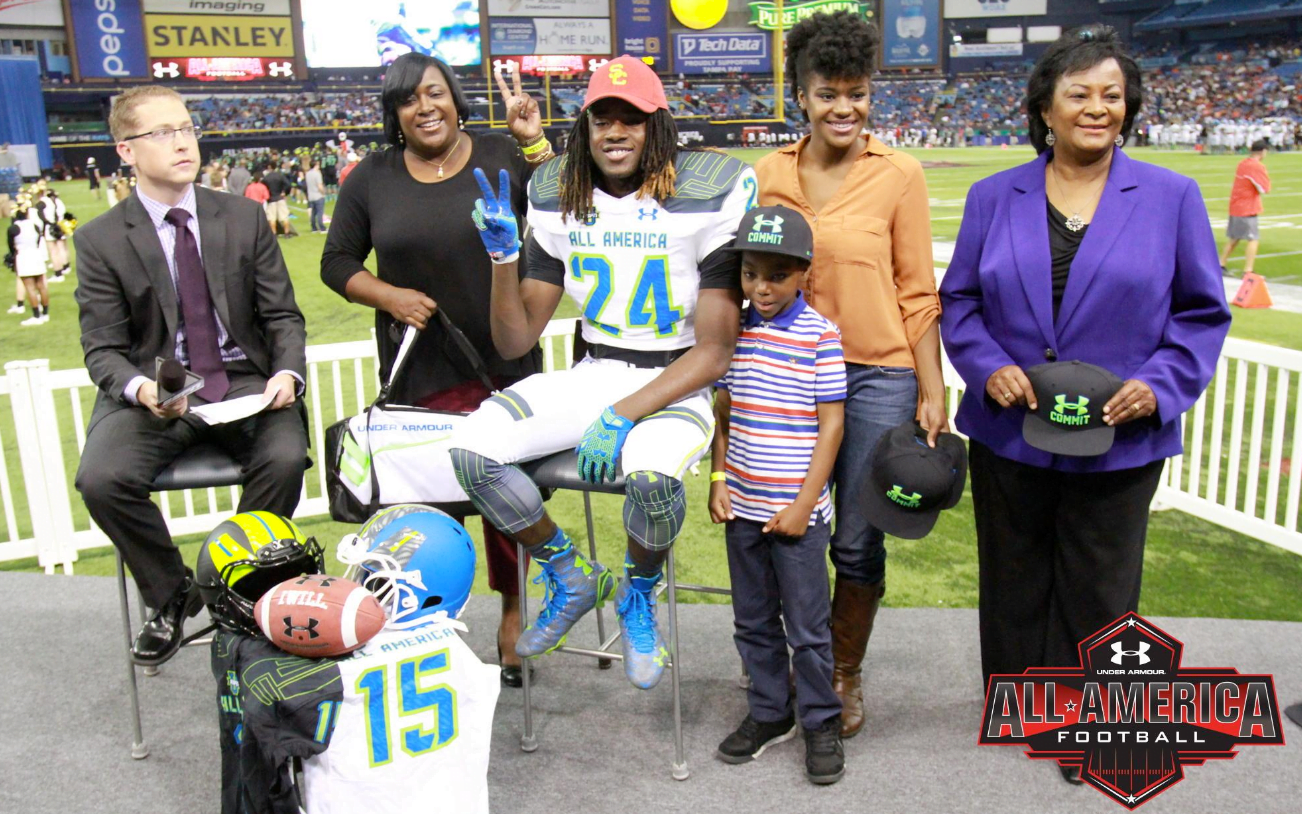 There are sliding doors moments in life that pass us by every day. But in recruiting those sliding doors moments are amplified ten-times over, with one recruit’s decision affecting another in a tangible way, and another recruit’s decision affecting another in a different way, and so on. Opportunities come and go. Offers are committable then they are not. The moving pieces in recruiting are like an unsolvable puzzle that miraculously come together by signing day.

I can’t lie though: I fixate on the sliding doors moments — and sometimes more so than the actual moments. The what-ifs in recruiting are in part why I became so fixated on OSU recruiting years ago. (Austin Grandstaff committing to OSU then flipping to Ohio State will forever puzzle me.)

So what really gets my gears grinding in the what-if world of recruiting? Here are seven  that I think about — a lot (way too much!) — that could have shifted the OSU landscape for the better (or worse) in the Mike Gundy era. (Not ranked in any specific order.)

I’m putting this one at the top of my list because when I think of recruiting what-ifs and OSU, RoJo darts into my head faster than his 40 times. He committed to OSU in April, 2014, and was just a few months from signing before he decommitted from OSU in December that year. Then on January 2, 2015, he made his flip to USC official.

In the aftermath of that decision, OSU had a mad scramble and eventually landed some junior college prospect named Chris Carson — thanks to Mike Gundy’s gamble that Barry’s Heisman would win him over. (It did.) The other running back in the class wasn’t quite a hit: Jeff Carr was a late addition that OSU added after Gundy’s son helped him pull up tape of him on the computer. He played in 19 total games before leaving the program.

“I was at home and got a call the day before signing day,” Gundy said five years ago of discovering Carr. “So I went in on the computer and had my son pull it up because I don’t know how to pull things up on the computer. So he pulled him up and clicked him on and he and I watched him and we definitely agreed that he’s good enough to play at this level.”

The positive of RoJo bailing is that, a class later, OSU got underrated Tulsa running back Justice Hill to commit just after signing day — and Hill held true to his pledge for a year, eventually going on to become Justice Friggin’ Hill. If RoJo does come, perhaps Justice looks elsewhere.

2. Ryan Broyles goes from orange and black to crimson and cream

Ask anyone old enough to remember this one, and it still stings. Ryan Broyles was an in-state gem who committed to Oklahoma State early, then Cale Gundy called and pried him from the grip of Mike Gundy and his staff.

“As an 18-year-old kid talking to Oklahoma State, they offer you and you’re all excited,” Broyles once told the Norman Transcript, “and then Oklahoma offers you and you’re even more excited.”

“I feel like I’m a loyal person,” Broyles added. “[Oklahoma State] spent a lot of time recruiting me, I gave them my word and I started feeling guilty.

“It’s just one of those deals, you’ve got a lot of emotions. Kids dream of having scholarships and playing at big-time schools and then you just don’t think about the pressures of making a full commitment and going through with that.”

“I actually called [Brewer] that morning right after I signed because I didn’t want any more pressure,” Broyles said.

“… He gave me a couple cuss words here and there. He wasn’t too happy. But I’ll tell you this, as of today, my mother still talks to him, I still talk to him. I follow what he’s doing. And there’s no hard feelings.” [Norman Transcript]

Fortunately for OSU, losing Broyles didn’t wind up being consequential.

Oh wait a sec, did you say Ryan Broyles?

googles Ryan and not Bryan

Oh mama that one hurt.

Sensing a trend, no? First Broyles, then Okoronkwo, next … our pets heads are falling off!

Okoronkwo was a more recent Bedlam stinger, but a stinger it was. He committed to OSU in June of 2012 then flipped to OU just a few weeks after OSU lost to OU in Bedlam the same year. Just a brutal turn of events. He went on to become the Big 12 co-defensive player of the year in 2017 and earned All-American honors.

4. What if Ole Miss doesn’t drop the bag?

Remember Laquon Treadwell, circa 2013? He was a five-star recruit in the 2013 class who visited OSU on numerous occasions, was personally recruited in part by Mike Gundy, and eventually landed on a final three of OU, OSU and Ole Miss.

Then, these four developments took place. 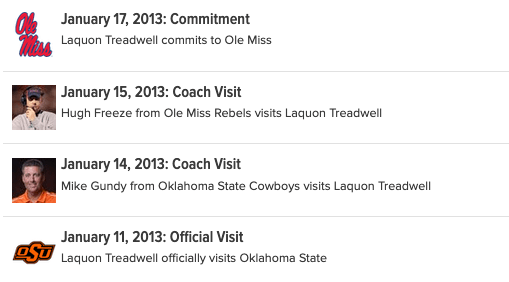 Of note: this development took place during his Ole Miss visit. 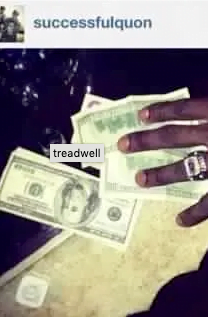 Freeze was eventually fired (technically he “resigned”) after a “pattern of personal misconduct.” Ole Miss was eventually hit hard with sanctions by the NCAA. Somewhere Mike Gundy is cackling (probably).

5. What if Devon Thomas sticks with OU?

In the 2014 recruiting class, Broken Arrow running back Devon Thomas committed to OU in November of 2012 before decommitting a month later. Days after that, he committed to Oklahoma State. Now, the rumor is that OU pulled his scholarship and OSU provided a soft landing spot. But in any case, what happens if Devon Thomas does in fact sign with OU?

It may have been a double whammy for OU. Thomas was dismissed from the OSU program before ever playing a snap, so it was essentially a lost scholarship. But here’s the real kicker: OU went on to sign Joe Mixon in the 2014 recruiting class instead. Mixon during his time at OU was a superstar, transcendent talent (on the field), and a Bedlam killer, too. If Thomas goes to OU perhaps we’re talking about UCLA alum Joe Mixon and not OU alum Joe Mixon.

I could write a book about the entire 2016 class (Tramonda Moore! Tyler Brown! Nick Starkel! Nyc Burns!). But instead I’ll settle for the most interesting aspect of the class: the quarterbacks.

Nick Starkel committed to OSU in April 2015 then decommitted in December that year — right around the same time preferred walk-on quarterback Nyc Burns committed to the program. In talking with folks about it, Starkel was intimidated by Burns and his senior rise of meteoric fashion — and wasn’t happy about it.

Either way, Keondre Wudtee eventually signed with OSU over TCU on signing day, and never really panned out.

7. What if Tyron Johnson commits the first time?

This has a happy ending, so why not end here?

Before Tyron Johnson torched secondaries in Stillwater from 2017 to 2018, he was at LSU. That’s because in 2015, as a five-star receiver from Louisiana, he committed to the in-state LSU Tigers over Oklahoma State and Texas Tech. He lasted just one season (four games) before going through camp the following year and transferring out.

I think most OSU faithful remember Tyron fondly now — the dude was different — but it would have been pretty incredible to watch Tyron and James Washington both lighting it up with the likes of Chris Lacy, Marcell Ateman, Jhajuan Seales and David Glidden in the mix. Whooo.