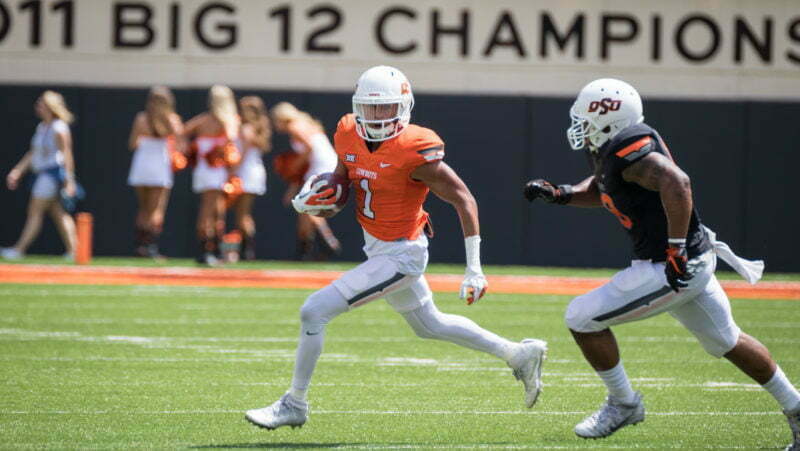 Oklahoma State’s 2017 receiving corps may be the best in the nation. Its equal parts explosiveness and depth were just too much for Mason Rudolph to pass up. He’s back, and the hype in Cowboy country is palpable.

James Washington, already a record-setter, has a chance to chase down Rashaun Woods as OSU’s all-time receiver. At worst, he’s set up nicely to finish No. 2. Marcell Ateman has been itching to continue his dominance from 2015 after sitting out what would have been his senior season a year ago. And then there’s Tyron Johnson who many are already crowning the next great pass catcher in orange. We haven’t even mentioned Dillon Stoner, Tyrell Alexander and blue-chip signee Tylan Wallace and his fellow freshmen LC Greenwood and Braydon Johnson.

Am I missing anyone? Perhaps we all are.

It would seem that hype is measured in inches because it was the shortest receiver on the roster that was the most effective for Oklahoma State’s offense in 2016 — and maybe the most overlooked. Not only did Jalen McCleskey lead all Cowboys with 73 catches last year — which also leads all returning Big 12 receivers — he was by far Mason Rudolph’s most reliable target. And he’s one of the fastest, most dynamic athletes on the roster.

At 5-foot-10 and 156 pounds, McCleskey was far from an imposing figure. As the son of former NFL defensive back and Louisiana football training guru, J.J. McCleskey, he’s got the pedigree. But his size deterred interest from major schools. Even after back-to-back all-district years at St. Paul’s High School (Covington, Louisiana) and a highlight reel full of big-time catches, the recruit who boasted a 4.40 second 40-yard dash only received one Power 5 offer.

But Mike Gundy did see something in the slight recruit — and it reminded him of another game-changing slot receiver he had coached. During his 2015 Signing Day press conference, Gundy explained why they chose McCleskey as the only wide receiver for the signing class.

“He has great speed, like (Josh) Stewart in his ability to move and make guys miss, but faster straightaway,” Gundy said. “He can really roll. He’s a guy that can take the top off a defense.”

As a true freshman in 2015, McCleskey didn’t disappoint. Playing behind super slot man David Glidden, McCleskey made 29 catches on just 32 targets. Let me repeat that. A true freshman who missed just three passes thrown his way. That’s a ridiculous 91 percent catch rate. For reference, the dependable senior, David Glidden, was at 66 percent and a sophomore James Washington was at 52 percent that same year.

McCleskey’s per-catch yardage doesn’t jump off the page. From the slot position, he is up for much more short and intermediate throws from Rudolph, but don’t think of him as just a safety blanket. He had catches of 28, 36, 39, 47 and 52 yards last season to go along with seven touchdowns.

Washington may be the undoubted No. 1 option and OSU’s deep-ball threat, but McCleskey has the best catch rate of any featured receiver Mason Rudolph has ever thrown to during his career. In fact, McCleskey was the seventh-best possession receiver in college football last year according to Football Study Hall, ranking in the 94th percentile.

So tune in as Washington chases history. Get excited for Ateman as he retakes his place on the outside. Please, buy in to all the Tyron hype. But overlook Jalen McCleskey at your own risk.