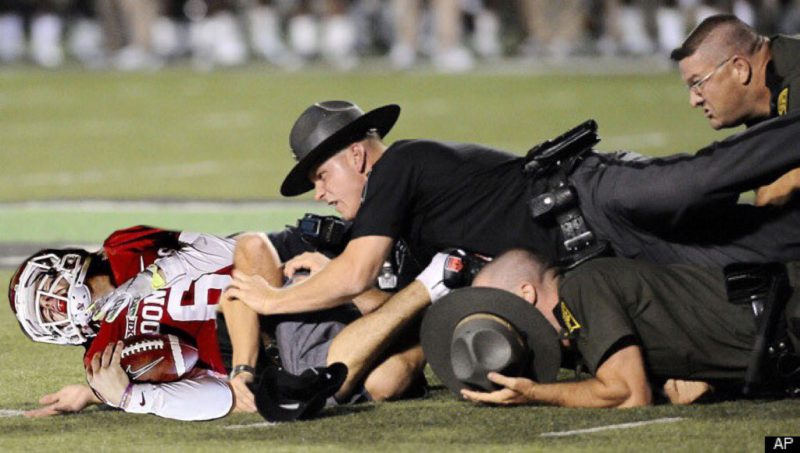 An OU football player was arrested on Friday. No that’s not a joke. It’s happened again.

Baker Mayfield drank too much and got tackled by an Arkansas cop. Thankfully it doesn’t seem like anyone was put in danger because of Mayfield’s actions.

Twinter lit up with commentary of course, though, and this isn’t the best of what we saw.

To be real. Nobody in SEC country has caught him until now. Fayetteville PD jumps into top 25 now.

Well, you may be on to something here…

Yurcich- "Gundy, I know how we can win bedlam!"
Gundy- "How?"
Yurcich- "Hire 11 cops to play defense." pic.twitter.com/vcLmv0USCC

Eh, it was worth a shot. #Sources

Sources confirm: Mike Gundy is not recruiting the police officer who tackled Mayfield.

Maybe, that officer still has a chance.

At least he (hopefully) had a good time earlier in the evening.

I can confirm that Dickson Street > Campus Corner https://t.co/V4KwEH29QI

Clay Travis from the top rope.

Positive for Oklahoma fans is at least Baker Mayfield wasn’t charged with punching any women. Might have cost him a half against UTEP.

Always best to look at the bright side.

Underrated part about the Baker Mayfield arrest is the booking time. 8:21 AM. First guy in the jail. NFL scouts love that work ethic. pic.twitter.com/i6PV2S5vJi

Breaking: Bob Stoops announces that Baker Mayfield will be suspended for second half of OU spring game

When you chug your whole Sex On The Beach and finish it off with a Gatorade shot!!! #Rage #Unable #BdaketfrMaygiueld pic.twitter.com/XxLwl9uleU

In all seriousness, I agree with this.