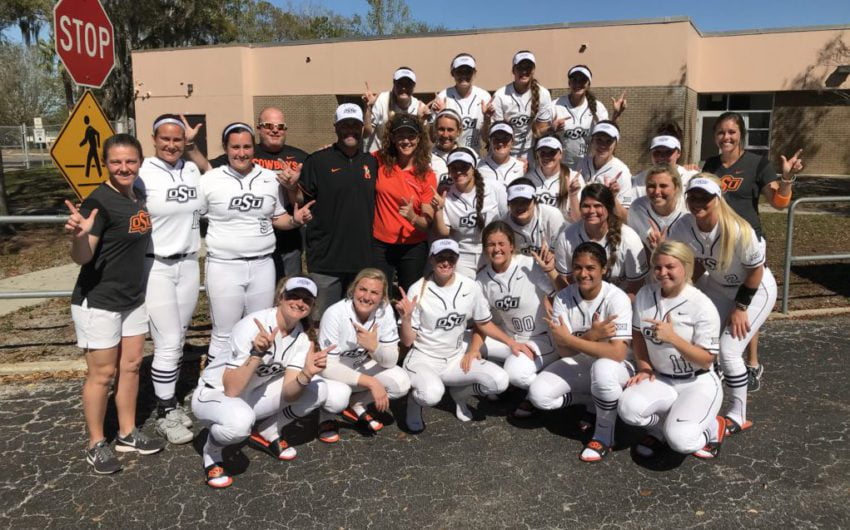 Let’s get caught up on the goings on around Oklahoma State from last week. Baseball and softball are now underway, tennis is rolling and the wrestling team finished the regular season strong.

The Cowboys took their opening series this past week against the Texas State Bobcats with a 6-5 victory in the final game on Sunday. Colin Simpson played a key role in the series victory, hitting two home runs and driving in three runs in the rubber game to help seal the win. Here’s a brief interview with OSU’s head coach Josh Holliday:

The Cowboys will have their home opener on Tuesday against Oral Roberts at 4 p.m. at Allie P. Reynolds Stadium.

The Cowgirls fell to No. 6 Texas, 77-62, this past weekend to fall to 18-8 on the season and 9-6 in conference play. Loryn Goodwin and Kaylee Jensen both scored in double-digits, recording 21 and 19 points, respectively.

Final from GIA. #okstate falls to a top-10 opponent for the second game in a row. pic.twitter.com/Jcie1SQiHn

The Cowgirls will try and bounce back on Wednesday against Kansas in Lawrence at 7 p.m.

Freshman Austin Eckroat finished tied for first place on Sunday at the Wyoming Desert Intercollegiate at Classic Club in Palm Desert, California. Three other Cowboys competed in the event. Junior Nick Heinen finished at 8-under 208 to tie for seventh place and seniors Sam Stevens and Stratton Nolen also competed in the event.

The Cowgirls defeated Oakland, 7-2, on Sunday to go to 4-1 at the Michele Smith Invitational and 8-2 on the season. Junior infielder Madi Sue Montgomery had one run and three RBIs in the Cowgirls’ victory over the Bears.

OSU split the first day of competition with a win over Florida Atlantic and a loss to Tennessee, but defeated Missouri and Southern Florida on Saturday before taking on Oakland on the final day.

That 8-2 feeling ? Best start for #OKState since posting the same mark to open the 2011 season! ? pic.twitter.com/7XarO1vZTB

The Cowgirls’ next action is in Palm Springs, California, for the Mary Nutter Collegiate Classic. OSU will play Wisconsin, Oregon State and No. 3 Oregon, among others.

The 12th-ranked Cowgirls defeated Pacific, 4-0, to move to 8-1 on the season. OSU took the doubles point and first sets on every singles court and then recorded straight-set wins from Megan McCray, Katie Stresnakova and Sofia Blanco to finish the contest in less than two hours.

#OKState picks up a 4-0 sweep over Pacific Sunday for its fourth-straight win.

The Cowgirls now prepare for the Orlando $25,000 ITF event from March 4-10 in Lake Nona, Florida, before heading to California to take on No. 10 UCLA on March 14.

The fifth-ranked Cowboys bombarded Big 12 opponent Fresno State, 41-0, to finish with a 13-2 record and and 8-0 in conference play. The Cowboys had three falls from Kaid Brock, Dean Heil and Chandler Rogers, and a tech fall from Nick Piccininni and three major decisions. Read Seth Duckworth’s Five Thoughts on the Cowboys’ dominating performance here.

#OKState wrapped up its dual season Sunday with its most lopsided win since 2016.

The Cowboys now set their sights to the Big 12 Championships from March 3-4 at the BOK Center in Tulsa.