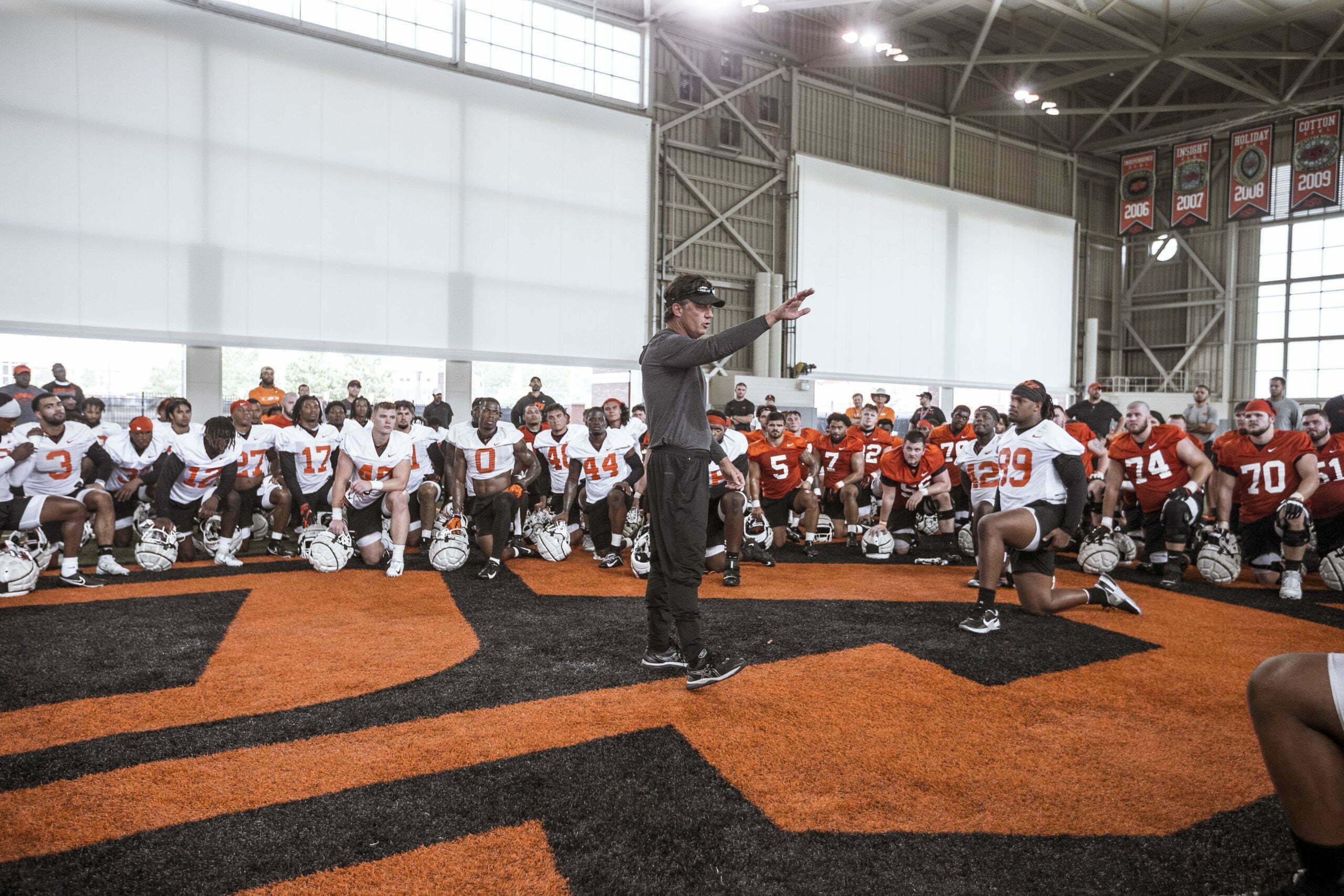 Spring training camp for Oklahoma State football gets underway on Tuesday in Stillwater, the first official step for many new arrivals and old hats in preparation for the 2022 season. Storylines abound as the Cowboys convene for the spring, from how OSU replaces production at running back, to development of young receivers to the imminent shuffling of the offensive line and so, so much more.

I’ve called in the big guy himself to help me break down what to watch. Marshall and I have each listed our own top storylines — ranked — below, with some thoughts on pre-camp expectations. Marshall will be covering the action as it unfolds the next month so be sure to give him a follow on the Twitter machine.

1. QB2: There isn’t a quarterback battle to break down at the top of OSU’s depth chart this offseason, but there is some uncertainty surrounding Spencer Sanders’ backup. Sanders plays a high-octane brand of football that could leave him susceptible to picking of a knock or two. Sanders missed games in 2019 and 2020 with injury, and he missed last season’s opener because of COVID. So, in the last three seasons, Mike Gundy has had to call upon Sanders’ backup. Shane Illingworth, who has backed Sanders up the past two seasons, is gone to Nevada. That leaves Gunnar Gundy, Garret Rangel and Peyton Thompson on OSU’s spring roster to back Sanders up. It seems to be between Gunnar and Rangel. Gunnar got snaps in OSU’s blowout victory against TCU, and Rangel enters as a four-star freshman who needs to fill out his frame.

2. The New Secondary: Kolby Harvell-Peel, Christian Holmes, Jarrick Bernard-Converse, Tre Sterling, Tanner McCalister — all gone. Aside from Jason Taylor, OSU is essentially starting from scratch in the secondary in terms of experience. The good thing is that the Cowboys have a lot of talent in the backend. Korie Black and Jabbar Muhammad each closed their sophomore seasons strong. Kendal Daniels has an elite pedigree that OSU hasn’t had too often in the secondary. Thomas Harper has been biding his time. And guys like Kanion Williams and Trey Rucker have found ways to show out in special teams roles. As talented as all those guys are, it’s hard to imagine them picking back up where OSU’s 2021 defense left off because of the experience factor, so a big spring will be crucial.

3. The Offensive Line: The Cowboys had some offensive line struggles last season, and now they’ve lost Josh Sills and Danny Godlevske. There are some pieces for Charlie Dickey to work with, though. Hunter Woodard was a rock for the Pokes at right guard last season. OSU also brought in four-star tackle Tyrone Webber from the JUCO ranks. But there are still plenty of questions to be had about the group, questions like: Can Caleb Etienne break through at a tackle spot? Will Cole Birmingham move back inside after primarily playing at tackle last season? Who steps up at center? The answers to those questions will go a long way into whether the Cowboys can make it back-to-back trips to Arlington.

1. Running back development: Everyone’s a sucker for some skill talent, and here I’m ready to be transparent: I, too, am a sucker. Truthfully, we all should be, especially when it comes to the running back position. In this offense it’s vital to have at least one talent in the backfield who can be a game-breaker. After losing Dezmon Jackson and Jaylen Warren, it’ll be top priority this offseason. My early money is on Dominic Richardson entering spring as the top dog, but the arrival of early enrollees Ollie Gordon and CJ Brown could change things. And watchout for redshirt freshman speedster Jaden Nixon.

2. New D-Coordinator Changes: Being the guy who follows the guy is an unenviable position. Just ask Mike White at Florida after following Billy Donovan, for instance. Succeeding Jim Knowles at DC is going to be hard. But Derek Mason is a bright football mind with experience as a head coach in the SEC. Smart folks believe he’ll thrive at OSU. The path to success starts in earnest in camp as he takes over a talented defense that has some holes to plug. How will he change the system, if at all? Who steps up in camp on that end of the field? How will he develop players differently than Knowles, and who stands to benefit? Tons of questions here. Tons of excitement, too, but it’s an unknown at this point.

3. Who Steps Up at Receiver? The question here isn’t does OSU have any great receivers? The question is who emerges as the next one? This offense knows how to feature its stars at the position. But losing Tay Martin, it’s going to have to find a new outside guy to slot in as the potential No. 1 next to Brennan Presley. I’ve already kind of called my pre-camp shot — I think Jaden Bray is that dude — but former five-star recruit Talyn Shettron and a host of other more experienced players at the position may have a say here. How this position group settles is one of fascination for me.