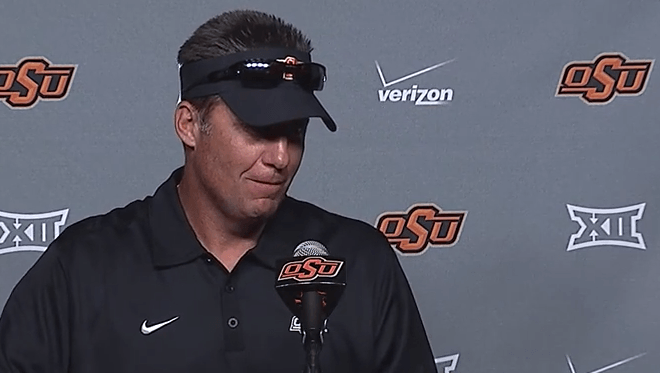 On the game: “I’m glad that one is over. We played very average in a lot of areas. Offensively, not very good. Not running the ball as effectively as we need to.”

On the end of the first half: “I was frustrated because of that and went for it and I should have kicked a field goal. But I was still mad because of the last throw.”

On the Roland TD: “We thought he got in, but honestly at that point, I was so frustrated that I would have been OK if he hadn’t gotten in. But I was glad he got in.”

On special teams: “The good news is our coverage units on the punt and kick were good, and our return units on kick return and punt return were good. We’ve really stressed that over the last 10 days. It really benefitted us and probably helped us win this football game. We have to get a lot better. There’s not any reason for us to cancel practice.”

On foregone conclusions: “At times, we’ve become a little bit spoiled here. We walk off the field in the last few years, we win by 24 and everybody’s upset. Today we won by 17, and everybody’s sad and wants to go home and pout.”

On his defense: “I was talking so much to the offense that I didn’t even watch the defense.” 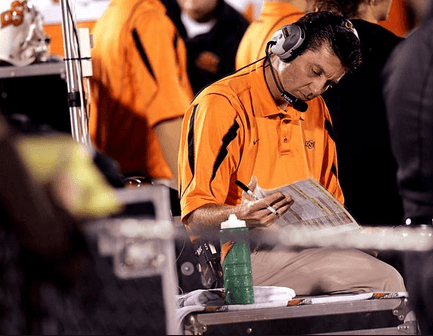 On early starts: “We just didn’t play very well. You get out there—and this no excuse—it’s 11 a.m. and the stadium is half full, the sun is kind of on you. It’s just a lot of things that worked against us. We need to be more mature than that even though we’re young. Our guys have to get their motor going and they have to play fast and compete.”

On special teams: “I took over kick coverage and punt coverage this week, but I’m going to give it up tomorrow.”

On how his defense played: “We talked about third-down conversions. They were at 50 percent because they ran a bunch of third-and-shorts. That goes back to what I said about first-and-10 being the most important down. They fell forward on a couple of tackles and had third-and-two on a lot of them. It’s tough to get your third-down percentage at 65 percent like we want, so we probably aren’t as good on first-and-ten as we’ve been in the past.”

On giving up big plays: “Ashton (Lampkin) was out and Larry (Stephens) was out. It was good. We did some things, schematically, to try and help them out a little bit. That might have been another reason that we gave up some run yardage that I didn’t like. Schematically, when you try to help out and take something, you give up something else.”

On Daxx’s picks: “On the first one the route was off, and on the second one it was man coverage. The ball was thrown on time. You’ve got to give the defense some credit on that. They did a good job and we can doo a better job running the route. It’s a team game, and as long as he’s going through the right reads and throwing the ball on time, you can’t be too critical of the quarterback.”

On the offense overall: “We haven’t reached our peak, that’s for sure.[1. I sure hope not!] Not even close. There’s a lot of room for us to improve, but it was very encouraging at the same time.”

On Daxx: “Daxx is a gunslinger, so that’s going to happen sometimes. The kid can throw the ball, but their defense was making plays. They watch film, too, so picks are just a part of the game. Daxx was calm about it, and we all knew he would go back out there and keep letting it fly. He’s real confident in himself, and he’s confident in all of us, which is a great thing to know. It doesn’t matter how many picks he throws, he’s going to keep letting it fly.”

On OSU’s run game: “Oklahoma State has effectively run the ball against us in the past and they did a year ago, embarrassingly.”