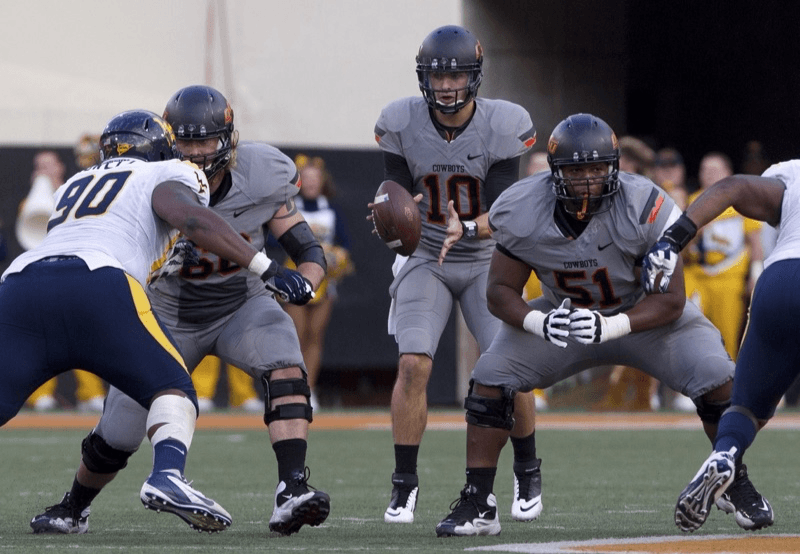 Before we get to the 10 best uniform combinations Oklahoma State wears, we need to look at the five worst. I know everyone gets hyper emotional about this stuff so let’s try to keep the comments section below an 8 on a scale of 1-to-Dez’s vocabulary in the heat of battle.

My feelings have changed mildly from when I ranked every combo last season (never again, by the way) and I’ve flipped a little on the gray threads. You can look at my bottom five from last season here.

From sort of bad to worst, here we go…

With more combinations than dollars left on Travis Ford’s contract, I don’t want to see anything this year I could have just as easily seen in the pre-Gundy era. This was the Justin Gilbert return game. Anyway, I’m not a gray hater. I like the gray when used properly. It’s not used properly here. The only way it could be worse is with a gray or orange helmet. At least there was enough sensibility to throw the black lid on. It should work, but it doesn’t. (USATSI)

As I sit here critiquing OSU’s threads, I’m also looking at Louisiana’s Russell uniforms with the MS Paint decal on the sleeves realizing it could be much, much worse than it is. Nope, the black helmet doesn’t make it much better. (USATSI)

The RG3 game in Stillwater. I’ll never get over how bad these helmets were. I actually don’t hate the orange and gray together but the helmet just destroys the entire combination. Not much else to say here so it seems like a good time to remind you that the combined score of the last five OSU-Baylor games in Stillwater is 263-99. There are a couple of variations of this because the helmet can be changed, but this one is by far the worst. The “just picked this lid up at Chris’ University on the way in” Pete helmet just does not do it for me at all. And the all orange should work, right? It doesn’t. It works even less than it does in basketball (where it also doesn’t work).