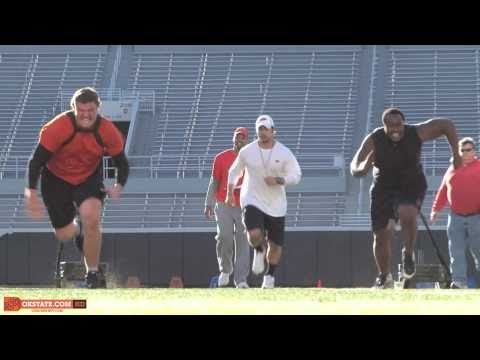 What They’re Saying
1. Rivals has a spring preview for OSU – “Oklahoma State only lost twice last season, but allowed more than 40 points in both of those games. Clearly, upgrading the defense is a top priority this spring. The offense has a full arsenal, but needs the spring to get in sync with new coordinator Todd Monken.” (Rivals)

2. Blake Weidenaar named Big 12 newcomer of the week – The transfer from Southern Nevada went 9-17 with 4 RBI in the DQ tournament the Cowboys won last weekend. (okstate.com)

3. It sounds like the inmates are running the asylum with all the players teaching all the new coaches the plays – Not that that’s a bad thing when your “inmates” are Brandon Weeden and Justin Blackmon. (News OK)

5. Chatmon talks about Blackmon working on his route running – It’s weird to think that Blackmon isn’t really developed yet as a receiver. He’s obviously an incredible athlete but he probably doesn’t fully understand the position yet. I also don’t think it’s pragmatic to believe he could top last year because in a lot of ways that was just the perfect storm and if he does he will have basically put together the best two year stretch of any collegiate wide receiver in the history of the sport. (News OK)

6. Bill Haisten with updates on Kye Staley and Daytawion Lowe – I really hope both of those guys make it all the way back. (Tulsa World)

8. Here’s a video highlight of LeBryan hitting a halfcourt shot against South Oak Cliff – You can tell from the video why I’m not sold on him as he nearly accosts the referee in his way of celebrating (by the way, this wasn’t even to win the game). (Vype)

Quote to Note
Justin Blackmon on 2011

People know the name, but it’s going to be the same way