Stephanie Wei writes that another uppity golf official took exception to Rickie Fowler’s backwards hat the other day, but this time the official wasn’t wearing a green jacket. She also interestingly notes that she thinks Fowler is currently the PGA’s biggest current non-Phil/Tiger draw. (Wei Under Par)

OSU pours it on against tOSU in Columbus yesterday. Problem is we’d need about 29 more of these to even begin to make up for the 04 Alamo Bowl. (okstate.com)

The best Big 12 news of the spring (even better than the $89742 billion TV deal), Gus Johnson will begin calling regular season football games. Actually maybe this is bad news, I don’t need any other stimulants for my heart during OSU games — I think Bill Young has that covered. (New York Times)

This KU/Bill Self video is unbelievable. My favorite part is when Self turns from the side to look at the camera and almost starts dying laughing at his own absurdity…

Big thanks to twitterer @ButflBrwnBbyDol on the following classic pic which I somehow missed from the weekend: Garth Brooks in his MBA cap and gown. Congratulations Garth, on getting your undergrad the same year I was born and your Masters after I got mine. Well done. 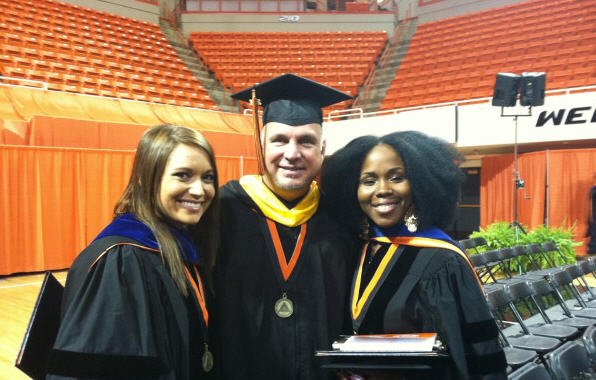