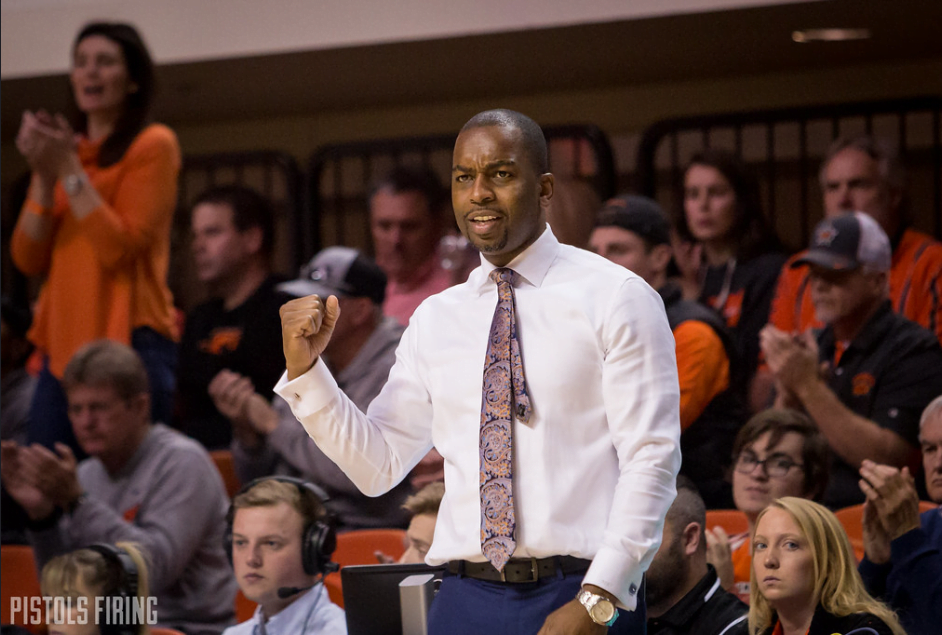 STILLWATER — The Cowboys get a change of pace this weekend before continuing their Big 12 grind.

Oklahoma State travels to Texas A&M on Saturday for the Big 12/SEC Challenge. Mike Boynton met with reporters after his team’s practice on Thursday evening. Here is a breakdown of what he had to say.

• On Chris Harris’ decision to come to OSU after initially signing with Texas A&M: “I’ve known Chris for, probably since he was a freshman in high school and watched him and several of his friends play throughout their careers and recruited that area pretty hard. I’ve always admired his work ethic, his basketball IQ, savvy.

“We didn’t think we were going to be able to get him. When we were recruiting in the fall of last year, we didn’t sign him. We still had a fairly large class. We had four guys signed, I believe, in the fall. He had committed to A&M. I just kinda still watched him. Obviously the coaching change (at A&M) happened in the spring. We had some changes in our roster. The opportunity just kind of matched. I’m glad that he’s here.”

• On A&M: “Usually as you get into conference play, you don’t really pay that much attention any more to out-of-conference teams. So, I really haven’t watched a ton of them, but obviously I’ve dove into some yesterday after the Iowa State game. They’re a team that you can tell is finding its identity. They’ve played much better basketball the last three weeks than they did the first five or six weeks of the season.

“They’re very physical. They don’t play at a great pace right now. I think they’re trying to manage possessions. They do a tremendous job of drawing fouls. They have a center who’s shooting like 75 percent from the field. He’s getting to the free-throw line, and he’s scoring a lot of points around the rim. We’ve gotta have a gameplan for him. We’ve gotta keep ourselves in transition offensively to try to negate them keeping the game at a slower pace.”

• On the younger guys’ mentalities with the winless conference start: “The record is what it is. No one’s happy about it, but I don’t get the feeling that they’re feeling sorry for themselves. If it’s gonna change, it’s gotta be us. We’ve gotta make it happen. Our approach is to come in and practice hard.”

• On Jonathan Laurent, who didn’t play last week before playing solidly against Iowa State: “For him, it’s been a hard transition. He hasn’t really been able to find himself within our program yet. In his defense, he’s been as good a teammate, he’s been as coachable, as committed to helping our team as anybody has. That’s really hard to do when you’re 23 years old and this is really your last chance and you’re sitting on the bench watching some freshmen, who, quite honestly, probably aren’t ready yet. They’ve got talent, you can see it from time to time, but I could see how it could be frustrating. He’s had a great attitude, and he’s continued to work hard. He’s continued to put together good practices.”

• On Cameron McGriff, who has 999 career points: “(1,000 points) is tremendous, it’s a great honor. I never got there. It’s a great accomplishment. It obviously means that he’s been on the court a lot during his career and has been able to find ways to have success and a lot of times, under-sized at his position for his whole career. A testament to him buying in trying to help us win however he can.

“His work ethic, he’s improved greatly over the course of his time here. He came in as just an athlete, a guy who can run up and down the floor and dunk. Now, he’s still not the best ball-handler, but he can rip-drive and get downhill because of his strength. He can obviously get going from 3. He hasn’t shot it as well this year, but a guy who is going to continue to play basketball for a while and probably make good money doing it.”

• “We won’t change the goals. At this point, you commit yourself to it and try to make the most of what you can. I don’t think there’s a need to focus on the tournament. I don’t think there is ever a need to focus on that. The focus needs to be on, let’s try to be as good as we can on Saturday. Let’s try to go 1-0 then, and if we can, then we’ll come back and figure out what we did well, try to build on that, clean up some things we didn’t do so well and then get ready for the next one. We try to keep them away from the big picture because I think that’s where you get lost. You lose focus on the things you gotta do every day to get better, and that’s going to be true for every team in the country, Baylor who’s No. 1 or us who’s 0-6 in league play. It’s gotta be a focus on improvement throughout the season.”

• On Cade Cunningham being named a McDonald’s All-American: “It’s a big deal. I don’t want people to think I’m disregarding this year’s team because I’m not. Our focus is totally still on trying to maximize what we can be this year. But we’re not going to ignore that it’s a big deal for us to get a kid who’s of his caliber, who decided that this is a place he believes he can achieve the type of goals that he wants to. He’s going to be able to help not only the guys that will be coming back next year be better, but it’s going to allow us to continue to mine those fields where those high-level players are and show them that there aren’t just a couple schools you can go to and have success. Oklahoma State is one of those places where you can have the biggest of goals and still be able to go there and feel like the process will be exactly the same as if you went anywhere else.”

• On the brawl between Kansas and Kansas State: “It’s unfortunate. Obviously I don’t know why or what happened. I certainly hope we’re never in a situation where we have to deal with something like that. I know both coaches really well. I’m sure neither one of them condone that type of behavior. It’s unfortunate for our league that two pretty well-known teams, that that would happen. It’s unfortunate. The truth is, everybody has an opportunity to learn. They’re kids, not that it excuses the behavior, but I was 19 once and in the heat of the moment made bad choices. I hope that somewhere, we still can have compassion for people making mistakes at a young age, especially in a heated deal.”