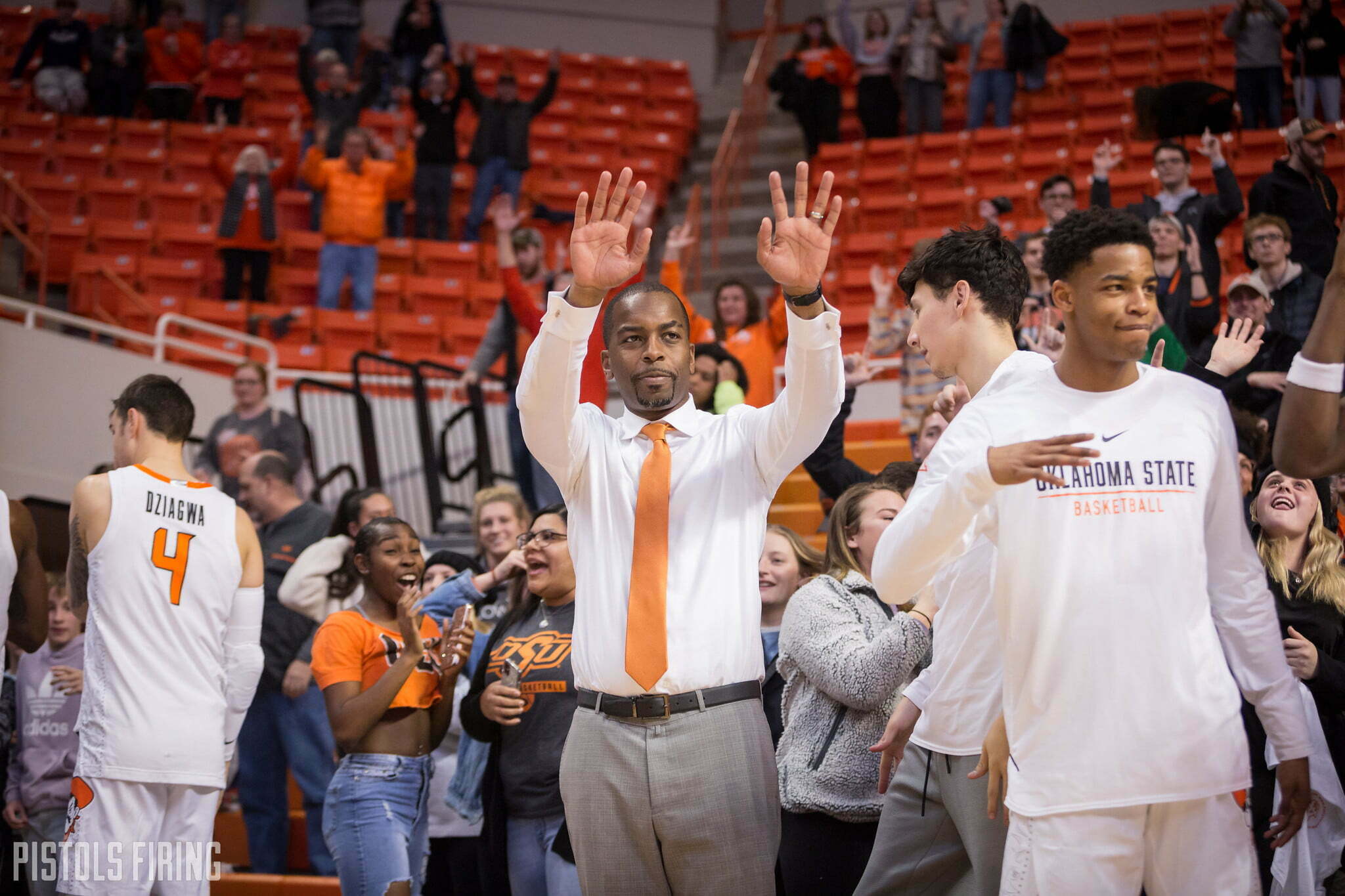 STILLWATER — The Cowboys will spend their Valentine’s Day on a dinner date will the 1995 Final Four team.

Oklahoma State coach Mike Boynton met with reporters after his team’s Thursday practice and stated his plans for one of his least favorite holidays was to, “give Big Country a big ole hug.” Here are some of the highlights from Boynton’s media scrum.

• On what he was thinking when Yor Anei had the ball on the perimeter with the shot clock running down: “This is his moment. He’s been talking about it since the summer that he’s a combo guard. He’s pretty convinced that he’s a pretty good 3-point shooter. I knew he was going to shoot it, and I knew if it went in I would hear about it. I’m glad he didn’t take more.”

• On if he did in fact hear about it: “Oh, of course. Immediately after the game was over and we got back in the locker room he let me know that he needs more shots, more 3-point shot plays run for him.”

• On getting the basketball from the Remember the Ten memorial: “That’s one of the things I admire most about being here is how people just embrace one another, certainly in the most difficult of times. The symbolism of being connecting to those people even more now is something that I’ll always cherish. I think they change the ball out every year. Someone from the university drives out and replaced the ball. To be able to have one that’s set out there in remembrance of the crash site is pretty, pretty special.”

Powerful moment after today’s practice. @RT10Run co-chair Jason Pogue presented @thacoachmike with the ball that was on display at the #RT10 memorial in Strasburg, Colorado.#LetsWork | #GoPokes pic.twitter.com/bZMcnKQHWf

• On Jonathan Laurent: “I think he’s finally gotten comfortable in what his role is in some ways and not overthinking whether he has to make every shot or not make a mistake. When you get to that point where you have freedom of your mind, it makes the game easier. He’s just been playing really aggressively, getting to the basket, finishing better, getting himself to the free-throw line. That’s something that we need.”

• On Texas Tech: “They’re playing really, really well. They’ve done a great job here the last, really three years. The second half of conference play, they’ve really taken off offensively. I think in the last five games they’ve had at least one of their starters have 18 points. All five of them have done it in the last five games. In a couple of those games multiple guys have. You can tell they’re getting into a great rhythm offensively. We’ve gotta try to disrupt that a little bit. Their defense has always been really, really solid.”

• On OSU being 11-0 when Anei scores in double figures: “There are a lot of stats like that. Cam (McGriff), I think, has shot four 3s and 23 free throws in the last four games, and we’ve had more success that way, too. I imagine when Ice (Isaac Likekele) gets to play 35 minutes or more, our chances of winning go up as well. So, I try not to single out one but find the right combination of those things. But I know we’re 1-0 when he makes a 3.”

• On beating Kansas State despite shooting only eight 3-pointers: “We talked about this as a staff, sometimes you can lose being stubborn. I was pretty convinced that we’d be a pretty good shooting team. I thought just the pieces we’ve got, guys’ reputations coming into the year, Lindy (Waters) and Thomas (Dziagwa) were both in the top five in 3-point shooting in the Big 12 last year. It just hasn’t manifested itself, so we’ve kinda had to try to invent different ways to have success. For us, this team has to go inside a little bit more, not necessarily posting up but driving and getting to the free-throw line. When we do that, which we’ve done most of the games we’ve had success, our numbers are much better offensively.

“Sometimes the criticism of our offense is we’re not moving the ball. Well, we are, but if the shots don’t fall, right? The end result is really what most people see. Either shots go in or they don’t, that’s how they determine whether the offense is good or not. We look at the process that we’re going, which we feel like we’re in a pretty good groove right now.”

• On what he takes from his team from the last Tech game: “There’s some positive and negative things that we can build from or learn from. It winds up being a blowout. It’s a six-point game at halftime. We get a stop and score to start the second half. It’s a four-point game the second possession of the second half. Then they went on a run, and it was mostly due to our poor offensive execution and their transition. Those are two things we really tried to focus on is executing better offensively and giving ourselves a chance to guard then in transition. Then we’ve gotta rebound the ball better.”