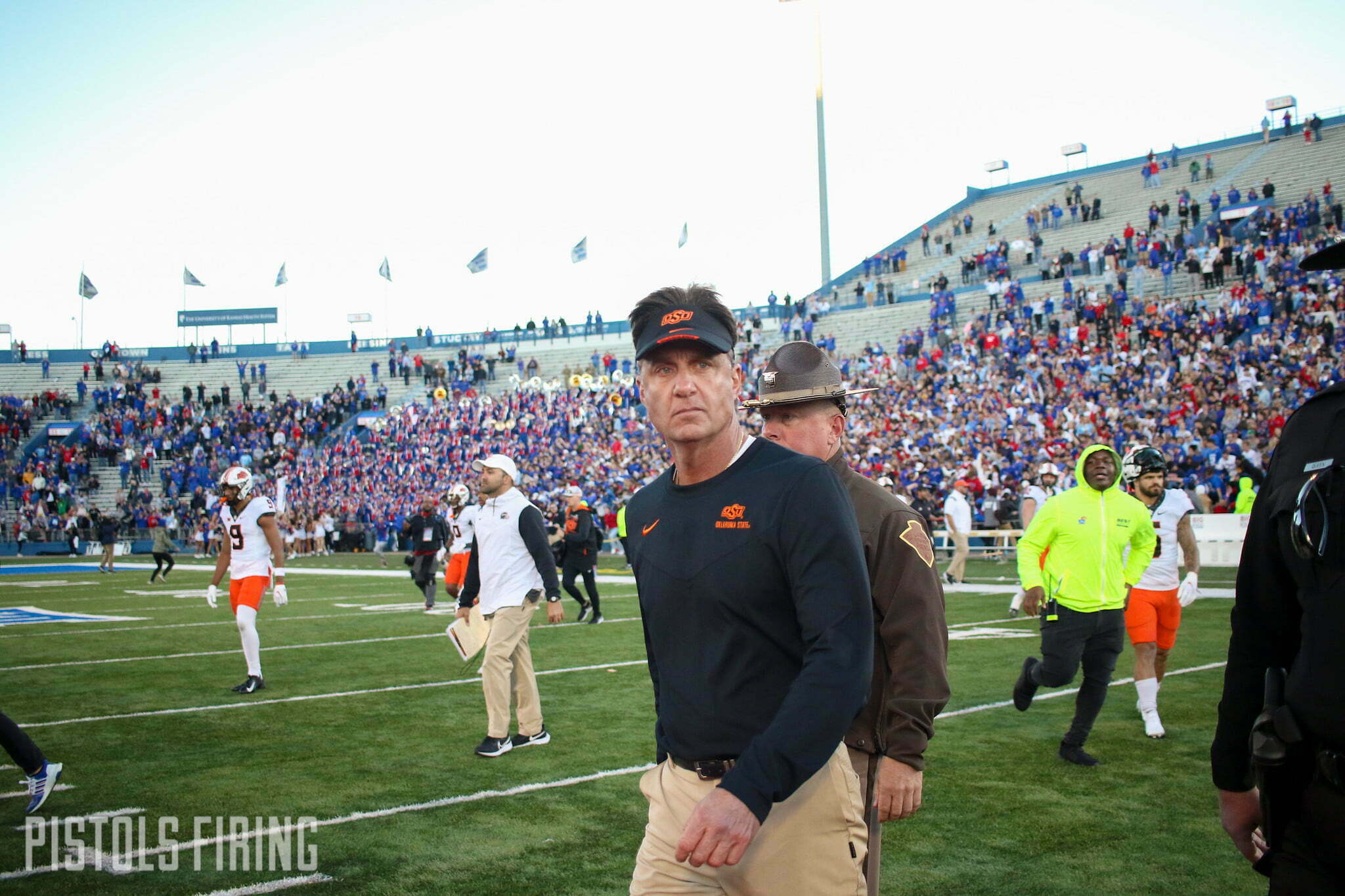 LAWRENCE, Kansas — For the first time in his tenure, Mike Gundy has lost to both Kansas schools in the same season.

Oklahoma State fell to Kansas 37-16 on Saturday at David Booth Kansas Memorial Field. Here is everything Gundy said after the game.

“We’ve got to keep working as a team. We gotta find a way to slow down the rush, and then we got to find a way to rush the ball a little bit. Gotta tackle a little better, gotta tackle a little better. Obviously, turnovers made it difficult for us today. We were minus several in turnovers, but we got to be able to defend the rush on defense. And then, you know, just keep working, try to get a little better in the running game on offense. So, I told the guys the same thing. I said, ‘Look, we gotta go back to work and work hard this week. Get ready. We’re gonna have another game at this time next Saturday.’ And so, I told the leaders we need guys to step up, dig down deep, find a way to practice hard and get ready to go play another one next week.”

On the defensive struggles

“Oh, we got to do a better job of stopping the run. It starts with being able to stop the run, and that’ll help us with some of the play-action pass. And we need to tackle better. I didn’t think we, you know, from a distance without watching it, I didn’t think we tackled very well. But, I would say it starts with we’ve got to be able to stop the run.”

“I would say it’s probably a combination of both. You know, we get somebody hurt, we got to put other guys in. We’re rotating quite a few guys in right now because of that. I mean, it doesn’t help us. But, you know, whoever goes in, they practiced, we expect them to get lined up, make plays and tackle and get guys down.”

“Well, what we did with those two guys is we graded everything they did in practice all week, and he had just an ever-so-slightly better grade than Gunnar. So we started him for that reason. Once he settled down, he made some plays. I mean, obviously turnovers are difficult, but he made a few plays. You know, I’d have to look and watch the tape. a little more difficult to see offensively, you know, from that perspective. But he made a few throws, yeah, but we’d like to be able to minimize turnovers.”

On Rangel responding well after turnovers

On defense being the issue in the loss, not quarterback play

“Well, they rushed for 350 yards. And so, it’s going to be extremely difficult to perform well as a team and play when you give up those kind of rushing yards.”

“Oh, I heard of one scheme that was different that we hadn’t seen, maybe they got it during an open week. But, I didn’t think we tackled very well. I thought in the open field we had a chance to get guys down. We didn’t do a good job of tackling.”

On whether Oklahoma State changed anything at halftime to adjust defensively

“Yeah, a couple things. But, I would have to wait on that to get out there until I watch the tape to see exactly on that. But there was a couple things that we tried to make adjustments on. I still think I’m gonna lean back, we didn’t tackle very well. But we’ll have to see after I grade the tape.”

On whether poor tacking is a product of defenders being tired

“I didn’t see guys not trying, I didn’t see effort problems. It almost looked like we just weren’t fundamentally good at wrapping guys up and bounced off and got our head down at times. And that’s difficult. You know, when you get guys in space like that you got to be able to get them down.”

“Well, you just keep working on it. It’s not hard to improve, we just need to stay consistent. We need to stay consistent with our drill work and be aware of what happened and why it happened. I think the most important thing, whenever you come up short is to identify why it happened, and what some type of a short-term solution to get better for next week. I think that’s really where you’re at at this time.”

On whether the run game struggles defensively are at the line

“Well, I think it’s everybody. I wouldn’t say it was — you know, it’d be hard to say exactly. But I think there’s times as backers, we missed tackles. I know there’s times as D-linemen we missed some tackles. So I think it’s just kind of everybody contributing. They just need to clear the mind, settle down, see what’s happening. You know, be able to run, tackle and wrap and get guys down.”

“Oh, I don’t know necessarily a struggle, but when you start to lose a considerable number of players and replacing people then things get a little more difficult. How difficult can they get? I don’t know that any coach ever knows. You’ve got to go play the games. But, you know, when you’re starting to work guys that are inexperienced and young and then you’re shuffling guys around, you know it’s gonna be a little more difficult.”

“Well, we go through the same thing with him. This has been a few weeks now, we try to decide late in the week where we’re at with him. And we just felt like that he wasn’t quite ready to go out and play in this game.”

“We would have to reevaluate him. We reevaluate all those guys on Monday.”

“I would hate to put a guy out for the first time early in his career and then make a couple mistakes and yank him. I don’t know that there’s any right or wrong, but I think you give them a chance to fight through some stuff versus — that would have been with nine minutes left to go in the first quarter. So that would have been a little difficult in my opinion.”

On what he told Garret Rangel during and after the game

“I talked to the team. I haven’t visited with him yet. But I was telling him during the game, ‘You’re doing good.’ Just normal.”

On getting the players to focus after back-to-back losses

“I hope they respond. That’s kind of the way life is, you know. We try to teach them that. And we have a culture that should extend itself to them to understand that sometimes things don’t go your way. They have to understand that we all start over again tomorrow morning. We have another game, like I say every Saturday to ya’ll. Guys have to get ready to go. I challenged them. I challenged the leaders and mature guys. We all face adversity in life when things don’t go our way. That’s just kind of the way it is. One good thing about college football is that’s what it teaches them. So, I would expect them to be critical of themselves, and I expect the coaches to be critical of themselves in grading tape. Looking in the mirror and saying, ‘Okay, here’s what we did. Here’s what we can do better,’ and come up with some answers, and practice well this week. It sounds simple, but there really is no other alternative. That’s the only way.”

“Nah, we just have to come up with plans. We did the same thing this week that we’ve done my 18 years here. We came up with plans, we practiced, we did everything the same way we have. They made some plays, we didn’t. We missed some tackles, didn’t protect as good at times, we turned the ball over at times, but we did the same things that we’ve done my 18 years here.”

On run game struggles on offense and blocking

“Well, I don’t think there’s ever a time they don’t know who to block. I think there’s times that maybe they slipped off, fell off blocks, so on and so forth. That’s another one that’s difficult for me to talk about, because once they all get jumbled up in there it’s hard for me to see. When I watch the video and run it back, I get a better chance to get a feel for what’s going on.”