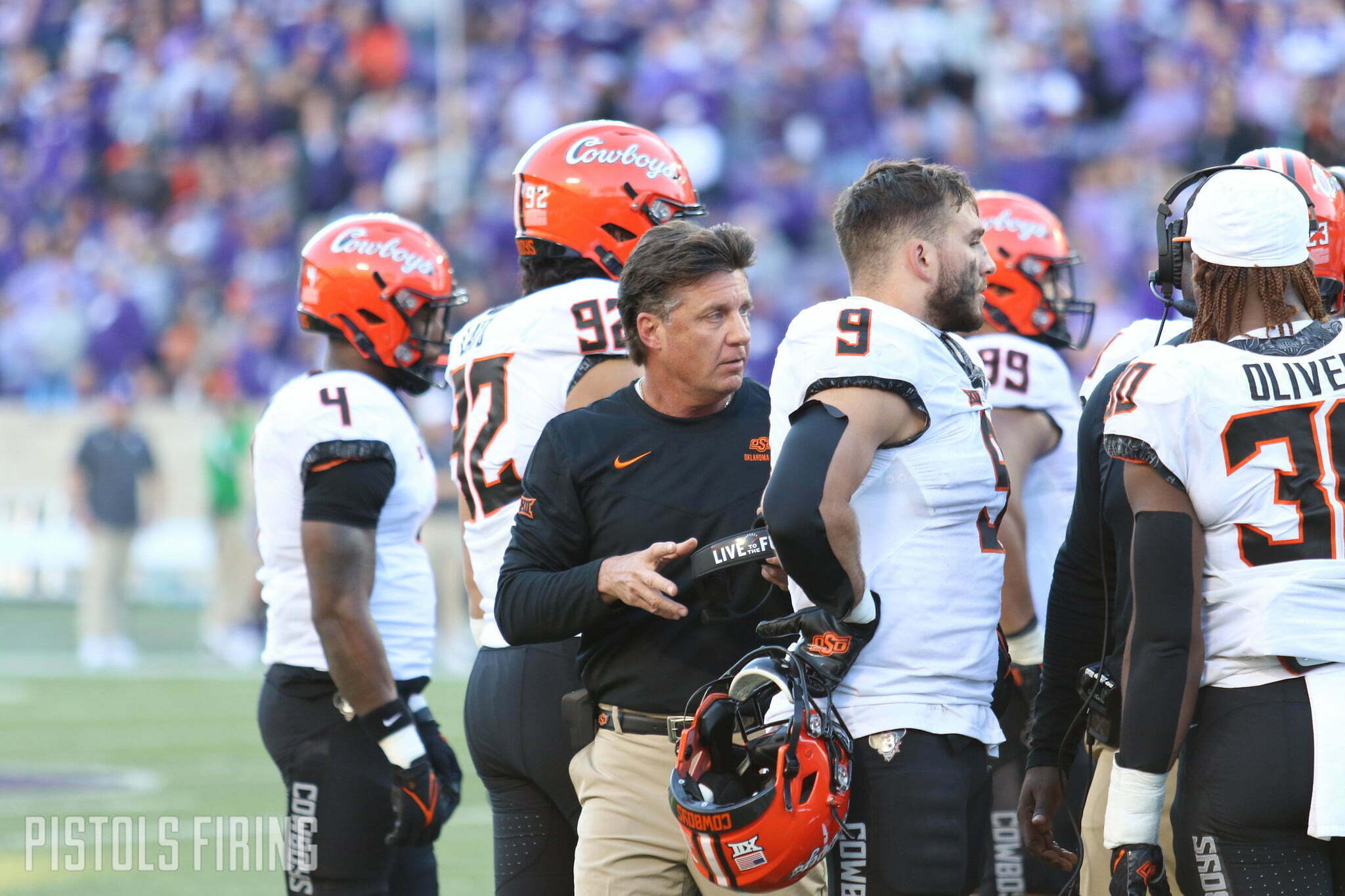 Oklahoma State fell to Kansas State 48-0, marking the largest deficit the Cowboys had lost by under the 18-year coach. It’s also just the third time the Pokes have been shutout in the Mullet’s reign. Still, Gundy faced the music after the game. Here is everything he said.

“Obviously there’s not a lot that I need to say we. We got our butts kicked. I told the team, I’ve had my butt kick before. I didn’t do a good job this week. I was concerned about a variety of things this week. We didn’t practice like we normally practice and that’s my fault. And that’s what you get. I apologized to the team. I didn’t handle our team very well this week, and I’m not taking anything away from Kansas State. They’re a good team and they played really well. I don’t know, you’d have to ask coach, I don’t know if they could have played a better game than they played today. And then we weren’t prepared. We just weren’t. We weren’t very physical upfront. We couldn’t do much to balance ourself offensively. We just, we weren’t prepared and it’s really pretty simple. And I’ll take responsibility for that. I learned a good lesson. I tried to do a couple things different and obviously I’m not gonna do that again.

“So, I told the guys, you know, sometimes that’s the way life is. Not quite as fun as it was last week. But, as I say every Saturday, ‘You’re gonna play again about this time next week.’ So guys need to recover, get home, come back to work tomorrow, get ready to go. We don’t have any time to waste. We have to identify what happened in certain instances and come up with solutions and plans and put them in place and move forward. And I’m repeating myself now, but I’ve told the guys, I’ve had my butt kicked before. Not any fun, but we know how to fight back and we will. Guys need to stick together, and get ready tomorrow. Six days to prepare for the next game.”

On concerns he had in practice that led to changes

“We just had limited numbers at spots. So, I got concerned about maybe getting a guy beat up in practice, maybe with some numbers. And so, we didn’t practice like we should have. It’s my fault.”

On what was most concerning about the game

“That’s almost a joke. Everything. I wouldn’t even know where to start. We didn’t slow them down on defense, couldn’t score on offense. And we were okay in special teams. Actually we were really pretty good except for one tight punt. There’s just a lot today. We just we didn’t play good. We weren’t prepared. You saw a team that wasn’t prepared and that’s what we get.”

On whether he thought about taking Spencer Sanders out earlier

“Nah, Spencer wanted to play, wanted to compete. He has the right to do that, and so until then we let him fight.”

On getting over the loss psychologically

“I think that’s a great question, but that’s life. We talk about it all the time in our culture that sometimes things go your way, sometimes they don’t. Good news is it only counts as one loss. Am I concerned about ’em? Yeah, for 24 hours. But, college football is a great teaching tool for life. Tomorrow they need to learn to fight back when their backs are against the wall from not playing in a good game. So, the reason people will feel this is so much more impactful than maybe before is because we’ve won a lot of football games in this program, and that’s what people expect every weekend. And so, got our butt kicked today, got out coached, and they made more plays than us. But, I’m not really concerned about them. What we need to do is come up with a plan for things we did wrong coaching-wise and in concept-wise and and player-wise. That will be more of a boost for us than anything.”

“I don’t know. I mean, you watched the same game I did. As we went on and you couldn’t establish anything offensively, you get your back to the wall and you come you become a little bit one-dimensional. That can be an issue. And then what that does is that allows the play caller for the other team to dial up plays much more comfortably than in a situation where it’s a one or two score game.”

On the defensive line

“I think some. Again, I would have to watch the tape and really get a feel for what’s going on. I would hate to step out there right now without watching the tape. To give a fair assessment for the guys.”

On whether the way Oklahoma State practiced led into the difference of physicality in the game:

“Yeah, that’s what I started with today. I altered what we’ve done practice-wise, and I learned and made a mistake. I certainly thought it was the best thing to do or I wouldn’t have done it. But, obviously sometimes I’m not always right.”

“Well, I think the thing you mentioned earlier is that — gosh, I don’t know. We really haven’t had to do a lot of what would maybe be mental recovery in the past here. Like I said, we’ve been playing good football for a long, long time. So, the challenge for those guys, not just the players, but the coaches is to come to work tomorrow and when you evaluate and look at what happened, it’s difficult, because it wasn’t fun and there’s not going to be a lot of success. So, the 14 or 16 hours that we have tomorrow to work as coaches won’t be much fun. But they’ll be very important to come up with answers and solutions the best that we can to move forward. Have a good workout tomorrow night. They get a day off Monday and then come back Tuesday and get some work done.”

“I’m not sure. You know, I’m not comfortable in commenting on players injuries at any point. And so, hopefully we’ll know a lot more on some of those guys on Tuesday.”

“Again, I would have to watch the tape. I can generally give you a pretty good idea. We didn’t have much success at all. So, I would really hate to step out there until we look at the tape and kind of see where we’re at and get a better feel for what happened.”

“No. They ran their stuff. Same stuff that we saw on tape.”

On what he altered in practice

“I’d rather not talk about it. I don’t want to discuss the details of what we did. I thought it was best, but it wasn’t obviously. We weren’t prepared to play.”

On whether Tom Hutton is OK

On why he altered practice

“I just was concerned about maybe getting another guy nicked up or banged up in practice. So, I altered some things. We weren’t as physical and I didn’t do a good job. I should have just stayed the course. I should have just stayed with where we were at. That’s what I said earlier, you may not have been in here, but we changed a few things. And if I had to do it all over again, I certainly wouldn’t do it. But I gotta do a better job of preparing them. I’m not going to say that we played good, but it starts with me and I gotta do a better job getting them ready. I was wrong. I was wrong last week.”