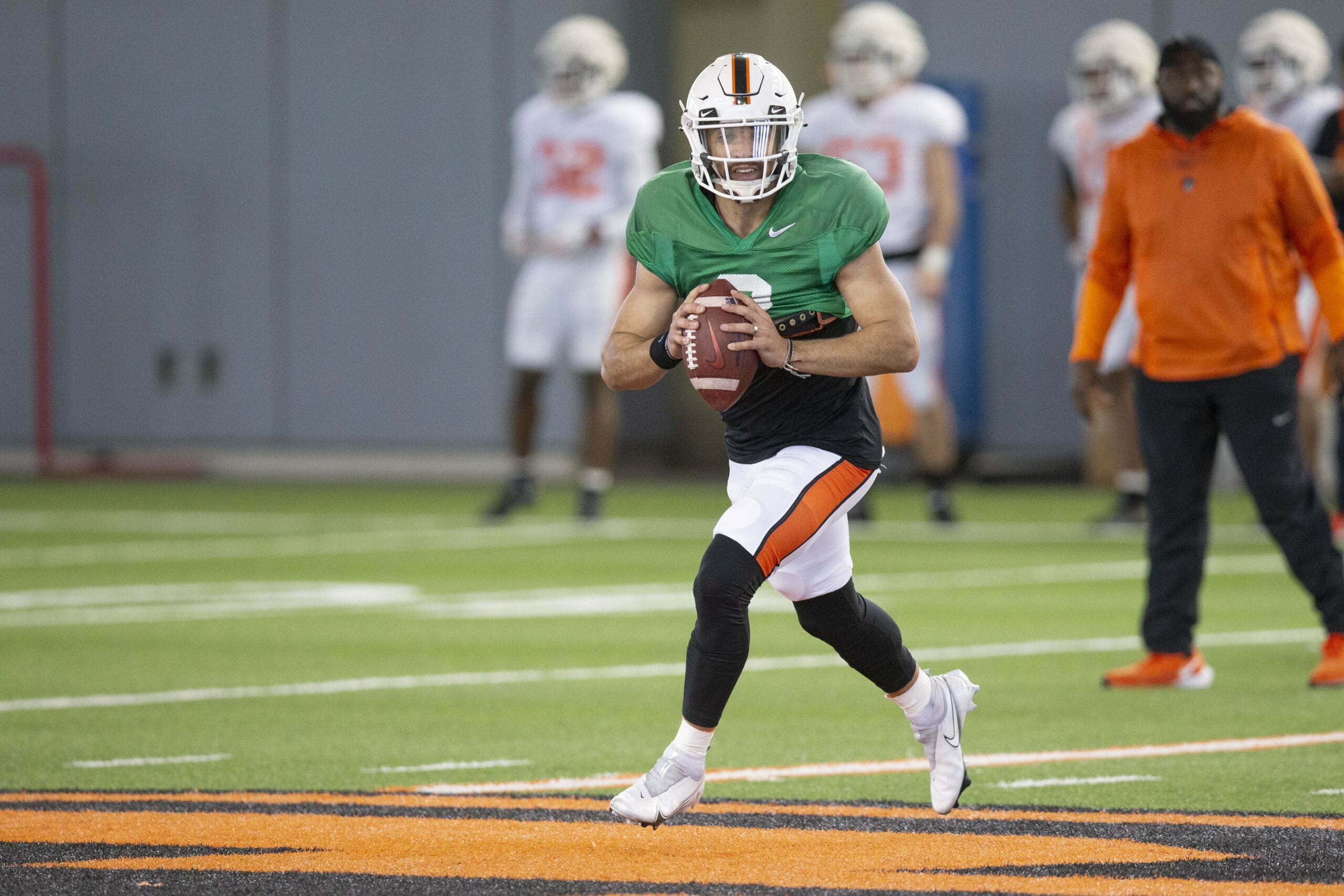 Tuesday was the Cowboys’ fourth spring practice this year, but it was their first in full pads.

After the practice, Oklahoma State coach Mike Gundy met with reporters to talk about how things are going. Here is what he said.

“Finally got in pads. Get to play real football, which was good today. I’m excited about watching the tape. We’re getting a lot of reps. I might have mentioned this last week, but on most springs, we have between 85 and 90 players. Right now I think we have 112 out there based on so many early enrollees, transfers and then the super seniors. We’re able to get a lot of reps. Even our young players and new players are getting really quality reps. That’s an exciting time for us, and I’m looking forward to watching the tape and seeing what guys do.

“Their attitudes are good. We got a long ways to go, but we’re competing. We’re telling them, ‘If you make a mistake, it’s OK. Make it full speed. Take a lot of pride in what you do. Continue to work hard.’ So far we’re getting that from the players.”

“Just off hand in my notes, we really talked a lot and worked hard in the offseason walkthroughs in meetings with pass protections. We weren’t a good pass protection team last year. I thought today we were better. Again, it was early, and I haven’t seen the tape, but it looked like we were better in protection, which will allow us to be a better run blocking team.

“We have a lot of young players that are getting quality reps, and I will say that it’s fun to watch the third group, which in most cases are guys that have never played at this level, they’re early entry guys, functioning pretty well as a third group in the offensive line, which is the most difficult part of spring ball.”

“Once we get into live scrimmages, Malcolm won’t be in there much. He’s like a 10-year vet in the NFL. What he did do, though, in the offseason was develop his body even more. I think he was 224, he ran, I believe, 4.49, 4.51. His strength levels are through the roof. So, physically he’s even developed himself more. As we know by watching Olympics, the male body continues to develop up to 26, 27 years old, so he’s still developing. He’s helping teach the younger players. Schemes — I would be pretty safe to say he’s got it all down, but his leadership and his input with the young players should be valuable.”

“I can see the big picture, but I very seldom can see guys individually until I watch tape. I’m really excited about both sides of the ball, the development of our young players. I’ve been involved with 35 college spring practices in my career, player and coach, and I think this is the first one we’ve been able to use a third group and they’ve all functioned and looked normal. That’s good for our program. That’s good for the future, and it’s good for those young players that get a chance to play, to show ‘Hey this is what I can do, I’ll play hard, I’ll compete.’ It’s pretty cool too. Their moms and dads call and say, ‘How’s it going?’ They can say, ‘I’m getting out there and getting to play. I’m not just standing there watching.’ So, that’s pretty cool.”

“They can bring a lot to the table. There is no substitute for experience, and there is no substitute for reps. The young players that are getting a lot of work, the game’s moving really fast for them. We were just visiting with Nick Martin, the backer that’s an early entry guy and getting some time, and he had commented to somebody that, ‘When I was in high school, I pretty much had everything figured out.’ He said, ‘Now the ball is snapped, and there’s guys going everywhere and they’re going really fast.’ That’s the progression that young kids go through and develop. That’s why these reps are so good. So, the older guys like Malcolm, Devin Harper, who could help, he’s not out there now because we’re holding him out because of his shoulder, but he can give a lot of input from a reps standpoint. Builds team camaraderie, builds your culture, builds your cohesiveness of your unit, which is important as that progresses because after the summer we’ll find out where we are as a group in August.”

“That’s a great question because you saw what he did in the bowl. So, if you just play the numbers, repetition wise, seeing it, watching video, he might have hit that at game five, but we didn’t have spring. He played two months, September, October, catch up, figuring out what’s going on because if you remember in watching our games, he would do things in the game and then like drop the ball. He was in the right spot, but things just move fast. Because he didn’t get last spring, he finally started to come on in the end of November and then had a good bowl game, all those reps start adding up. He was getting all of the reps in practice. He just hadn’t done it in competition, and that’s an example of what I’ve been talking about.”

“He can do a lot of things, we know. You can pull out his high school tape, he can catch it, he can run it, he can throw it, do a lot of things. He’s got his speed down now. I think he was a 4.51 guy. We need to be able to bring him into the offense in different ways because he’s so versatile, and he’s a quick learner. But again, this is not an easy game to learn without quality reps and with him not being in that spring, took him until the middle of November to get going instead of maybe what could have been the middle of September.

On how transfers Danny Godlevske and Jaylen Warren have looked

“Well Danny’s doing good upfront, seems to be doing well. Again, today was the first day we were in pads. The first three days, other than assignments, not really a chance to evaluate him. Some of the other guys, particularly Warren, seem to be doing well. Those guys have two and a half to three years of experience of playing at this level. So, those are valuable reps for those guys, and that should play dividends for them earlier than the younger kids because they’ve already been there and done that.”

“Spencer and Shane have had a lot of work, and they seem to be doing really well in their reads at this time. That’s one thing we can get out of these practices because their reads are going to be the same with pads or no pads. They seem to be doing very well. Spencer is, I would say, further ahead now than he’s been in his career. Shane’s still learning. Just because he played last year, he’s still learning and getting better. It takes him time to come on. So, they’re getting quality reps and a lot of them.”

On being so deep at running back with LD Brown, Dez Jackson, Dominic Richardson and Jaylen Warren

“It’s a really good thing because we know all four of them can play. They’ve proved that they can. The difficult thing is how do you get them all work. The good part of that is, unfortunately, that is the most violent position to play in our level, in my opinion. Those guys get beat up. So, that gives a little depth, and it should allow them to stay healthier longer throughout the season. I think Dez carried it one game like 30 time, 34 times. That’s too many times. Now, he was rolling pretty good. The thing you do with running backs is they all want to get a lot of reps, but if they do have enough ability to play someday at the next level, their bodies become a precious tool. So, they need to protect them. When they’re in the game, they need to roll, but the fewer hits they take over their career is better for them and us. That’s where the advantage comes in at having depth at that position.

On the potential of playing spring scrimmages against other schools

“It would be good for us to scrimmage Arkansas. You’ve got Nebraska, you’ve got A&M, there’s teams around that would be good to have a spring game, spring scrimmage where you would do like the NFL, do some inside, do some 7-on-7, do some team. I would be for that, just from a numbers standpoint. What happens is, when we get into the spring game, on most year’s we don’t have enough depth to have a real good spring game, so the reason we haven’t had one in awhile is because I think it’s not favorable for the fans because we don’t have enough depth and then you can’t function. If you were to play a game against Arkansas, or Nebraska, or A&M or somebody, a practice game, you could get really quality work. So, I would be for that in just short notice without thinking through it.”

“Well we had a lot of young lineman, unfortunately, that got reps that weren’t ready for reps. All three of those guys — [Hunter Woodard], [Preston Wilson] and [Jake Springfield]. Defensively, we were pretty mature. We didn’t really play many underclassmen. And then Shane, Shane got a lot of reps where he got kind of thrown into the fire, and he’s coming along and doing well. Alex Hale, first time ever as a kicker and was doing fantastic, would be another guy. This is a really good spring for us. I just want to stay healthy, practice hard and keep getting a lot of reps.”

“Well Tay is just now getting in shape. When he came in, he transferred in, we had COVID, we didn’t have structured workouts, we all struggled, the team struggled, guys that hadn’t been in this organization really struggled. Tay is in shape right now, in my opinion, for the first time since he arrived here. So, how good can he be? I don’t know because he’s never been in shape. He was pretty good in the bowl game, and he was out of shape. It’s difficult to get in shape during the season because we can’t push them expect one day a week when you’re getting ready to play. We can push them every day now, and we’ll push them hard in August for 18 days. I’m excited about him. If he’ll stay focused and compete, which he has, now that he’s in shape, he should make a lot of plays.”