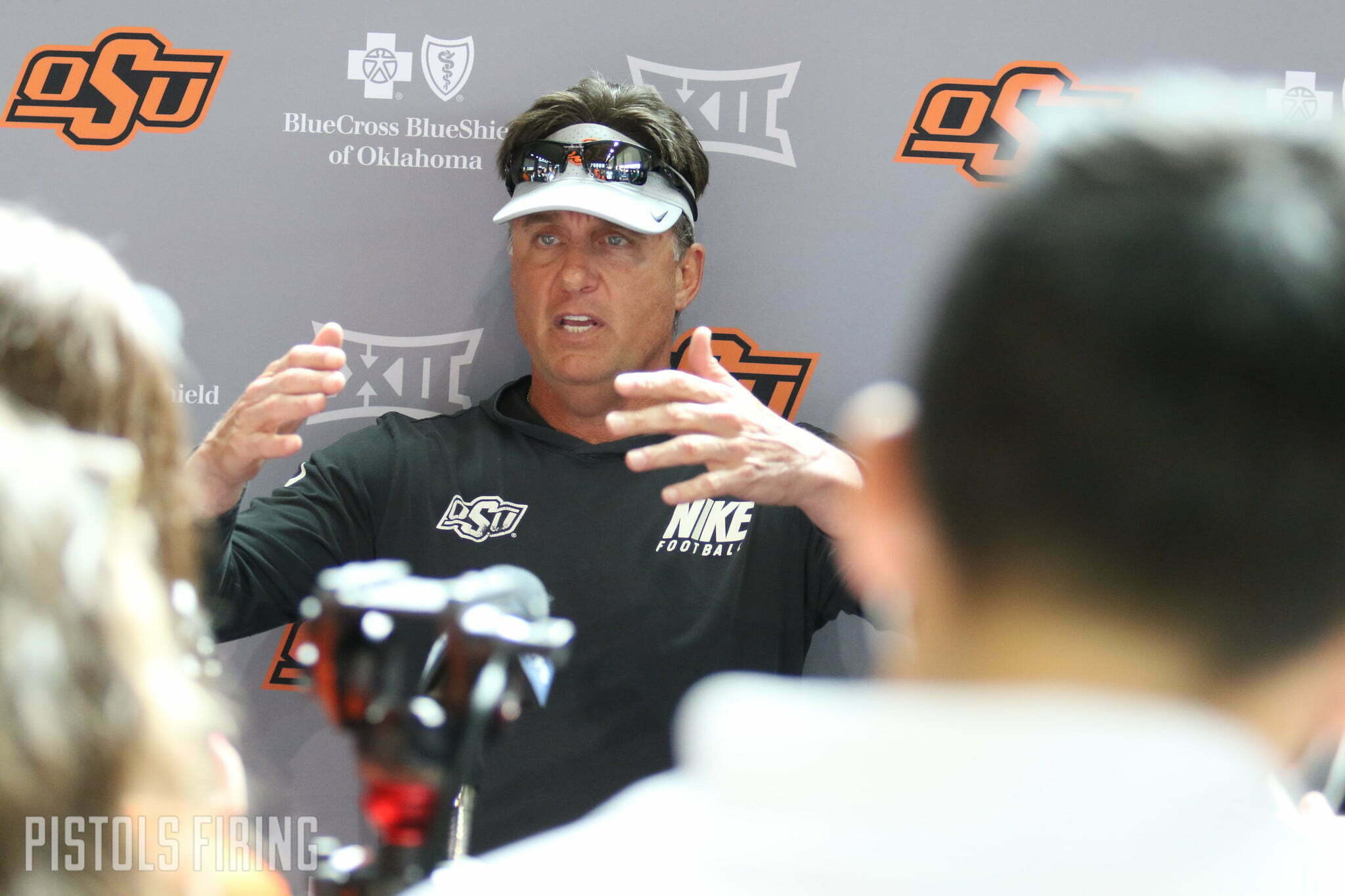 Oklahoma State coach Mike Gundy met with reporters before Monday’s practice to discuss how things were going. Here is what he said.

“Unfortunately we’re down to the last week. We’ll practice four times this week — today, Wednesday, Thursday night and Saturday will be our spring practice finale. It will be a big weekend for everybody. We’ve got football, we’ve got baseball, we’ve got softball — lot going on on campus, lot going on in the Stillwater community. So, we’re looking forward to a good week.”

On the spring finale format

“Just practice. We don’t have enough big guys up front to split up and have a game.

“Not really. Just everybody, they’re all getting good reps. The young guys are getting quality work. They’re practicing hard. I feel good about our concepts, our schemes. I feel good about our coaches. I feel good about the adjustments with Coach (Derek) Mason. The players are getting to know those guys. We’ve had a really good spring. I just wish we had about — well, I wish we had 12 linemen. Then we could go six on each side and play a game, but we just don’t have that luxury at this time to do that. To go out this Saturday and practice like we’re going to practice today will be more beneficial for the fans then to try split up and play some kind of game with players switching sidelines.”

“We will have 25 offensive linemen in August, so we’ll be just fine. We just don’t have them right now.”

“Well, they’re doing well. Most of these guys are first-year players now because we’ve got four starters that are in rehab right now, their recovery period. So, these guys are for the most part new, so they’re getting full-speed work, which is good in the fact that if they get thrown into the fire in August, they’ve had a lot of reps this spring.”

“So he’s been here already. He’s come a long ways in the last month and a half. He still has a ways to go. The summer will be important for him. The new rule they put into effect the last week that allows us to coach in the summer, different than we’ve ever had in college football before, will be a big piece for a guy like Caleb to develop him over the summer.”

On what analysts do in the spring

“They’re involved in everything we do — the book work, all the analytical side of it, the preparation for August practice, study video, write up reports on different parts of the game, how the game has changed in their opinion based on our schemes and the teams we are going to play. I think the best way to describe it is they do a lot of analytical work through the summer and give our guys information in preparation for August.”

“I think that’s a good question for Derek, I would hate to speak for him. I know that it’s an advantage for me as a head coach to have the analysts in place. I have three of them that I kind of call it the Denny’s club, guys that have been involved in the game for almost 50 years, that I visit with continuously throughout the year. I would guess that having Coach Gibbs, who’s coached at our level for 20-plus, been a head coach, been a coordinator, been a coordinator at a high level in college and been in the NFL a long time, I would think that would be advantageous for any coach.”

On his biggest takeaways from spring camp

“Well, we’ve got a good group of guys. We’ve got guys that work hard, guys that like to be around each other, want to compete, don’t have many issues. The guys took care of each other in the spring and competed, so it’s another step in keeping this organization running the way it’s been running the last 18 years.”

On adding Solomon Wright and Rylan McQuarters this spring, whose fathers played at OSU

“Anytime we can tie in former players who have relationships or kids that want to be a part of our organization, they get first shot at it. As we continue to hire former players and people that have ties to our organization it makes it stronger because they get it and they understand the culture and what we’ve done here for a long time.”

On his interactions with his offensive coordinator during the offseason

“We talk about kind of who we were during the season, what we think we are based on personnel for the upcoming season. They give me their opinion on what they think are the best things that we can do. I give them my opinion, and that’ll continue through spring ball. Then I’ll finalize that with them over the next couple weeks and make sure we’re all set up for summer training and what our goals and plans are for each phase as we move forward for August.

“I mean I have my opinion on some things, but I have a good feel for what they are doing. So if it’s gray, I let them make the decision, it’s their job, it’s their future, it’s their decision. We haven’t really had many issues with that, most of the time we’re on the same page.”

“Like (Kasey) Dunn has been with me 11 years, but only three as a coordinator. But he and I pretty much think a like. He knows what I want, basically. And I have a pretty good feel for what I’m going to get from his group, so there will be less time.”

On what Derek Mason is like off the field

“Very similar to what you see out here. He’s high energy. He’s got great people skills, players are attracted to him. His communication, in my opinion, with our staff has been excellent. He’s a very low-ego, low-maintenance coach, which means it’s easier for him to get along with his staff. We haven’t been able to spend as much time away from football based on he’s been really busy learning, and he’s going to be in transition with his family right now, but I look forward to getting to know him more over the next few months before we get started in August.”