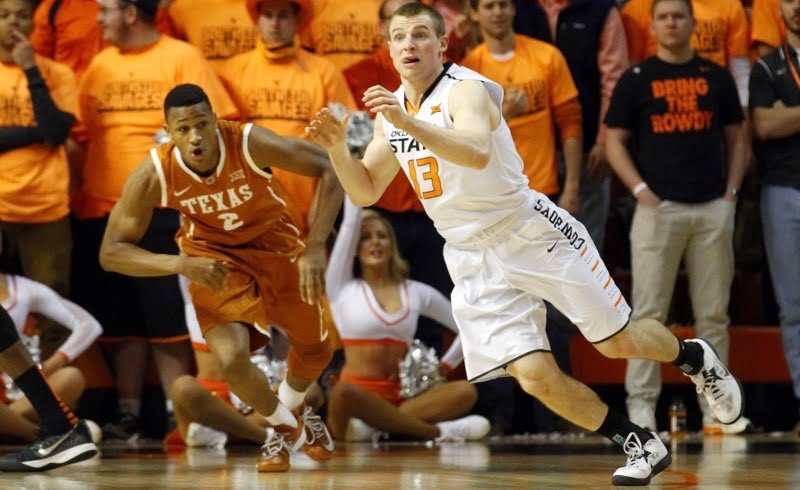 Phil Forte had a big game against Texas on Saturday. (USATSI)

On a night when Oklahoma State needed to announce just what kind of Big 12 team it was going to be this season it did that and more in a 69-58 win over No. 10 Texas.

After the teams drew to a 28-28 tie at halftime Le’Bryan Nash started red-hot (in a few ways) in the second half.

Nash scored OSU’s first eight points and picked up a technical after his fourth bucket in four possessions after getting semi-assaulted under the rim.

Travis Ford yanked him immediately (and sat him for about 40 seconds) but Phil Forte and Anthony Hickey took it from there.

Forte hit a 3 when the game was 39 all and the closest Texas would get the rest of the evening was 53-50. At that point Hickey tipped a shot in, hit Tavarius Shine for an open 3 and then hit Forte who pretty much ended things with a 3 of his own.

Hickey had an absurd 10-9-7-1-1 line with just one turnover and Forte hit 4/6 from 3 and had 20 points. Rick Barnes did not seem pleased with the defense Texas played on Forte in the second half.

Rick Barnes said Texas gave Phil Forte three shots in the second half that he calls "no-nos." Made up much of the margin. #OKState

I’m not sure if this is a no-no 3 but it was the type of shot Forte makes his scholarship on.

OSU’s big three (Nash, Forte and Hickey) had 50 of OSU’s 69 overall with Shine, Michael Cobbins and Jeff Newberry tossing in the other 19.

The Cowboys shot a season-high 53 percent from beyond the arc (including 66 percent in the second half!) — I’m not sure any Big 12 team should lose at home when it shoots 53 percent from three.

I was also impressed at how Ford’s squad went right after one of the best rebounding teams in the country tying their mark of 37 boards and holding them to 34 percent shooting with relentless defense, especially from the guards.

It was the type of win you have to have if you want to dance in March and OSU played like it knew that. Texas played like its football team usually does — absurdly talented, no clue what’s going on.

More notes and thoughts from Stillwater on Saturday.

• OSU was favored by two in Vegas and four on KenPom which I thought was pretty weird. I was obviously pretty wrong.

• Our floor is elite. I love it. It’s true that the oranges throughout (and generally throughout all OSU gear etc.) don’t match but from an aesthetic standpoint I think I only like Kansas’ better in the Big 12.

• How good was this pass and dunk from the first half? Shine can go. I’m all in on him.[1. WARNING: I was all in on Leyton Hammonds last year.]

• Do you think if Texas ripped Le’Bryan’s arm off his body and started clubbing Phil Forte with it that it would be called a foul or no?

• I shouldn’t admit this but I didn’t know Forte leads the Big 12 in scoring.

• One benefit of an emptier GIA is you hear all the crazies yelling their heads off. There’s one guy in particular who had some gems. In the first half: READ THE BOOK! to the refs. He dropped a NEVER AGAIN! on them in the second half.

• Why is Javan Felix pronounced “Fee-leaks”?

• Nash was really feeling it for stretches on Saturday. It might have been because Texas had a guy named “Connor” who was wearing two knee pads but he’s also just unstoppable at times.

• I love over-excited Forte who thinks he can hit 55-footers and drives on Cameron Ridleys. It’s really the best.

• We had a Cushing reference after the Forte 3 at the top of the page which was nice.

• The sequence with four minutes left where Hickey shot, missed and rebounded 16 different shots then dished to Shine for the 3 was awesome. Just quintessential Hickey.

• I have a crush on Myles Turner. That probably needs to be thrown out there.

• Tyree Griffin is a really good backup PG. I think that’s been a little bit understated so far this season. It’s really important too given that our backup PG plan last season was “whoever gets to the locker room first tonight!”

Forte will remember this game for a while pic.twitter.com/HUoDKqGPQm

• A thought I had multiple times tonight: “Texas is ranked No. 10?”

• This seems like a good thing for Oklahoma State.

RT @BDavisAAS: Longhorns about to lose their fourth straight in Stillwater. This despite tying a Big 12 record with 12 blocks.

• I was told tonight that Anthony Hickey hadn’t been to the foul line since Dec. 13th. Do what?

• Can we talk about Travis Ford for a second? This team shouldn’t be very good. It has a lackadaisical superstar senior, an overworked shooting guard and a transfer PG and Ford has pieced together a 12-3 record so far. I’m not going to crown him yet or anything but credit where credit is due.

• Nash with some athleticism here…

• I think Anthony Allen might get worse calls than Nash…

• How weird was that Griffin-Newberry-Shine-Solomon-Allen lineup? Would that five have started at TCU in either of the last two years?

• Could anyone reading this blog take Cameron Ridley? Does Steve Mocco read this blog?

• This was a great observation…

@pistolsguy @brendon_wm Jeff Newberry is everything that Brian Williams was suppose to be..

• The string of awkward Texas big men with gelled hair and a 3-point percentage higher than it should be is only paralleled by the number of defensive backs college football teams from Florida had named “Rolle.”

• I love this. Forte is going to be dropping 20-year-olds at the Y when he’s 55 with moves like this. He’s already perfected the old man game.

I live in Austin so this is me pretty much every time #okstate beats UT at something… pic.twitter.com/crpgEs0J2A

At Kansas on Tuesday.