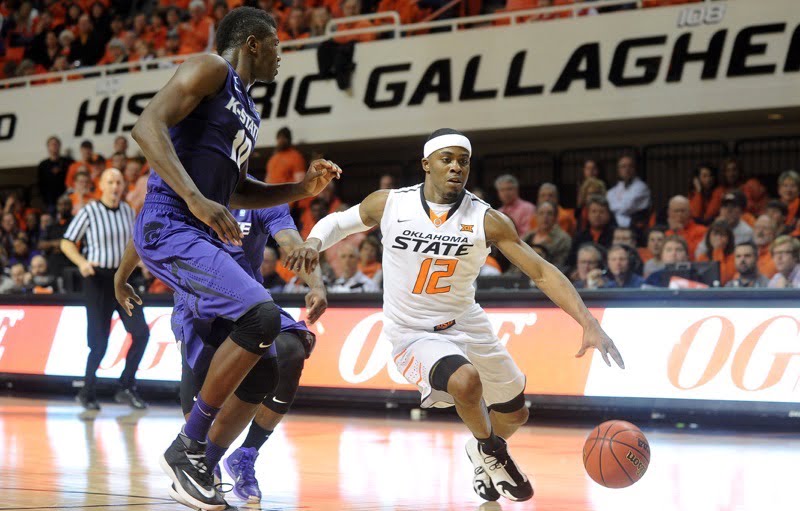 With Big 12 basketball upon us, Oklahoma State (11-2) hosted the Kansas State Wildcats (7-7) on Saturday morning at Gallagher-Iba Arena.

Despite a couple ugly losses to South Carolina and Maryland, this Cowboy squad had been great at times in non-conference play. Saturday was no different, as the Pokes showed signs of absolute bone-headedness…and then completely redeemed themselves with moments of excellence.

This game, a 61-47 win for the Cowboys, was defined by the difference between the first and second half. Travis Ford’s men trailed 29-27 at halftime, but used improved ball movement and a full-court press to completely change the complexion of the game.

Below are my five thoughts from this one, most of which note large differences between the first and second half.

Hickey ended the first half with 0 points, 1 assist, 1 rebound and 1 steal. While he was marginally involved in all categories outside of scoring, he really didn’t feel involved.

Fast forward to the second half, and Hickey lit up the Wildcats in a number of different ways. His speed gave Kansas State fits, as he scored 7 straight points for the Cowboys at one point. He finished with 10 points, 4 rebounds and 4 steals, all while looking like the best player on the floor in the 2nd half.

With Michael Cobbins in early foul trouble in the first half, Kansas State was able to establish a low post presence and beat the Cowboys at points in the paint. Despite leading scorer Marcus Foster being non-existent (he never showed up), the Wildcats were able to take a 29-27 lead into the half.

Oklahoma State came out and looked to the full-court press right away in the 2nd half. Hickey got his hands on a few steals, while Nash came alive defensively and ended up blocking 4 shots.

All in all, the Cowboys used renewed intensity to win the 2nd half 34-18.

Phil Forte actually started the hot, scoring 11 points in the first 10 minutes of the game. The entire Cowboys squad then went extremely cold, failing to score a single bucket for 5 minutes of the latter part of the first half. Forte would end the half with 11.

The second half featured 20 full minutes of Forte, as he hit his patented jump shots, but also made a concerted effort to get points at the bucket. He scored 20 points in the game on 8/13 shooting, a great day for the junior.

Coming into the game averaging 2.7 points per game, Tavarius Shine dropped 8 in the early moments of the first half. He didn’t go on to score again, but he shot 3/5 and chipped in a couple rebounds, as well.

May have just earned himself a few more minutes moving forward. We’ll see.

While the first half was forgettable, the Cowboys that showed up after halftime were a lot of fun to watch. Kansas State is far from the most formidable opponent we’ll run into in Big 12 play, but starting 1-0 was the goal and it was accomplished.

The next four games will be against ranked opponents, as the Cowboys go on the road to face Iowa State, come home to face Texas, and then get both Kansas and Oklahoma on the road.

Things are looking good at 11-2, but we’ll learn who this Cowboy team really is in the next four contests.