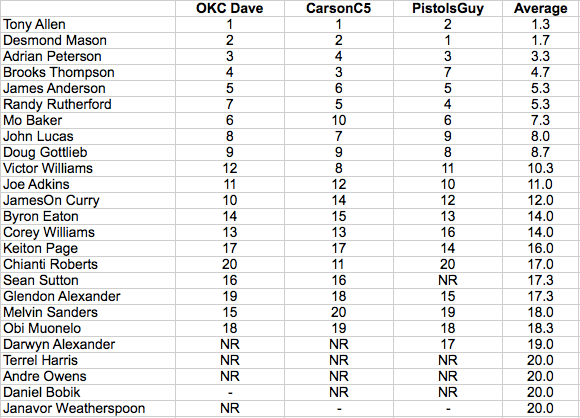 So if you’ve been following PFB at all this week, you’ve noticed that we took a stab at ranking the top 20 guards of the Sutton/Ford era. Since those rankings were in four separate posts (16-20, 11-15, 6-10, and 1-5 in case you wanted to take a peek), I wanted to aggregate them here along with a few of our thoughts on the process…

We underestimated the early to mid 90s guys because we don’t remember them as well. Peterson averaged 11, 14, 17, and 17 in his four years at OSU. Do you know what we would do for a guy who stayed four years and did that these days? Build him statues and sacrifice student managers in his name.

We all overrate Desmond, we can’t help it.

Players we didn’t know what to do with: Keiton, Chianti, Eaton, and Adkins.

How did the starting PG on one of our two Final Four teams not make this list?

JamesOn could have been top 5-6 with a monster senior season.

We need to do this more often.