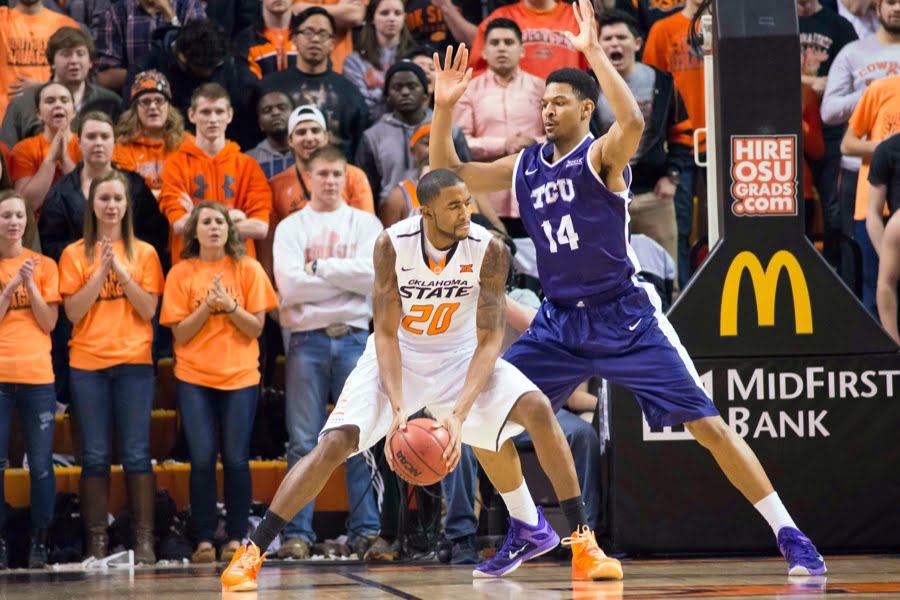 OSU played the first 10 minutes on Wednesday night like it didn’t want Senior Night to be its last game in GIA this season.[1. If you don’t get the reference, ask a friend.]

Thankfully, it played the next 30 like it meant business and ran away with a 82 to 70 win over TCU on a strange, cold night in Stillwater.

It was a pretty boring game for various reasons.

First, TCU was involved. Second, OSU started 1/12 from the field. Third, OSU (probably) punched its ticket in a five minute stretch to begin the second half in which it outscored TCU 18-3 to put the game and losing streak away.

After that I followed Russell Westbrook’s night on Twitter.

Phil Forte got back to doing Phil Forte things with 13 points on 2/6 shooting from 3.

One thing I still noticed with Forte, though, is that he won’t quit trying to draw fouls at the rim despite a clear unwillingness from refs to give him that call.

As I asked after the Texas Tech game, why not go to the floater more often?

Anthony Hickey was also a beast in the second half and finished with 20 points and five assists and didn’t miss a shot from behind the arc.

Travis Ford (or an assistant or grad assistant or maybe a family member) clearly reads Pistols Firing because OSU took a ton of 3-pointers and hit most of them (11/17 from beyond the arc). He also benched Forte (I’m ignoring the fact that it was Senior Night).

So now, barring some shenanigans on Selection Sunday, Oklahoma State will head to its third straight NCAA Tournament with, at worst, an 8-10 record in the Big 12 Conference.

It will play at WVU and in the first round of the Big 12 Tournament for the rights to not play a No. 1 or No. 2 seed if it wins its first game in the dance.

This season offers up a lot of “what ifs” but the reality of Wednesday night is that OSU won a game it had to with its NCAA Tournament bid on the line and it did so with ease.

That doesn’t mean this is a great or good team but it does mean that it will be dancing for the third straight March. Maybe that’s not enough for some long-term (and we can chat about this later) but for this season, it’s good enough.

• The worst part about OSU’s start — it was 1/12 from the field to start the game — is that it probably wasn’t even its worst start in the last week.

• Is it just me, or does Nash set abysmal screens? They’re either moving (and thus fouls) or not effective whatsoever. It’s not like he’s skinny and short, either.

• Have I been watching too much Oklahoma State basketball or does Anthony Hickey shoot more “was it a 2 or a 3” shots than anyone in recent memory?

• This made me laugh for some reason.

• I have no thoughts on the Marek Soucek banked 3-pointer. It speaks for itself.

• “Travis Ford needs to put his NBA hat on” was a thing that was said by the ESPNU announcing crew during the broadcast tonight.

• We consider Golden Corral “seafood”? Is that a real thing?

• Can you imagine the blood?

To the kid with the “we want Kentucky” sign. No, no we don’t.

• It was important to get Forte going in this game if only so he can be rolling into the WVU and Big 12 game. You aren’t winning either of those without Forte cranking out a good game.

• It’s weird that 150 seconds at the beginning of the second half of a game nobody watched is what ultimately got OSU into the NCAA Tournament.

• Are TCU’s unis made of satin or is that just me?

• Here was the best moment of the night.

• Where was Jeff Newberry? Was he getting his fade touched up during the second half?

• This goes without saying but TCU is not very good. Losing to them in Ft. Worth is probably worse in retrospect than I thought it was at the time.

• I’ve been so tainted by Desmond and Markel when it comes to dunks in GIA. I see Cobbins do a fake pass, crossover lefty jam and I’m like “eh, Markel did that with his eyes closed.”

I feel bad about it…sort of.

Jeffrey Carroll has shown the past two games he is a key rotational piece.

• The Forte floater is amazing. Why doesn’t he do that more often instead of trying to draw fouls he clearly isn’t getting?

• Forte is probably going to finish with more points in his career than Desmond Mason and Bob Kurland. How do we feel about that?

• This is what every coach from a team’s conference says.

Trent Johnson on #OKState: "This team is not a bubble team. Let's not kid ourselves."

• I’ve been waiting for him to have a good game to get the “Heat Czech” shirts printed.[1. Copyright Nolan Cox.]

Waited 4 full years to make a "Heat Czech" comment then recorded the first half and missed it. Either way, pumped for @marasoucek. Congrats!

• I thought Tavarius Shine was terrific tonight. You can just tell he understands what to do. I’m not sure I can even explain it. He’s not super talented or overly athletic but he just does work. I’m excited about his future.

• Did Cobbins’ parents rush the court?

Next game: In Morgantown on Saturday. Beat the Fightin’ Track Suits!