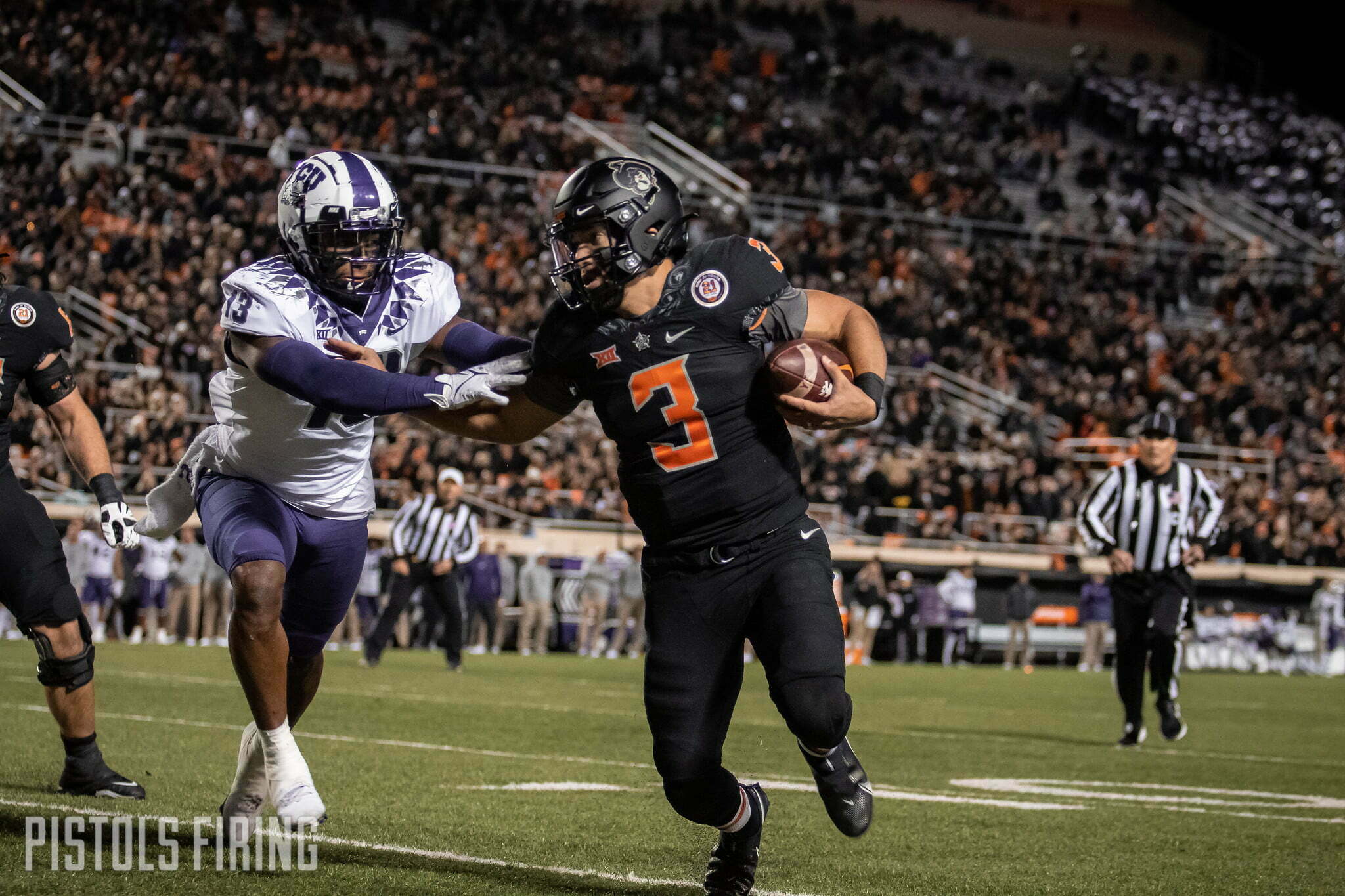 Oklahoma State is on the road this weekend for a Top 15 tilt with TCU. Two unbeaten Big 12 teams will enter; one will leave. The team that comes out with the W will head into late October as the frontrunner in the Big 12 title race.

If the Cowboys would like to make the trip back from Fort Worth in the Big 12’s driver’s seat, they’ll need to have a good answer for these three questions.

Can OSU Slow Down TCU’s Offense?

The faces may look familiar, but this is not the same TCU team that Oklahoma State thumped 63-17 last season. Armed with Sonny Dyke’s new offense, the Horned Frogs have gone from averaging 28.7 points per game last year to leading the Big 12 at 46.4 through five games. And they’re doing it with pretty much the same key contributors.

The Cowboys’ defense has its own holdovers from a dominant unit last season but turnover in the back end has left OSU suspectable to giving up big plays. The Cowboys are ninth in the league (ahead of only Oklahoma’s defense) in plays allowed of 10 yards or more. Last season, OSU ranked second in the Big 12 in that department.

Who Can Play from Behind?

The Cowboys have gotten off to great starts so far this season. Last week’s comeback win over Texas Tech represented the first time OSU trailed at halftime all year. But the Horned Frogs have been even better at staying ahead.

TCU trailed for all of 1:07 of game time during the third quarter in the win over Kansas last week. It was the Horned Frogs’ first deficit since their season opener against Colorado. They’ve trailed for a total of 16:31 in five 60-minute games.

Falling behind by a 10 in the first half isn’t a death sentence for either of these teams. Each boasts a high-powered offense capable of staging a comeback. But any ground lost puts that much more pressure on a defense to limit those momentum-swinging big plays (as mentioned above) and to be able to get off the field on third downs.

The Pokes have picked up where they left off last year when it comes to getting off the field on third down. OSU has led the conference in third-down defense going on three years. That skill will be paramount to the Cowboys coming home with a road win on Saturday.

Duggan and TCU are currently converting third downs at a clip of 49.2 percent, which is good for third in the league. It makes them the best third-down offense the Cowboys have faced thus far in 2022.

A Note on Fourth Downs

A key to success on third downs is having some notion of what an offense will do on fourth down. Depending on how you look at it, the Cowboys should get a break on that front this week.

After facing Baylor and Texas Tech — the Big 12’s two most aggressive fourth-down teams — the Pokes should be able to employ a more traditional strategy on the third down.