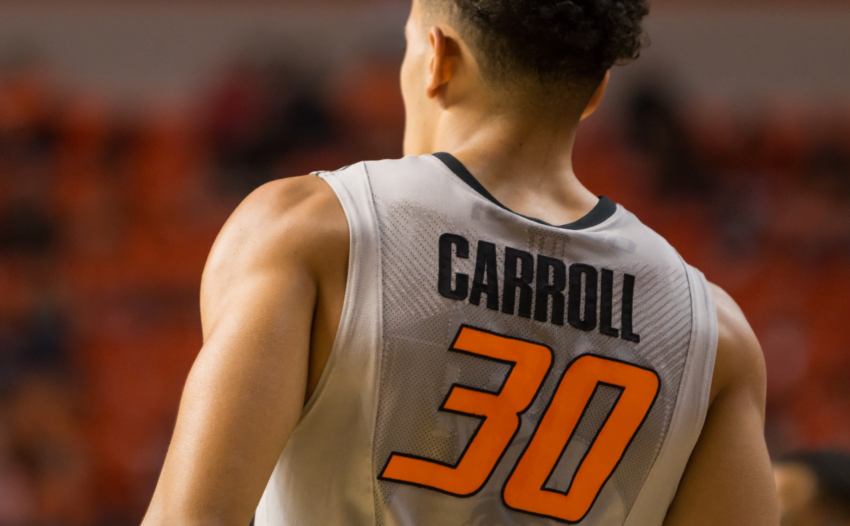 We’re fully into Cowboy basketball and cold winter nights at Gallagher-Iba. Here are three things to chew on this week.

1. Every Day Guys Get Better

Call it maturing, call it turning over a new leaf, call it what you want but these teams are outmanned most nights and finding ways to stick around. Whether it’s been riding Jawun like Seabiscuit in the non-con, Carroll emerging as a viable third banana or forming a new identity as a team that owns the offensive glass and turns you over, there’s now an identity and a direction to build on.

Jeffrey Carroll now has seven 20-point games out of the 17 #okstate has played. His career highs coming into the season was 18.

There’s plenty of evidence to draw from but Exhibit A is Jeff Carroll. Undeniably Carroll is one of the most improved players in the Big 12 moving from 8.2 points/game and 33 percent from three to 16.8 points per game and 43 percent from deep.

Solomon drilled KU inside (collect your winnings if you saw that coming) and Davon Dillard played functional minutes against serious competition. Having a basketball coach who has a plan and a capability to develop anyone not named Markel Brown is something we’ve sincerely missed.

Now, my question is this: How do they trend over the course of a season? Eddie’s teams were got better and better until you had a different team in March than you did playing rum-dums in November. And I think that’s what I’m most excited to see, how do Underwood teams trend.

If I told you on Friday Solomon would take over deep in the second half in the Phog, you would reasonably respond:

And reasonably so. But what’s not laughable is what he could provide to the team.

Already one of the top offensive rebounders in the country (rebounding 17 percent of OSU’s missed shots, No. 9 in the country), there were a couple developments on Saturday: his pick-and-roll rim running with Jawun and continued development at rim protecting.

Mark Cooper of the Tulsa World pointed out that Solomon has scored in double digits only three times in his three years in Stillwater, so we’ve got a ways to go for him to be a consistent offensive threat but spatial awareness and improving hands are wonderful sights for a team lacking star power inside.

He rocked a smaller Iowa State team inside to the tune of four blocks and had a monster swat in Lawrence for a team scrapping to stay in it, so let’s see how that trend plays out.

The flaws are apparent (foul trouble, general awkwardness at times) but if he can continue evolving as Jawun’s pick and roll mate and stay in the game late we could have something here. Legit post players only come around once in a while and a 6’9″, 250-pound Jayhawk killer is warmly welcomed in these parts.

3. Find Our Place in the World

The schedule was tough last week (KenPom Nos. 7 and 23) but now the Pokes will get a shot to pick on someone their own size with Ken Pom No. 31 K-State coming to Stillwater and traveling to No. 34 Texas Tech. The top shelf in the conference with West Virginia and Kansas are viable number one seeds, Baylor and Iowa State will chase them, then there’s the rest of us.

Playing a continually improving Texas Tech team and a feisty K-State team are winnable games that will continue to unveil the ceiling for this squad.

Wednesday Night in Stillwater against the Kansas State Wildcats (8 p.m. on ESNPU): Coach Underwood takes on his alma mater for the first time.

Saturday Afternoon in Lubbock against the Texas Tech Red Raiders (1 p.m. on ESPNU): Tubby left the cupboard full of seasoned upperclassmen before he split for Memphis.