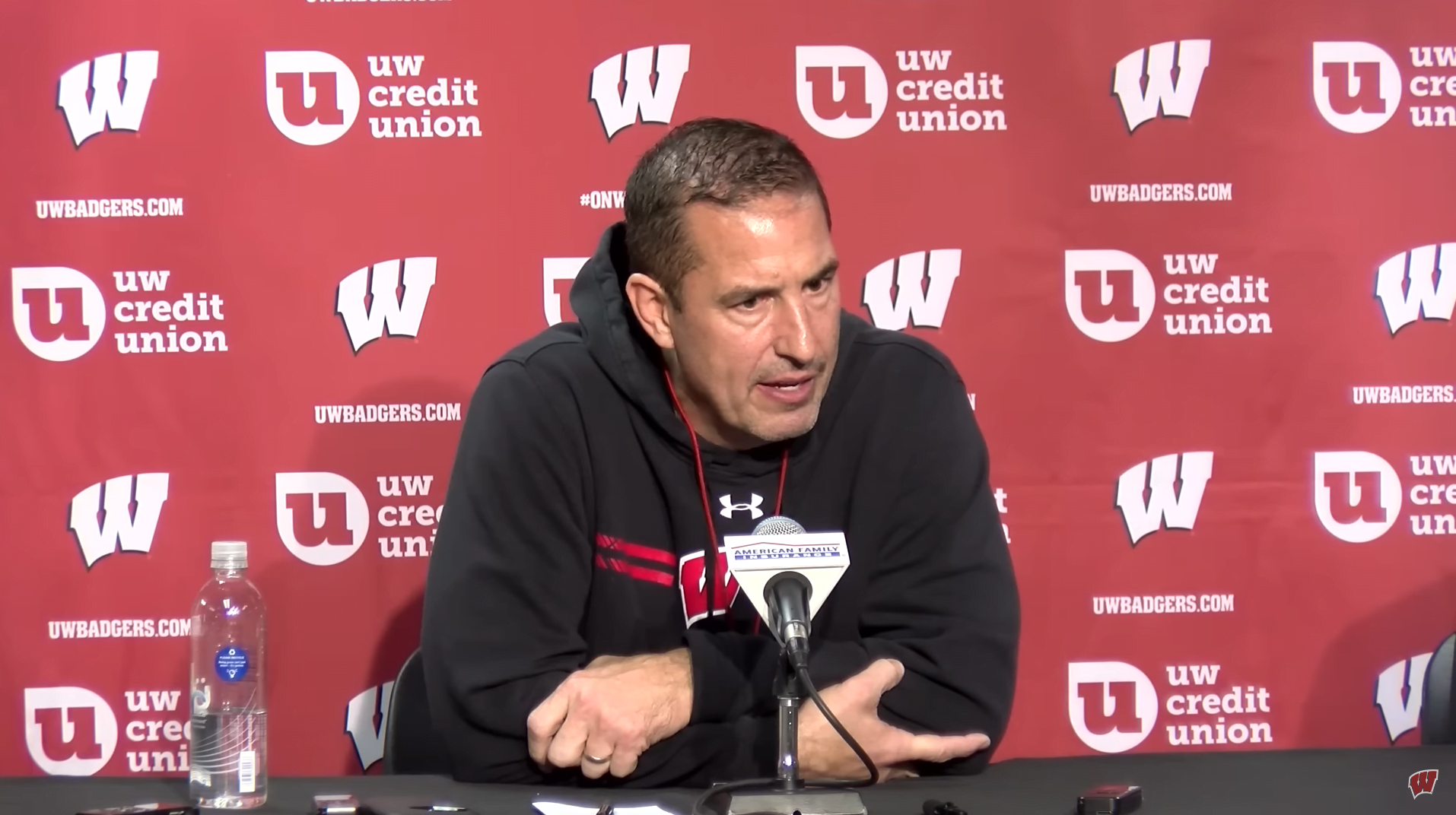 If you thought there was a whirlwind spinning up in Stillwater, imagine going through a wild portal season combined with bowl prep while also going through a head coaching change. That’s what they’ve been dealing with in Madison.

Less than a week before the Badgers found out they would be playing the Cowboys in the Guaranteed Rate Bowl, they learned that former Cincinnati coach Luke Fickell would be taking the reins from interim Jim Leonhard, who had taken over after Paul Chryst was fired earlier this fall. Fickell won’t make the leap with Cincy to the Big 12, but he’ll get a little taste of the league in bowl season.

On Tuesday, Fickell held his second media availability since being announced as the UW head coach, and in this one, he tipped his hand a bit about how the transition was going and how the Badgers will prepare for OSU.

1. Fickell to Be More of a Figurehead

Fickell was asked about his specific role and which positions he might be coaching as the Badgers prepare for Oklahoma State. He said he’s taking a bit of a hands-off role for the sake of continuity with the current staff as well as consistency among the players.

Leonhard will remain throughout the bowl game and will, apparently, continue to run the team as he has been while meeting regularly with Fickell to collaborate on a bigger-picture plan.

“Right now I’m just being the figurehead and being the head coach and trying to keep tempo going and things like that,” said Fickell. “Jim [Leonhard] is doing a phenomenal job and he’s obviously comfortable in running the defense.”

“… I’m not really coaching a position. Kinda trying to stay out of the way as much as possible and just trying to manage the flow of things as much as I possibly can, and building relationships.”

2. He’s Still Trying to Figure Out Who He Has

Wisconsin is not immune to the portal bug after having lost its three-year starting quarterback Graham Mertz, as well as a handful of other depth pieces to transfer. The Badgers have also had six players declare for the NFL Draft, and they are impactful ones at that in All-American linebacker Nick Herbig, all-conference nose tackle Keeanu Benton, starting center Joe Tippman and starting cornerbacks Justin Clark and Jay Shaw.

Just two weeks in, but also two weeks away from this first game as the Badgers’ coach, Fickell has his work cut out for him.

(See, he wouldn’t have been welcome in the Big 12 anyway.)

“We’ll start to figure that out and then by next Wednesday we want to have in place how we’re gonna look. Not just at the quarterback position. What are we going to look like upfront at offensive line? What’s the best mix for what we want to do, put a plan in place and run with it.”

Like OSU, Wisconsin’s starting quarterback has hit the portal and its bowl hopes will fall on inexperienced shoulders. Freshman Myles Burkett and senior Chase Wolf are the only other UW quarterbacks that saw the field this season, and they combined for 11 total pass attempts in 2022. So, the Badgers are even shorter on QB experience than the Cowboys are.

And in keeping with his hands-off role, Fickell will leave that tough decision to the existing staff, but says he’ll add input if asked.

“I don’t know that we’ve made a decision on that yet,” said Fickell. “That won’t be my decision. Let’s be honest with you. That’s kind of what I’m talking about, about being the head coach. I’ve got the utmost respect for what these guys know and what gives us the best chance to win. I’d just like to sit down with them and if they have any questions, things that I might see, they can ask. But the reality is it’s going to be what they believe is best.”

The Cowboys and Badgers square off in the Guaranteed Rate Bowl Tuesday, Dec. 27 at 9:15 p.m. CST on ESPN.