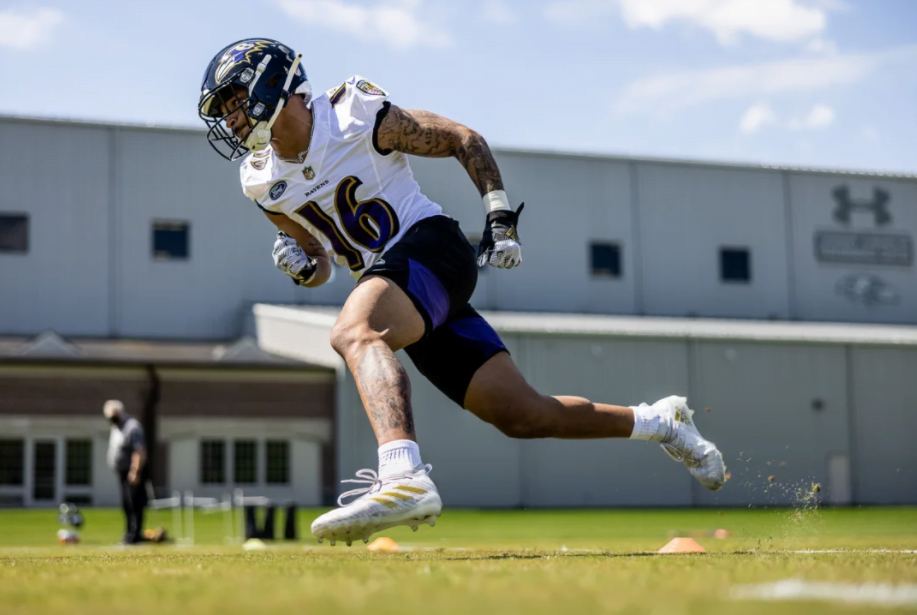 Tylan Wallace is a former Biletnikoff finalist who later came back from a season-ending knee injury to lead the Big 12 in receiving yards. So, when he slid to the fourth round — and into the Baltimore Ravens’ lap — he instantly became a draft steal candidate.

Wallace took part in the Ravens’ Rookie Minicamp last weekend and quickly endeared himself to those fans, and began adding to his sleeper mystique.

We all like comps, and Baltimore fans are looking for someone to measure their newest receiver against. For many of them, that comparison is none other than former All-Pro wideout Steve Smith Sr., who spent his final three seasons with the Ravens.

From the surface, it’s not entirely a stretch. Smith was an undersized wideout at 5-foot-9 that didn’t play like it. Tylan is bigger at 5-foot-11, but he also outplays his measurables. Whether his career lives up to that of the five-time Pro Bowler, Wallace is just happy to be mentioned with Smith who was a bit of a steal himself, going 74th overall back in 2001.

“I’ve actually never met Steve [Smith Sr.],” Wallace said told BaltimoreRavens.com. “It means the most to me to be compared to a receiver like that with that caliber. I’d love to meet him and obviously get to know him a little bit, talk some ball and everything like that. Like I was saying, for me, I think I need to take a few more steps before I can really appreciate that comparison.”

Wallace will not only have to adjust to the speed and size of the NFL, he’ll also have to adapt to playing in a completely different style of offense, and at a new position.

Tylan said that he’s making the move from the Z position he played in college to the slot for the Ravens. And he’ll be playing in one of the most run-heavy offenses the NFL has seen in years, led by a QB who commands the ball more than most.

“I haven’t met Lamar [Jackson] yet – I’m looking forward to that, for sure,” Wallace said. “I think the biggest thing, at least for me, is the different way they run offense in the NFL. Obviously, I come from Oklahoma State. We were a big tempo team, one word and go. So, it’s definitely different from getting in a huddle, hearing the play called and getting out there. I’m definitely excited to get in here and learn. The first day wasn’t too bad. It went pretty good, but I definitely have a lot of learning to do.”

Minicamp wrapped up May 16 but Wallace and his fellow rookies will have a quick turnaround. OTA offseason workouts commence May 25, and he’ll be active with the team just about every week up until mandatory minicamp kicks off June 15.