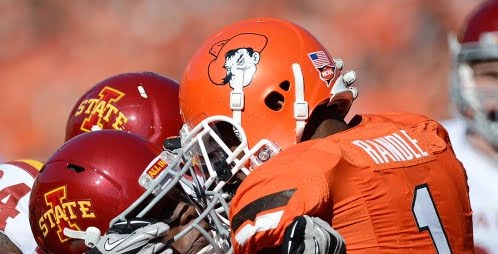 Porter: Okay guys, we just experienced a great rivalry week with Bedlam on tap so let’s talk about the best uni rivalry matchups. What are the best ones?

Southwell: It’s Michigan vs. Ohio State because of the two iconic helmets. They play at the end of the year and Ohio State’s helmets are covered in Buckeye stickers.

I like this matchup more when Michigan is the home team because I think Ohio State looks best wearing Silver-White-Silver. 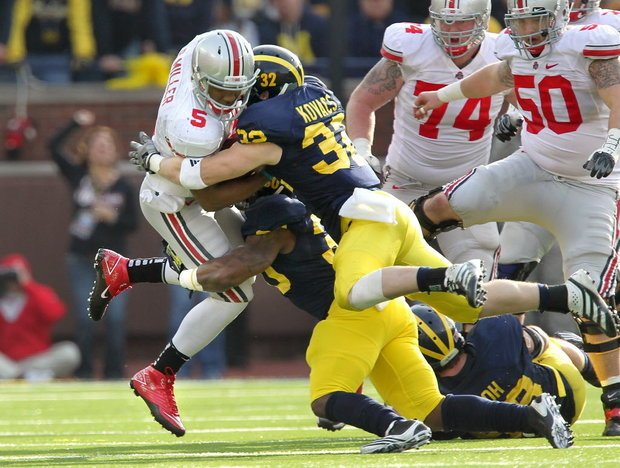 Don’t get me wrong, I’m all for the color vs color rivalries, but USC does nothing for me. 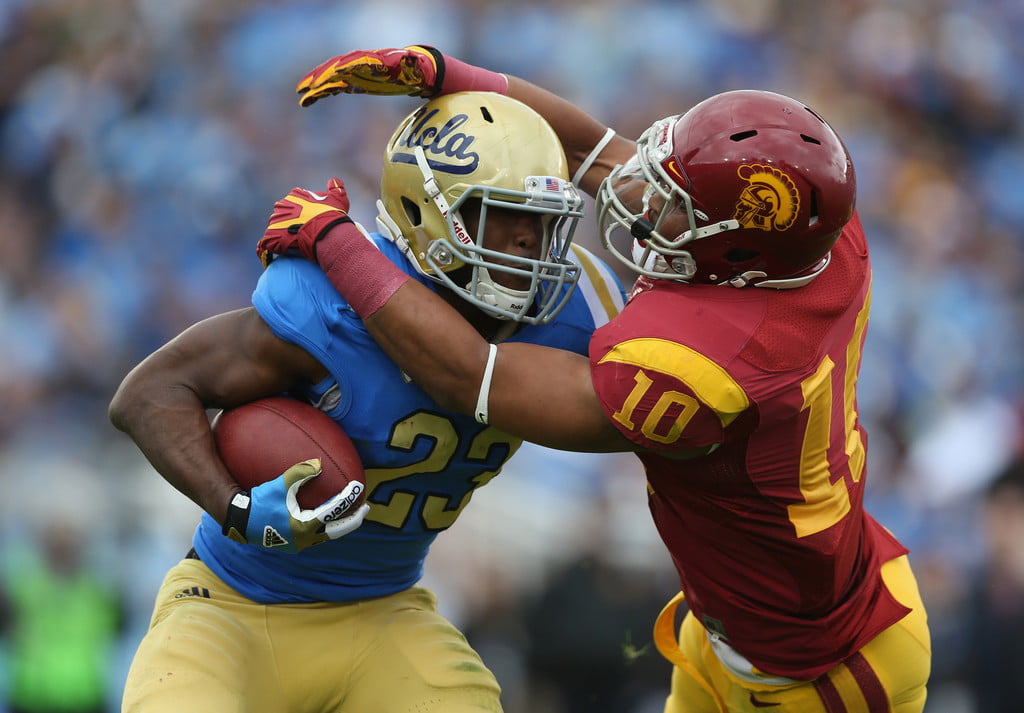 If Oregon vs. Oregon State 2013 became a regular thing… 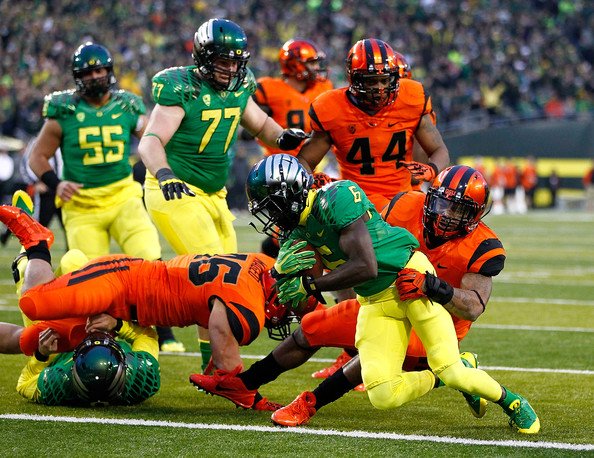 Cunningham: Florida doesn’t always wear orange pants, but when they do, their uniform reaches elite levels. 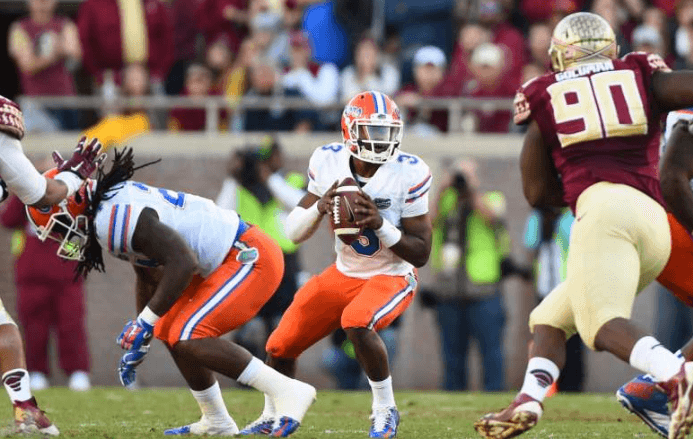 As for the color vs. color match-up, it clearly takes rivalry games to the next level. (ALL rivalries should do this, if the colors are distinctly different)

Oregon vs. Oregon State is the perfect game for this era of uniforms.

My Dad on #Oregon's uniforms: "I would be embarrassed to put that on and go out in public." Fair to say House Cunningham is firmly divided.

As for the best, I have USC-UCLA, sorry Justin. USC’s uniforms are among my favorites. It’s a traditional, powerful look. They are one of the few schools who don’t need new uniforms, they just need a few more Reggie Bushes these days. 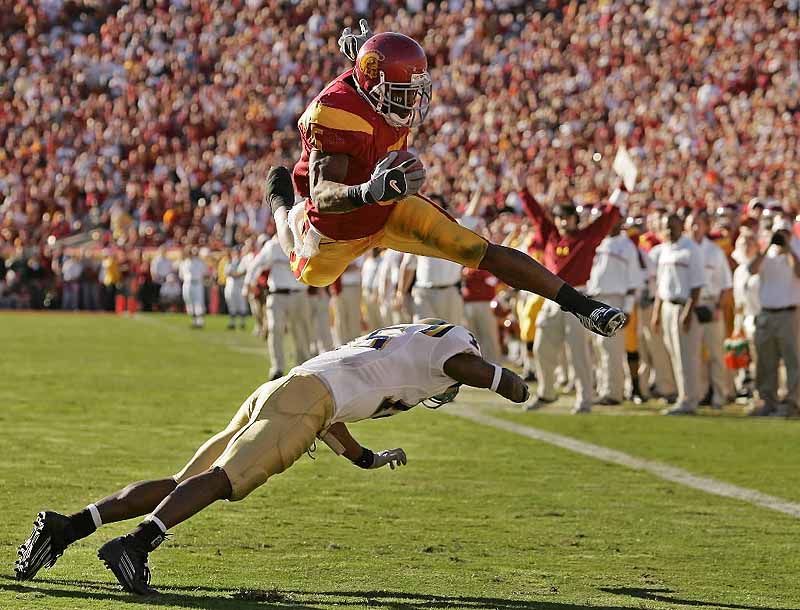 While Adidas does their very best to ruin this match-up with UCLA’s uni’s, the baby blue is too good to squander. 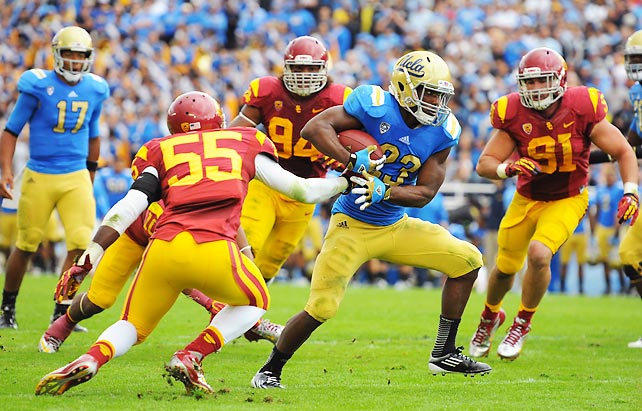 We’ve mentioned a hundred times color vs. color would make every rivalry better. What are your dream color-color rivalry games? Justin mentioned Michigan-Ohio State — if they tried it, that’s the zenith. I would love to see Bedlam try it, but Gundy will do what’s best for his team. 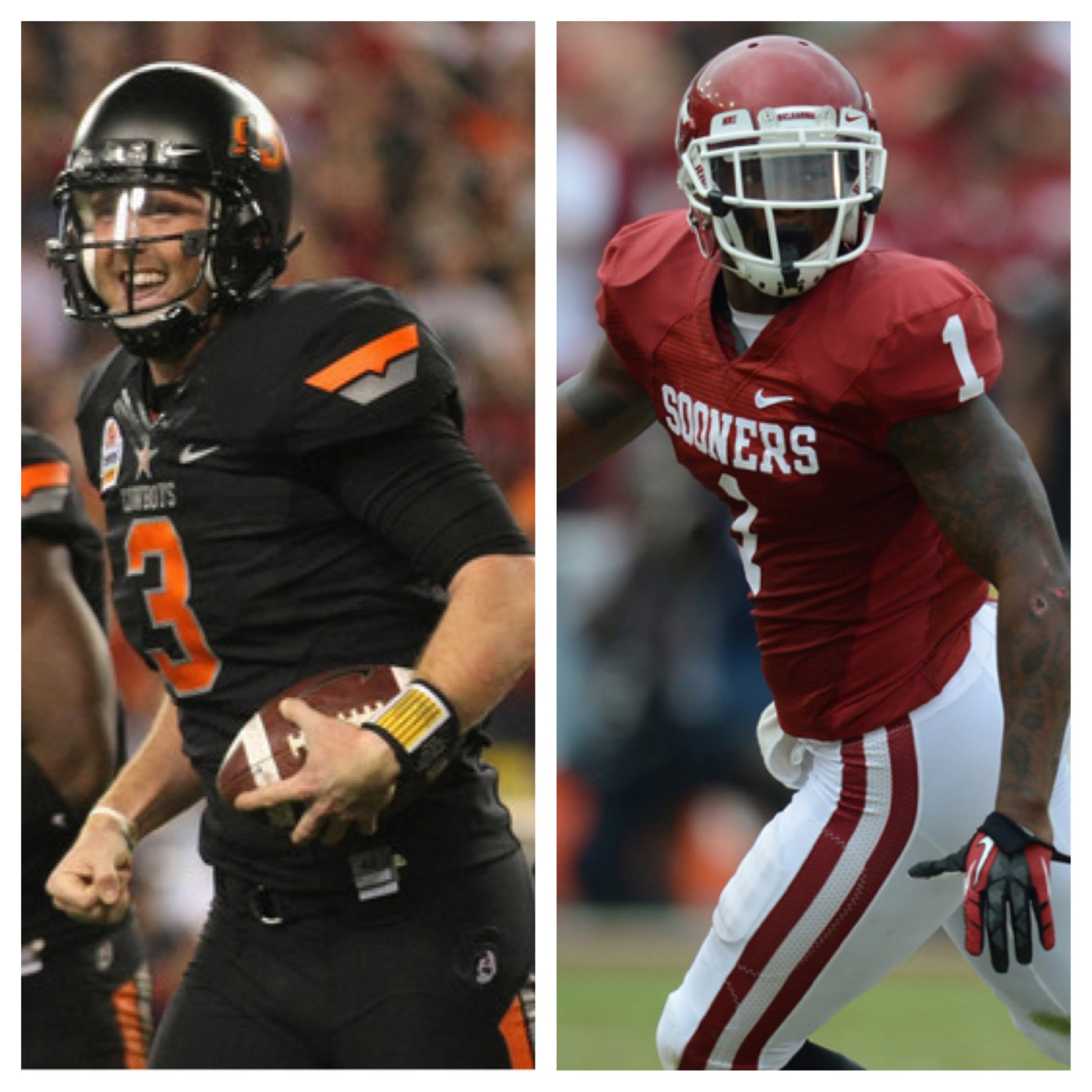 Southwell: Michigan vs Ohio State would be amazing. Auburn vs Alabama would be great. Army vs Navy would be tough with navy against black.

Bedlam has so much potential. Gundy knows all black is what’s best for the team, and that’s just not going to happen vs OU.

Porter: Harvard-Yale would be a tremendous all color game. So would Cal-Stanford and Texas-Texas A&M if they ever played again and as long as they didn’t monochrome it out (that would be really silly).

Alabama-Penn State, while not really rivals (or are they?) would be a terrific color-color matchup. Michigan State-Ohio State, too. I hate to cede this to two schools in our conference but Baylor-TCU green-on-purple would be good as well.

As for the rivalry uni matchups Michigan-Ohio State is the obvious goat (no matter where it’s played) and USC-Notre Dame goes a lot harder in the uni dept. than it does on the actual field although I prefer the South Bend version. 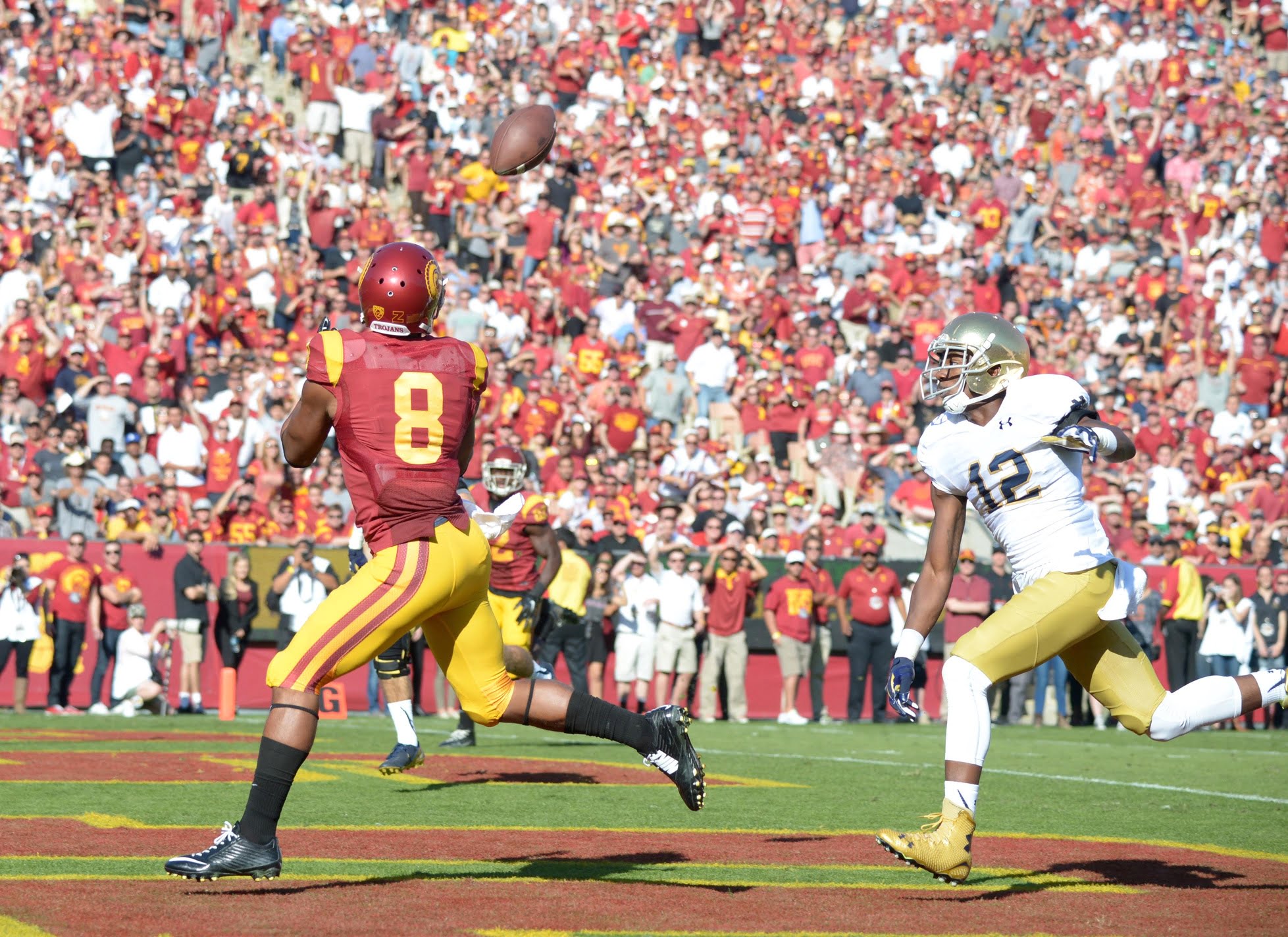 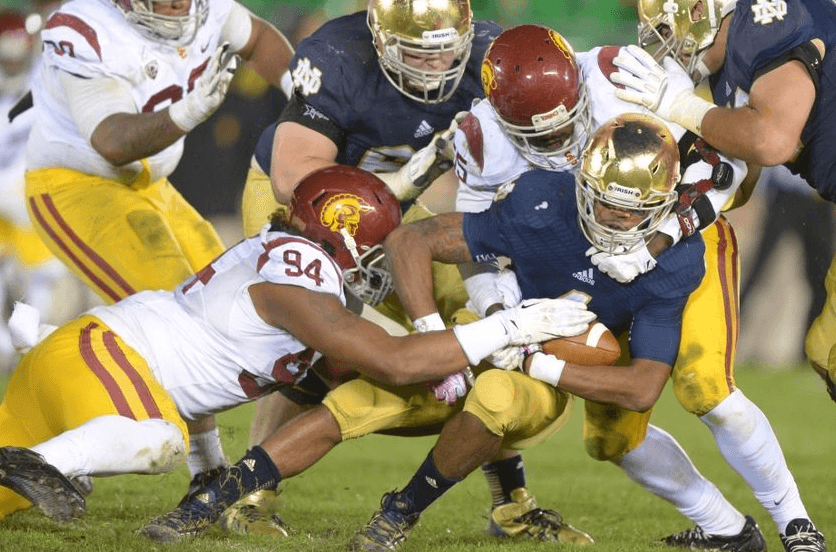 I think Florida-Georgia is really, really good too though strangely I prefer this version (Florida alternates) to the all-color ones. I also wish the helmet colors didn’t clash so much. 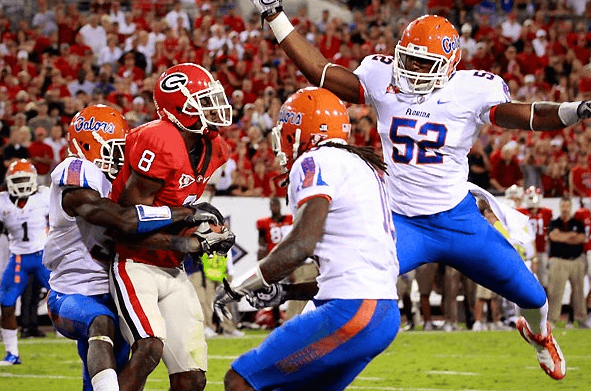 Southwell: I didn’t realize there were so many orange-ish vs. maroon-ish rivalries.

As much as I would like to see a color vs. color Bedlam, I don’t want to see OU wear their home threads at Boone Pickens Stadium. It will probably never happen.

Cunningham: Speaking of maroon, we need to talk about Mississippi State.

We can talk about how amazing Oregon is every week (I would, they are) but who has the worst uniforms in the country?

I think I can say confidently it is Mississippi state. Did you see the monstrosities they wore against Ole Miss? Coupled with Hotty Toddy’s classic uniforms, this was a mismatch. 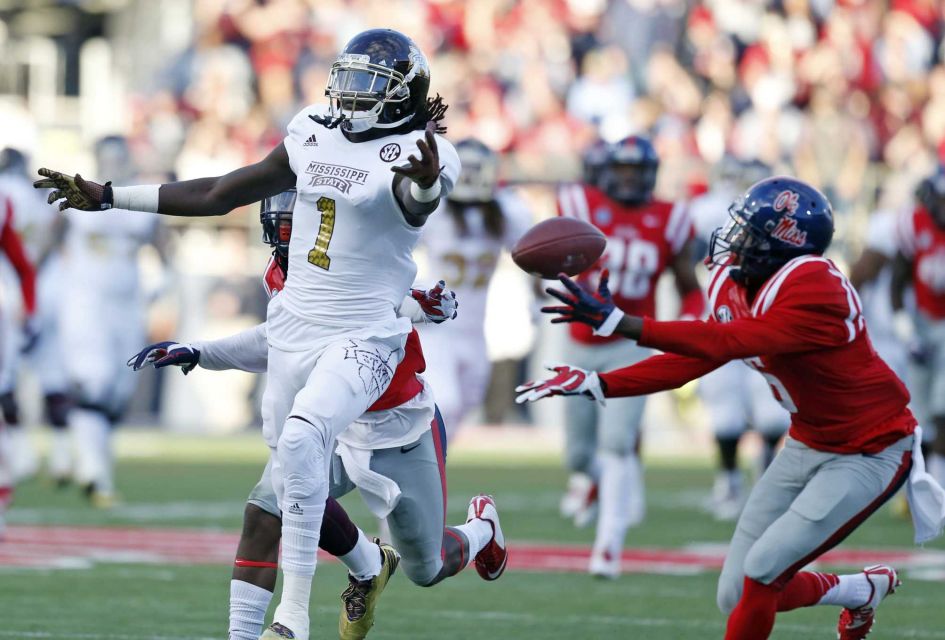 I get it — the Egg Bowl trophy is gold but the little state’s of Mississippi on the numbers was just terrible. 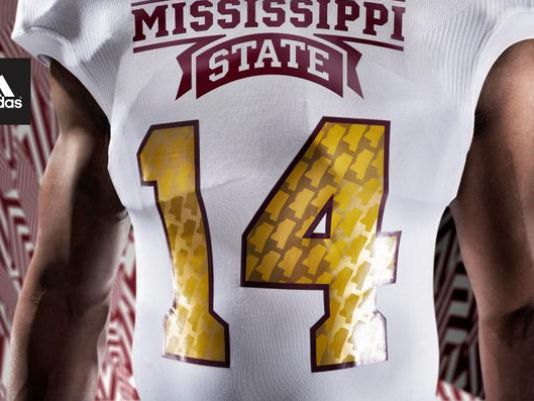 Who do you guys think has the worst uniforms?

Porter: That’s a great question. I don’t really understand what South Carolina is doing. I just hate everything about these. 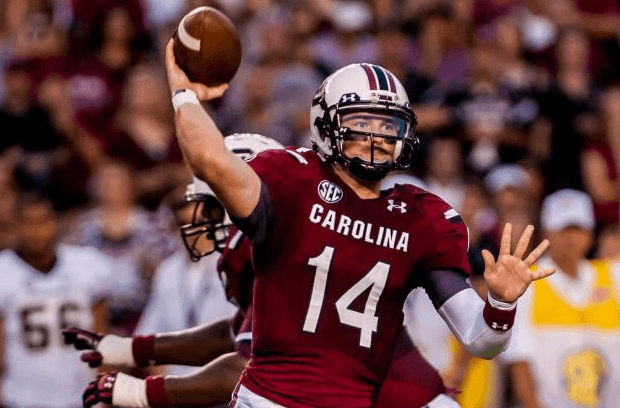 Also is there a bigger disparity between basketball and football uniform than Kansas? Their basketball unis are world-class and then they do this for football! 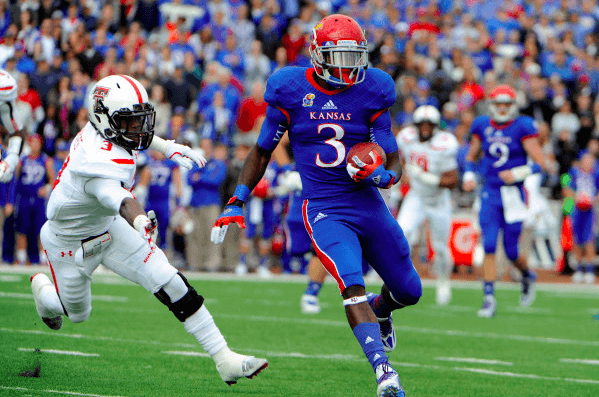 Purdue is egregious, too. It’s like Nike said “what is the exact opposite of Oregon we will do that for Purdue!” 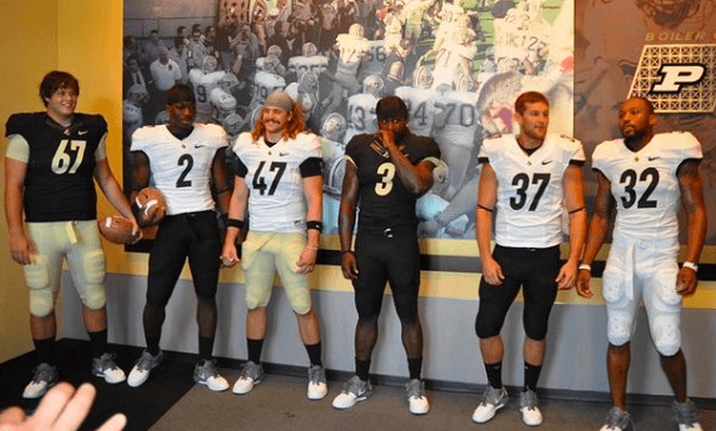 Southwell: I’ll start by saying I feel bad for Wyoming. They can’t do anything with brown and yellow and it isn’t their fault. 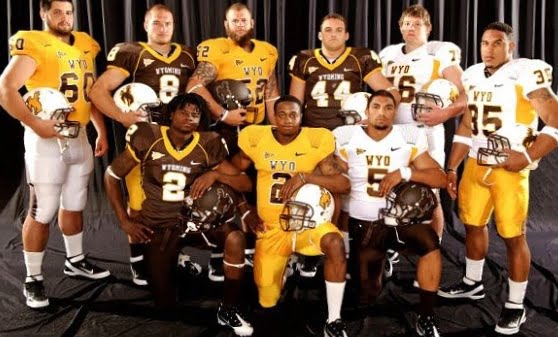 Maryland tries too hard. Look at these guys talking trash to each oth– wait, they’re on the same team. 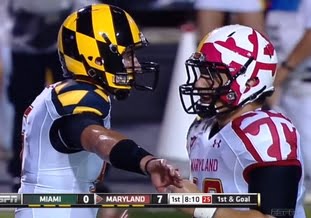 Northwestern had that gothic mess, but I’m not a fan of their actual uniforms. Stripes across the numbers? 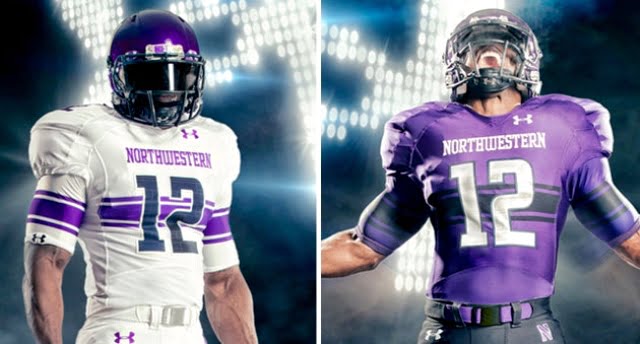 I’m not really sure who has the worst, but all of these are down there at the bottom.

OKansaslahoma State wore these helmets a couple of times:

But I think we can say RIP to these.

Southwell: At least those Pete helmets are better than this. Puke on UConn. 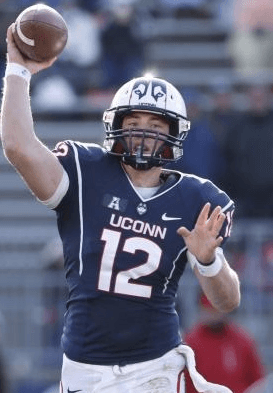