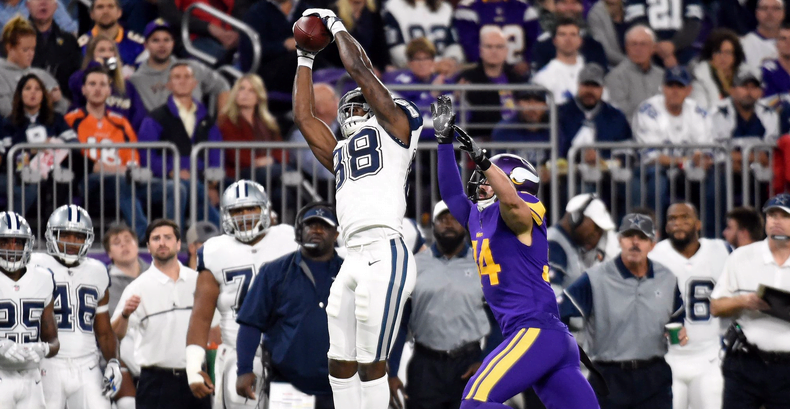 During the Thursday night match-up between the Dallas Cowboys and the Minnesota Vikings, Dez Bryant caught the 65th touchdown pass of his career.  That mark tied former Dallas Cowboy receiver and now hall-of-famer, Michael Irvin. He was so excited for his boy, he took some grass and put it in his .. pocket, I presume.

Love being at my @Dallascowboys vs @Viking game. I got to see my son @DezBryant tie me with his 65th TD. Congrats 88❤️⭐️? pic.twitter.com/eVEuDIuHMt

Dez finished with four catches for 84 yards and that historic touchdown catch.

During the post-game show Michael Irvin himself asked Dez what it meant to him.

“You know it’s cool, you know, but I’m gonna take it back to what Zeke said, it’s so much bigger than that right now, as long as we just stay committed and stay focused, good things are going to happen.”

Irvin accomplished the feat in 159 games with the Cowboys. Bryant has done it in just 93.

At 65 touchdown receptions as Cowboys, Bryant and Irvin share the right to second place in Dallas Cowboy history just ahead of tight end Jason Witten with 62 touchdowns (in 219 games). That’s behind Dallas’ all-time leader, Bob Hayes, who had 71 TD-receptions in 128 games.

The Cowboys beat the Vikings 17-15 at U.S. Bank Stadium, in an historic night for the Cowboys and Dez Bryant who move to 11-1 on the season.