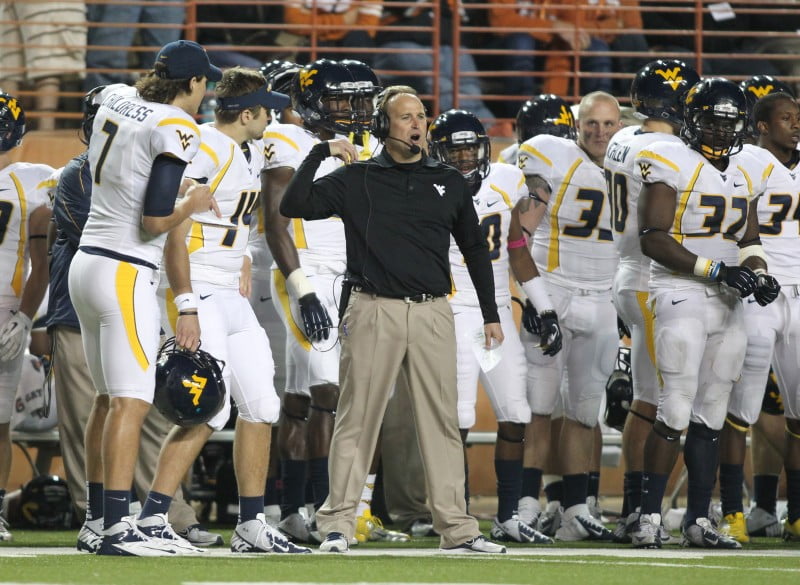 It’s sad there’s not much buzz going around about this game, but it’s nobody’s fault but the teams’.  I was one of the few that thought West Virginia would struggle in the Big 12, but most chose to look at that offensive show the Mountaineers put on in the Orange Bowl last year.  However, they’ll be competitive in the conference and I’m thrilled to have them on board.  The 2013 Mountaineer Man Trip is going to be nothing short of epic.

I can’t help but think Stedman Bailey and Tavon Austin will find the holes in our defense, and if we don’t get pressure on Geno, one would have to think he’ll be hitting one of those two guys often.   We haven’t faced a fierce passing attack since David Ash put up 300+ and 3 against us.  The good news, we’ll score plenty ourselves whether it’s Lunt or Chelf.

I feel like no matter how high this number is, it would take serious convincing for you to take the under.  Does anyone really think 100 is out of the question?

3) Which will be higher:  Total turnovers for the game or Number of bars/clubs/casinos Dana will be kicked out of during the rest of 2012?

The Mountaineers will go almost a full month without playing a game in December.  That’s too long without a game for our boy to not go crazy.  Yes, I said “our boy”, because we love Dana here at PFB.  This prop bet brought to you by @sox_guy99.

OSU ranks last among FBS schools in yardage given up per kickoff return at 33.46.  Second to last is the terrible, former Big 12 foe, Colorado at 28.00 yards per return.  That is a huge difference.  I couldn’t figure out what was going on in Manhattan.  Were we determined to make them start behind their own 25-yard line?  I understand if Quinn wasn’t getting all of it, but it seemed like he wasn’t trying to get it through the uprights.

5) Who does OSU have a better chance of winning with at QB against West Virginia:  Chelf or Lunt?

Obviously, not a prop bet.  I’m just curious what the fan base’s opinion is here.  I have a hunch and I have my own opinion, but I don’t want to influence anyone’s decision (not that I would), so I’ll shut up now.

6) Which team will have more total yards?

OSU ranks 2nd nationally in yards per game, 5.6 yards behind a school that I prefer not give credit to.  West Virginia is 19th with 95 yards less per game than the Cowboys.  Nonetheless, I still thought it’d be fun to include this one.

7) Will the jersey number of the first Cowboy to get in the end zone be odd or even?

The Even crew consists of Chelf (hey, Weeden had a rushing TD last year), Black Jackson (please catch it), Justin Gilbert (he has to take a kickoff all the way or come up with a pick-six at some point, right?) and Austin Hays.

The money has to be on the Odd team: Randle, Stewart, Moore and Smith.  Oh, and my favorite, Kye Staley.  This really isn’t a fair bet now that I look at the odds.

8) Which will be greater:  Number of OSU kickoffs that don’t go for touchbacks or number times our defense sacks Geno Smith?

Given our kickoff coverage is so bad, I felt the need to double up on it this week.  There is absolutely no reason Quinn shouldn’t attempt to kick every one through the uprights.

If you’re feeling lucky, you can make your pics HERE!