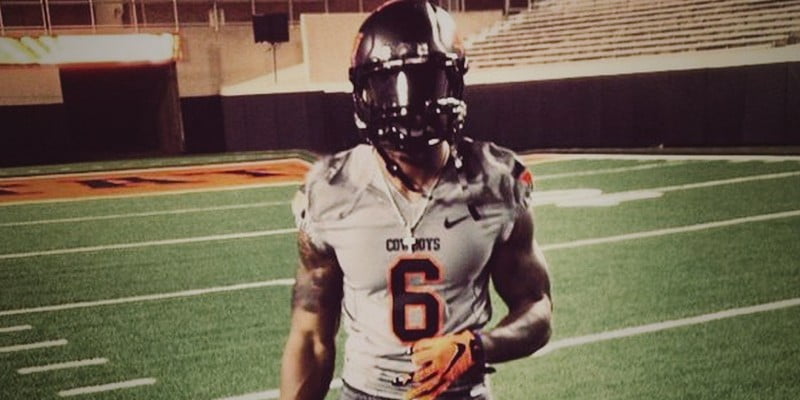 It feels like we’re getting mildly ahead of ourselves when it comes to the 2015 OSU football season. There’s good reason for that. Namely, this. But there are still plenty of question marks. The foremost among them probably has to do with the offensive line, but the running backs aren’t far behind (both literally and figuratively).

OSU’s running game has always been imperative to its offensive identity. Use the pass to set up the run. That certainly works much better when you have NFL-like talent standing next to the quarterback in the backfield. OSU has had that kind of talent in the last five years.

I don’t know who’s going to get the third 10 carries (and that’s going to be really interesting going into the fall), but you’d have to think Chris Carson and Rennie Childs will battle between the first 20 and the second 10. Gundy is spot on with his math, by the way (which is mildly surprising).

Here are the number of carries per game OSU has averaged since the Dana Holgorsen Era.

That’s a lot. In that time, the running back who has gotten the most carries has averaged about 18 a game and posted the following numbers (yards, yards per carry and TDs in that order).

Here’s where it gets interesting for Carson. I believe he’s a NFL-like talent, I really do. And I think he’ll get the lion’s share of the workload. Is he Joseph Randle? I don’t know. Joseph Randles don’t just fall into your lap every few years like Carson seemingly did. But I certainly believe he’s more talented than Desmond Roland.

It should be noted that Roland’s 2014 numbers are pretty unfair in retrospect. Those 2013 numbers are a better indication of who he is given that OSU’s offense in 2014 was about an 8 on a scale of 1-to I-35 on OU-Texas weekend in terms of being jammed up.

The only reason he didn’t post more carries and yards in 2013 (only 14 carries a game) is because OSU let its QBs run a lot more that season than I believe they will (hope they will) with Rudolph.

So let’s say Carson gets the average of 18 carries a game and puts up 5 yards per carry (not a crazy number given what Randle and Hunter averaged and the fact that Carson put up 7.15 yards per attempt in his final JUCO season).

Can he post 240 carries, 1,200 yards and 12 TDs? I think he can. And if he does, you’ll know OSU’s once-potent offense is to be feared again. Not because Chris Carson is leading it, but because it is allowing Chris Carson to succeed.