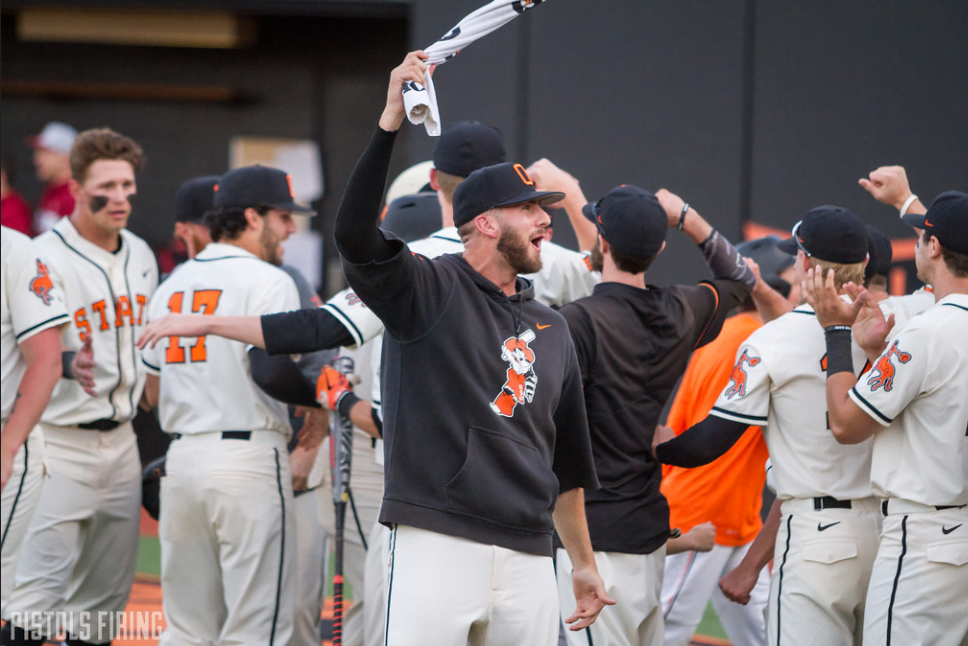 For the first time since 2010, Oregon State was swept in its home ballpark, and the Cowboys are the team that reset that clock.

After sweeping the defending national champions, the Oklahoma State baseball team jumped up has high at No. 16 in the national polls. That’s a number the Cowboys will hope to relate to at season’s end as one of the 16 teams to host a national regional.

Although it was a great series victory, sweeping Oregon State doesn’t push the Cowboys any further up the Big 12 standings. It’s hard to call the Cowboys inconsistent in conference play this year with how hectic the Big 12 has been.

Historic power Texas is last in the conference after being picked to finished fourth. TCU had a first-place vote in the preseason poll but sits below .500 at 8-10 to this point. The Cowboys are in third in the league despite being only two games above .500.

The Pokes sweeping Oregon State should say something about the overall power of the conference, despite the cluster on the standings. That sweep could be a deciding factor in favor of Oklahoma State hosting a regional if the Cowboys finish the season strong.

This weekend’s sweep put the Cowboys into a good position to host a regional, but there is still a lot of work to be done. That work starts this weekend with the Bedlam series.

The Sooners suffered the same fate the Cowboys did a week ago — on the wrong end of a Texas Tech sweep. Oklahoma is 8-10 in conference play to this point, and the Cowboys have already taken a nonconference game off the Sooners this season, a 6-5 walk-off victory on March 26, in Stillwater.

Although OU is below .500 in Big 12 play, the Sooners have won 30 total games this season, so if OSU could take two of three off its Bedlam rival, that should continue the Cowboys’ journey to hosting a regional.

After the Bedlam series, the Cowboys host league-leading Baylor in what will be the last series in Allie P. Reynolds Stadiums’ history. The Bears have jumped out to a 14-6 conference record. That series won’t be easy for the Pokes, but it’s at least at home.

The Bears are ranked unanimously at 14 in college baseball’s weekly polls, so winning that series would to push the Pokes to hosting a regional.

Then comes more opportunity for OSU to improve its resume at the Big 12 Tournament in Oklahoma City, which starts May 22.

In what’s an historic season for the Cowboys’ considering it’s Allie P.’s final year, everything is still possible. The Cowboys can still win a Big 12 regular season title with some help from TCU. The Cowboys would have to win out, and TCU would have to take two of three off the Red Raiders for OSU to celebrate a conference title in Allie P. for one last time.

The conference tournament will undoubtedly be difficult, but OSU has taken a game off every Big 12 team it has faced so far apart from Tech. And the Cowboys have shown they are College World Series quality with how they swept a Top-5 team on its home field. Now it’s all a matter of playing the games.