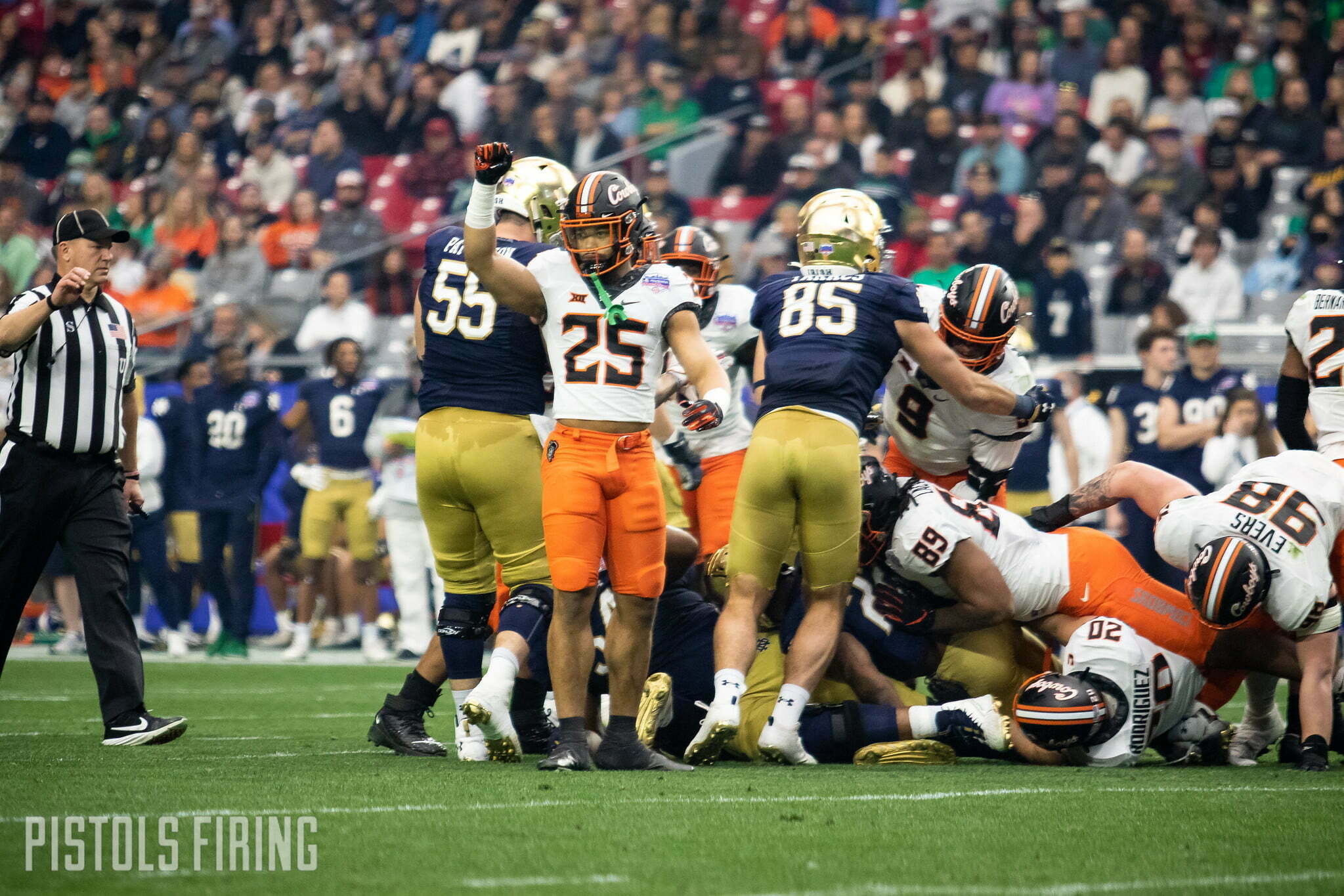 The 2021-22 college football season came to an end Monday night when Georgia slayed the giant and took down Alabama to win the national championship. The 2022-23 preseason informally began shortly thereafter, with outlets near and far publishing their way-too-early top 25 rankings for next season.

Is it too early to pay attention to these rankings? Probably! But OSU is getting quite a bit of love, for the most part, so consider me intrigued. Here’s a sampling of where the Pokes are being projected.

Outlook: The Cowboys came within a few inches of winning the Big 12 title and possibly reaching the CFP, but instead settled for a 21-point comeback in their win over Notre Dame in the Fiesta Bowl, which coach Mike Gundy called the biggest in the program’s history. With quarterback Spencer Sanders and most of the offense returning, the Pokes should be potent again in 2022. The defense will need a facelift — Knowles left for Ohio State and leading tacklers Rodriguez and Harper departed. Gundy isn’t sure whether he’ll promote from within or hire an outside candidate as defensive coordinator. The Pokes will play Big 12 road games at Baylor, TCU, Kansas State, Kansas and Oklahoma next season. (Via ESPN)

The Cowboys tend to be a program that does its best work when little is expected of it, so perhaps this is an inflated ranking. But Spencer Sanders played like a superstar in the Fiesta Bowl in leading a thrilling comeback to beat Notre Dame and could be poised for a huge season. He’ll need to be that good in 2022, because Oklahoma State will probably take a step backward defensively after losing Knowles and many of its top players on that side of the ball. (Via SI)

The word: Oklahoma State cracked the top 15 of our way-too-early rankings, but opinions on the Cowboys were not unanimous. One analyst excluded Oklahoma State from his preseason ballot completely while a few others believe Mike Gundy’s team could hover somewhere around the top 10.  After finishing with a 12-win season, it might be hard for the Cowboys to replicate 2021’s success, which would warrant top-10 billing. Quarterback Spencer Sanders improved his 2023 NFL Draft stock with his MVP performance in the Fiesta Bowl and will have another say in where he’s picked with another successful year under his belt. (Via 247Sports)

In 2021, the Cowboys tied the school mark for most wins in a season (12), came inches away from a victory in the Big 12 title game, and rallied from a 21-point deficit in the Fiesta Bowl to defeat Notre Dame. Coach Mike Gundy has work to do on both sides of the ball for Oklahoma State to win the league crown, but in a wide-open Big 12 next year, the Cowboys should be near the top of the list of favorites. A defense that limited opponents to 4.6 yards per play and 18.1 points a game faces a significant overhaul with coordinator Jim Knowles off to Ohio State, along with personnel departures including All-Big 12 linebacker Malcolm Rodriguez. The return of ends Collin Oliver and Brock Martin (19.5 combined sacks) is a good place to start the rebuilding effort. Quarterback Spencer Sanders closed out the year on a high note by throwing for 371 yards and four touchdowns in the Fiesta Bowl and is set to start under center for the fourth year in a row. Receiver Tay Martin will be missed, but the Cowboys return promising options in Brennan Presley (50 catches in 2021) and Blaine Green (21). The offensive line is in good shape, while Dominic Richardson will power the ground game. Gundy’s squad gets Baylor, TCU, Kansas State and Oklahoma on the road, with Texas Tech, Arizona State, Iowa State and Texas coming to Stillwater. (Via Athlon Sports)