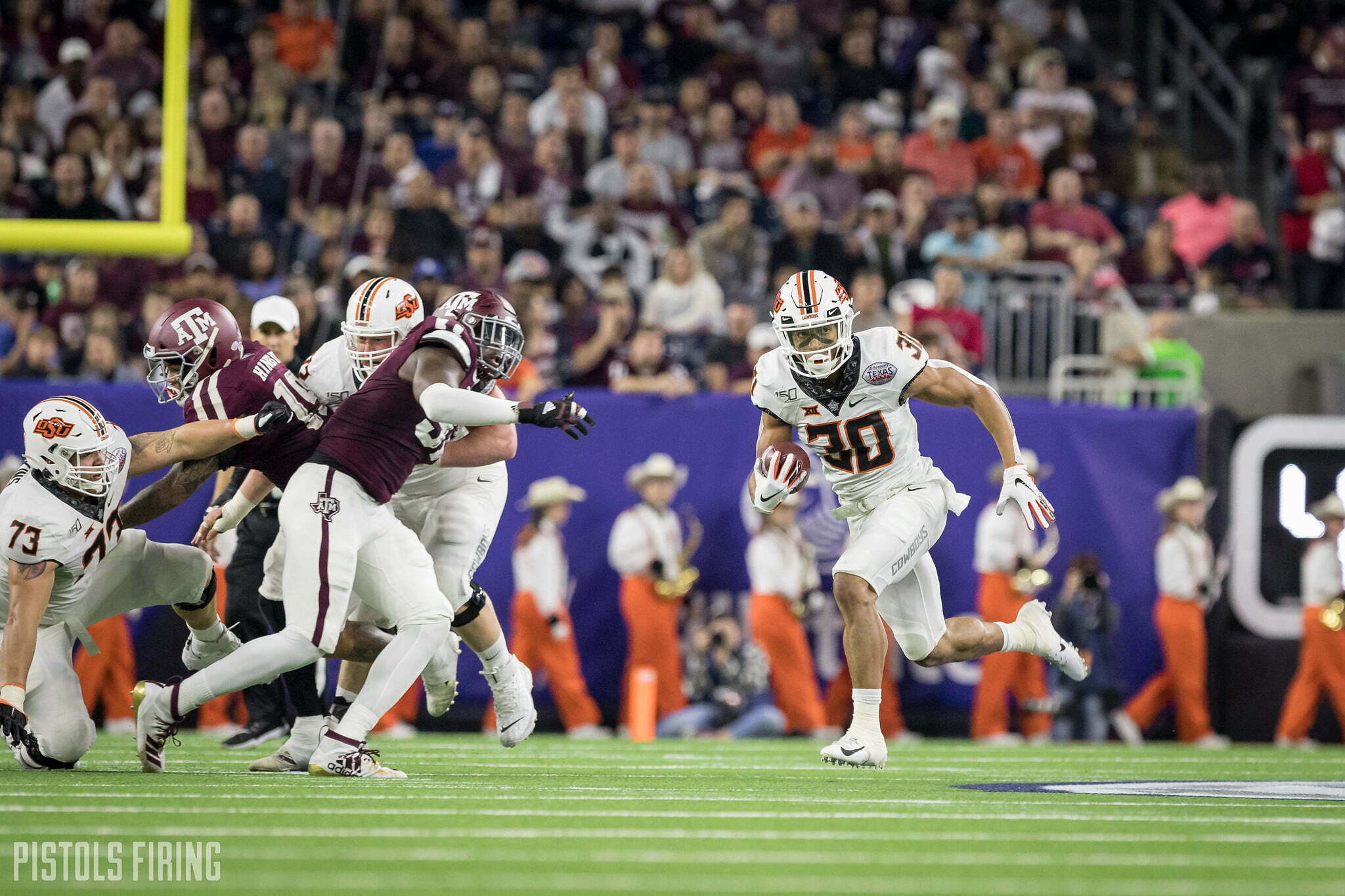 “But to get to a point where you can potentially finish for a conference championship, you have to have NFL players on your roster. You have to get great quarterback play. We’re going to have a number of guys on our team next year that are good enough to play in the NFL.”

KP and I had a discussion on this topic and below I’ll cover who I think Gundy is referring to on the current roster. I’ll start with the offense, covering the defense in a second post, and the first section will consist of guys who will most likely be leaving after next season and have the potential to be contributors at the NFL level in the future.

Savor the next dozen or so games with these Pokes, cause it will likely be the last season you see them in orange and black.

It’s been three weeks since Chuba Hubbard announced he would be returning to Oklahoma State for the 2020 season. The Canada product was being graded as anywhere from a second to fifth round draft pick in this upcoming draft before he decided he would be coming back to Stillwater, resulting in him being one of the first names I think of when I read Gundy’s quote above.

He also has 45 receptions for 427 yards and another two touchdowns. He’s currently 11th on the OSU all-time rushing list in terms of yards, and needs 2,013 yards to break the all-time record held by Thurman Thomas. If he has another year even close to the one he had this year, he will be one of the top running back prospects heading into the 2021 draft.

Player Comp – Demarco Murray: Murray was a speedster like Hubbard, running a 4.41 40-yard dash at the NFL combine. The former Cowboy put this speed on display during runs like the one shown below.

The two are similar in size, with Murray entering the NFL at 6-0, 213, and Hubbard currently listed at 6-1, 207. Along with being fast, smooth runners, both players also possess the physicality to carry it between the tackles.

As this past season ended, the Pokes knew they’d be heading into next year without talented guard Marcus Keyes. However, OSU may have  found his replacement in West Virginia graduate transfer Josh Sills. The 6-6, 326-pounder started for two seasons as a Mountaineer before missing nearly all of 2019 with a shoulder injury.

Sills is a versatile guard who played all over the offensive line for WVU. I’ll have a film study coming out on him as part of my 2020 class breakdown series, but from what I’ve watched on him so far, he moves exceptionally well for his size. As a puller, he takes solid angles and does a good job of blocking in space, as shown below (he’s No. 73).

His footwork looks sound and he seems solid in pass protection. He’s a physical blocker with great technique, which earned him a spot on the All Big-12 second team two seasons ago. Sills will be eligible to play immediately for OSU, and even though I included him in the “Next Year NFL Guys” section, there’s a chance he is granted another year of eligibility via a medical redshirt.

Player Comp – Ramon Foster: Current Pittsburgh Steeler Ramon Foster is similar in size to Sills, standing 6-5, 328 pounds. Additionally, he’s been known to make some nice blocks on the pull, as shown below, and also rocks number 73 like Sills.

The 11-year NFL veteran and the former Mountaineer are also similar in that they both are blocking technicians and have good footwork.

Jenkins has been a key part of the OSU offensive line since 2017. He played in all 12 regular season games that season, seeing time at tackle and guard. Since then, Jenkins has been a starter and lined up at both right and left tackle, although his primary spot was on the right side of the line. Standing at 6-6, 310 pounds, Jenkins possesses the size, strength and athleticism to play at the next level.

The Topeka, Kansas native is a force in the run game, as shown in the clip below.

He also has great hand placement and footwork as a pass protector, and has been one of the best, if not the best linemen for the Cowboys the past two seasons.

Player Comp – Ryan Ramcyzk: It’s hard for me to make it through player comparisons without including a New Orleans Saint. Although, in this case, I think it’s a good fit. The 6-6, 314-pound offensive tackle is an absolute mauler as a run blocker, and both he and Jenkins have incredible strength, which Ramcyzk displays in the clip below.

Both players are solid in pass protection, and excel in both of these areas will garnering few penalties.

Wallace’s season ended early in 2019 due to an ACL tear. However, the former Biletnikoff finalist still racked up 903 yards on 53 receptions and scored eight times. These numbers bring his career totals to 146 receptions, 2,512 yards and 20 touchdowns, which ranks him sixth on OSU’s all-time list. Like Hubbard, there was a lot of talk about Wallace leaving early despite the injury. But, the star wideout provided a New Year’s Day present for Cowboy fans as he announced his return via Twitter.

Although he only stands 6-0, 185 pounds, Wallace’s physicality and ability to adjust his body to make tough catches has NFL scouts raving. This along with his explosive speed bursts, solid route running and ability to make plays after the catch, shown below, have most projecting him in the first or second round next season.

Player Comp – Donald Driver: Driver may be faster than Wallace, but both players are physical — although both are only 6-0 and below 200 pounds — and know how to go up and make a catch. Driver also possesses the big play ability with the ball in his hands, similar to Wallace, as he displayed in the following video.

For the second section of this post, I’ll cover several players who I don’t think are leaving after next year, but have shown flashes of being possible “NFL guys.” I only included Cowboys who have seen a good amount of playing time, although there are some talented younger players who are very exciting as well.

Johnson has recorded 498 yards on 25 catches with four touchdowns over the course of 14 games with the Pokes. Heading into his redshirt junior season, the speedy wideout looks be one of the key guys in the receiver room along with Dillon Stoner, Landon Wolf and Tylan Wallace.

Bray played a primary role on the Cowboy offensive line this past season, seeing time in all 13 games with 10 starts. He will most likely be at right guard this upcoming season, although he spent time at both guard and tackle positions last year. He’s shown to be a dominant force in the run game, and think he has the potential to get to that level in pass protection as well.

The quarterback turned Cowboy Back doesn’t have eye-popping stats in his two seasons playing for OSU, tallying 23 receptions for 232 yards and three touchdowns. However, with his athleticism and blocking ability at 6-7, 265 pounds, I think there are plenty of NFL offensive coordinators who could find use for Woods at the pro level.

The former four-star recruit had some ups and downs in his first season, which was to be expected from a young quarterback, but he showed a lot of upside and made some impressive plays. He’s definitely not there yet, but I think he has a high ceiling and could maybe see the field in the NFL if he continues to improve during his Cowboy tenure.