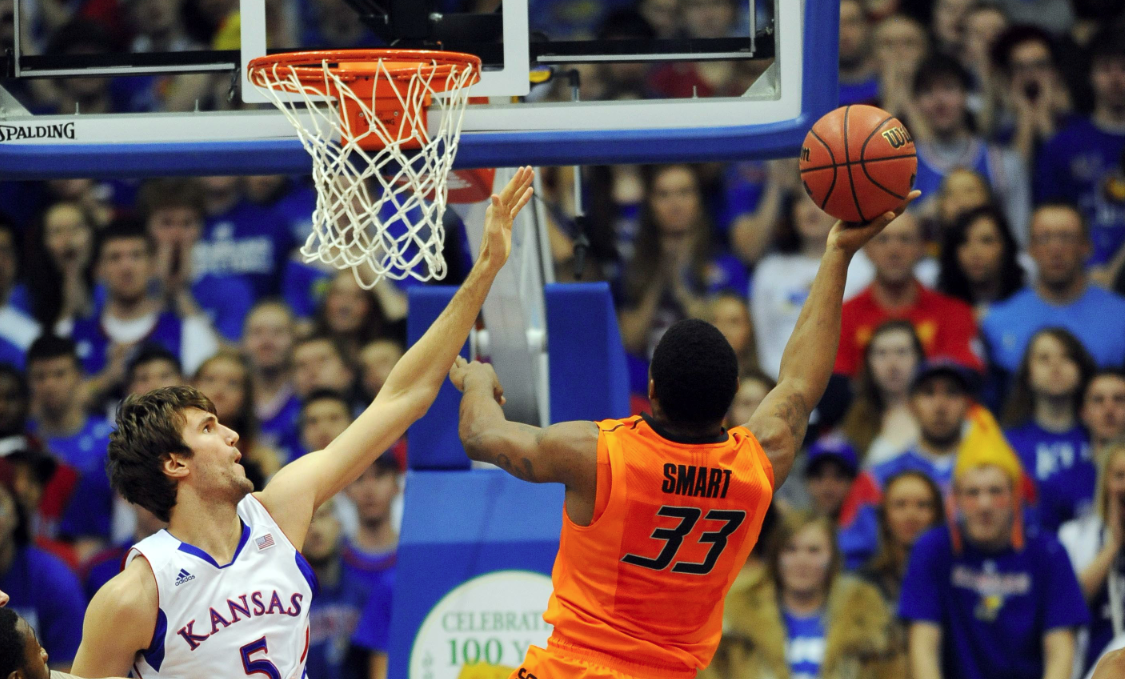 There’s not a lot about the last two weeks that suggests to me that OSU should be able to play with KU in Allen Fieldhouse on Saturday.

There were a pair of brooding dismantlings by KU — first of Kansas State at home and then of Iowa State in Hilton. And Oklahoma State hasn’t exactly looked conference title-winning worthy of late.

They struggled against a West Virginia team that Texas had no trouble with. They got beat by that same Kansas State team KU lit up, and provided uninspiring victories against Texas and TCU (the latter because nothing that happens regarding TCU hoops is ever “inspiring.”)

But Marcus Smart doesn’t get blown out in big games. His worst regular season loss is an 11-point game against Iowa State in Ames last year. His teams have only been beaten by double digits twice.

There will be no 20-point demolition or stamped seal of approval from Phog Allen on this year’s Big 12 title race. If OSU loses, it will at least lose greatly — Bill Self will want to pull his toupee off more than once.

If OSU loses it will do so in such a way that says “this race isn’t even close to over…there’s a long way to go.” And if it wins? Oh boy, I’m not sure KU fans can handle two straight years of that.

Allen Fieldhouse is a kingmaker.

If you can solve its riddles and tame its 16,000+ fans you deserve (and often receive) the accompanying spoils. The riches displayed very prominently in the walk-in hall of fame that shelves so much history, they’re all yours.

I think that’s what most KU fans didn’t understand about the backflip last year. That wasn’t a shot at KU or Elijah Johnson or Kansas lore or anything like that. It wasn’t premeditated or done with ill will.

That was a coronation.

That was an “I’ve conquered one of the seven wonders of the college basketball world” leap into the history books. It was him driving his flag into the northern territory of the Big 12 and scrawling “Marcus wuz here” into the floor like he was Brooks at the end of Shawshank.

The funny thing about returning to a territory you’ve made your own is that there’s an empty feeling about it. I’ve already done this, what more does it want from me? Can I do it again? Is that in me?

That’s the great thing about having No. 33 running out of the tunnel first, though. He’s wiped the slate clean. Last year’s conquests might as well have been last century’s conquests.

He wants another coronation.

The memories of us who care often forget (with good reason) what our favorite players did against Utah Valley or Delaware State or even Nebraska and Texas Tech and West Virginia. There are few opportunities to seal your legacy like what you do against Kansas and/or OU and I think the players on this team are fully aware of that.

I don’t know if OSU will win on Saturday — I’m pretty hesitant to ever say this team definitely won’t win against any basketball team short of one exchanging jump shots for paychecks — but I know they’ll roll with Kansas for as long as the hoop gods will let them roll.

There is the matter of Joel Embiid and the unholy things he’s likely going to do against Kamari Murphy and, my gosh, if we let Soucek out there on him I might not be able to watch.

And there are the Andrew Wiggins and Perry Ellis problems, respectively. Solvable problems, but problems nonetheless.

But OSU has a few complications of its own to throw at Self and Co. The most notable being a 6’3 shooting guard from Louisiana who hit seven three-pointers last time he played in Lawrence.

There are others, too. Le’Bryan Nash has been playing wonderfully of late, Phil Forte is always a threat for three or four bombs, and Brian Williams is coming off a great game against TCU.

But it all points back to Smart.

There’s a great oral history of the Kevin Durant-Allen Fieldhouse game from 2007[1. You should really read all of it, it’s so fantastic.] in which the sports director of a local news station named Kevin Romary gives this great quote about Durant and that famous 25-point first half.

The hate for Marcus Smart runs thick at a handful of Big 12 arenas splayed across the midwest United States but nowhere does it run deeper or more willingly than in Lawrence.

The backflip was offensive, yes, but the win for OSU was so much worse.

You don’t just waltz into Phog Allen and strip KU of its haunting, beautiful chant at the end of a January game without paying a price. They see that chant as a foregone conclusion, their God-given right.

But that’s what Marcus did.

The Durant game, KU fans loved that because it was reverential but in the end they get to sneer and laugh at the fact that hey, KU hoops trumps even the great Kevin Durant.

So what do you do when a different freshman comes in and disrupts that precious narrative?

We’ll find out on Saturday but I’m guessing the venom will flow fresh and it will spill into the corners of the fieldhouse. There will be no “you’re a flopper” chant like there was in Manhattan or “Mar-cus” like there was in Morgantown.[1. Again, can’t believe that happened.] No, Kansas fans are better than that, more creative, and a lot meaner.

He thrives on it, though. Craves it, even.

He’s a different cat, that’s for sure. He seems to run his coldest in the biggest games — that’s not a trait many mortals have possessed as they passed through Lawrence.

Desmond Mason never won there, Mo Baker never did, John Lucas, Tony Allen, James Anderson, Randy Rutherford (God bless him, he sure tried). None of them ever spun history on their fingers in that great building.

Now Marcus (and Markel and Nash) can do it twice. Markel laid out OSU’s blueprint after last year’s W:

“We had to come out, punch them in the mouth and not let the crowd get into it.”

That’s certainly true and the past 12 months have shown just how excited Kansas fans are about getting punched in the mouth.

I’m not sure if that will work again, though. The Fieldhouse wasn’t ready for this show in January 2013 like it will be tomorrow afternoon.

So as the KU fans spill in from the cold of Lawrence and Marcus and Co. scratch the stadium’s belly just before tip there will be a moment when all is quiet.

The far reaches of the arena will be eerily still as Kansas fans get ready to sing and chant and do that thing they seem to do better than any college basketball fans in the world: run opposing teams out of the gym before the game even gets going.

Marcus and Markel will try to punch them in the mouth again and if they can’t do that they’ll have have to drag their team back in it over and over again. They’ll have to go to that place they went to last year repeatedly. Except this year will be harder because they’ve already gone to it so often and there seems to be a finite number of times you can dip into the well against Kansas and its crowd.

This year will be so much harder because that place has a way of tilting history back into the favor of the blue and white. Rarely has any college basketball player left an unscathed career at the feet of the Phog.

Tomorrow will be splendid because Allen Fieldhouse is a kingmaker. Always has been.