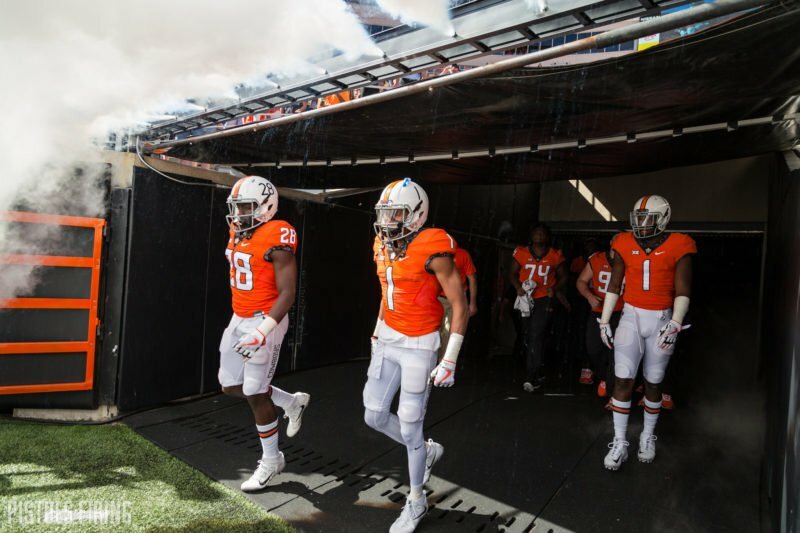 Remember this time last year? Expectations were higher than Ricky Williams on a trip to the Pacific Northwest. It wasn’t which postseason game would OSU play in but rather, “How many?” Anything less than an Instagram video loop of Mike Gundy flailing his limbs inside of Jerryworld in early December was going to be a disappointment.

And then TCU happened. And OU and Kansas State following that. Last year, while exhilarating and awe-inspiring and ambitious at times, was tense. There is a cost that comes with being a top 10 team in the country, and it’s not an insignificant one as a fan. When much is expected, the fist pumps and yelps are not the result of celebration but rather, they are physical manifestations of sheer relief.

We didn’t lose to Texas. Not this year, Iowa State.

It’s something. I’m not sure fun is it, though. The good news for programs like OSU (and fans like OSU’s) is that expectations are not mighty every year. This is not Tuscaloosa. Heck, it’s not even Norman. And because of that, there is still room to be surprised. This is the part I like. I wrote a post a few years ago about how I would rather be Oklahoma State than Alabama or OU. I got laughed off the internet, and I probably deserved that. But I also believe it.

Because in a world where the haves have nowhere to go but down, those that exist somewhere between have and have not can be — and often are — anything. Oklahoma State has a broad range of outcomes this year that its fan base would find acceptable. This makes for more reasonable week-to-week expectations, but it also supplies us with an emotion fans of juggernauts don’t feel: Delight. If Clemson or Ohio State go 11-2, there is not delight. There is only much exhaling and a look toward 2019 recruiting classes.

If Oklahoma State goes 11-2? Whoooo buddy, there might even be a parade for Mike Yurcich down Duck Street. OK, that’s probably not true barring a 15-0 campaign in which Taylor Cornelius throws for 12,000 yards and 112 TDs, but you understand where I’m coming from. We have been freed from the shackles of starting with a single digit next to OSU’s name in the poll and are able to consider the possibilities.

Is this where you should want to be — where I’d like to be — every year? Of course not. It’s not fun to be South Carolina. But the down years have a way of providing the best memories. Take 2013. OSU was coming off an 8-5 campaign with Todd Monken and Dana Holgorsen gone, a new DC and a handful of question makes at QB. They lost their Big 12 opener at West Virginia, and then after that? Pure bliss, punctuated by Gus Johnson raving about Clint Chelf and the law enforcement in Lubbock, USA.

That run was a thrill. All runs are, but that one had a Friday Night Lights feel to it. It was a real “Yo, we aren’t really supposed to be here, but we’re not only going to spend all the house money, we’re going to watch it burn and then give a little bit to Justin Gilbert and let him watch it burn, too” feel.

So maybe this season goes poorly, and we’re all left wanting come late November. Guess what? That’s fine. If OSU goes 8-4 it’s within the realm of what we expected. Maybe a young QB gets experience — the thing Gundy craves so much — and Justice Hill miraculously returns for a team that is suddenly a Big 12 title favorite in 2019.

But maybe it doesn’t go poorly. Maybe Corncob is actually kinda great. And maybe OSU starts the season 6-0 with a little pizzaz. Maybe we see another single digit next to the name.

Sports exist so that folks can congregate around a dream. The hedge in 2018 as is often the case when a batch of elite, program-changing players moves on, is that there’s little downside. A dream can’t be a nightmare if the downside is this shallow. It can go the other way, though, and that’s exactly the fun of it. Thinking about what a team will be and then watching that team exceed even your wildest scenarios is what this season could be all about.