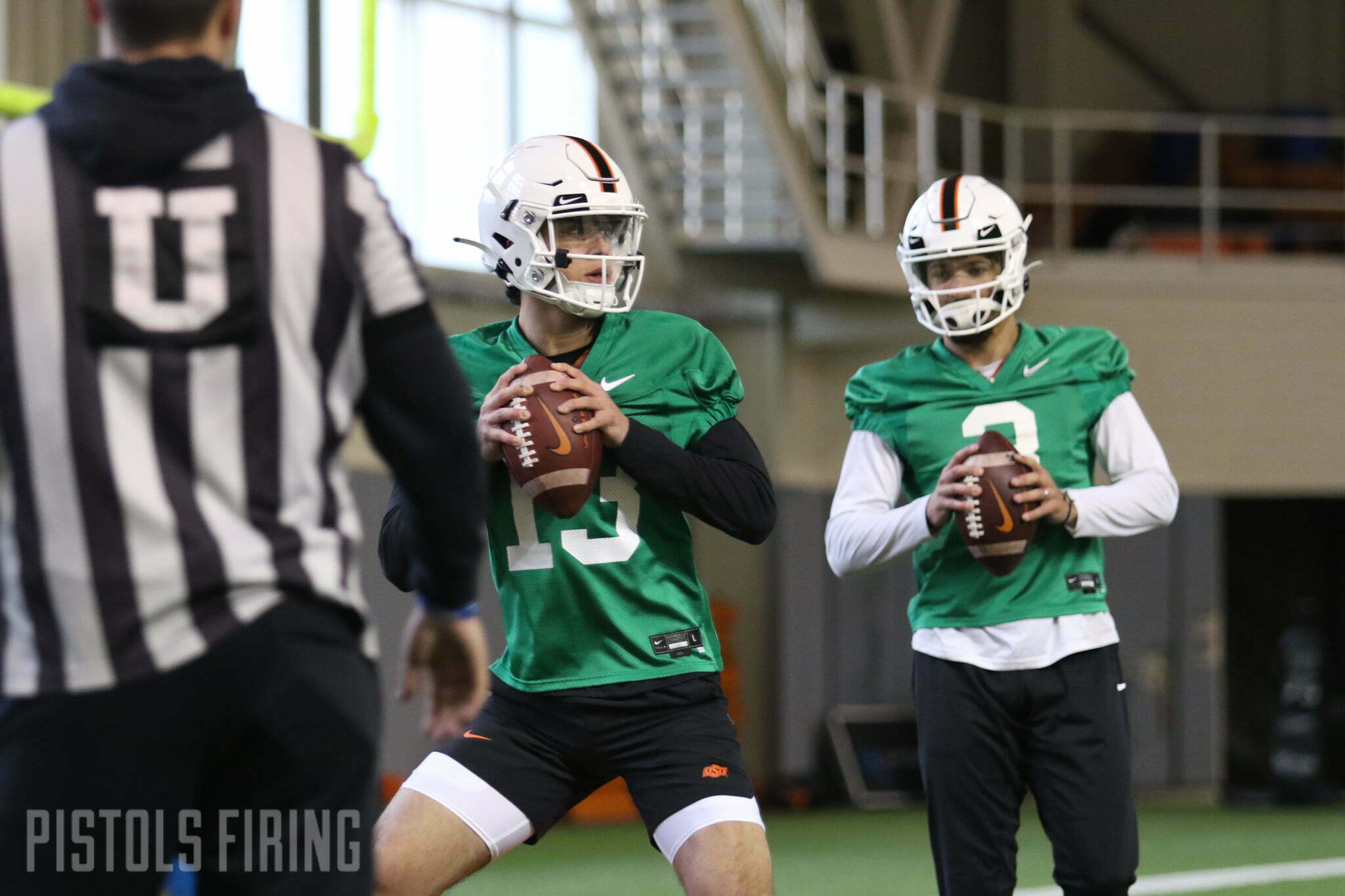 STILLWATER — Spencer Sanders will have a new backup in 2022, and whoever that is will be inexperienced.

Aside from Sanders, no one on Oklahoma State’s spring roster has thrown a collegiate pass. Shane Illingworth acted as the Cowboys’ QB2 the past two seasons before transferring to Nevada this offseason. As the Cowboys started spring camp Tuesday, Sanders took the field with redshirt freshman Gunnar Gundy, true freshman Garret Rangel and redshirt junior Peyton Thompson.

“Well, I’m always worried about quarterback depth,” OSU coach Mike Gundy said. “Been fortunate in the past that we’ve gotten to our second-team quarterback, and even to our third-team quarterback, and they have played pretty well. In my opinion, playing quarterback at this level is more difficult now that it has been in my 30-something years in college football for two reasons. One, because defensive linemen at this level are starting to change games like defensive linemen have been in the NFL for 20 years. Such better athletes than we’ve ever seen rushing the quarterback. And two, the systems on defense are much more complicated than it used to be even six, seven years ago.”

Gunnar Gundy is probably the early favorite to be Sanders’ backup entering spring camp. Mike’s son, Gunnar got some playing time against TCU last season, where he had one rush for a yard. Before that, he played at Stillwater High, where he led the Pioneers to 12-1 seasons as a junior and senior. He threw for 3,481 yards, 47 touchdowns and only three interceptions as a senior. He turned down offers to Eastern Michigan and Toledo to walk-on in Stillwater.

An early enrollee, Rangel was a four-star recruit in the 2022 class, picking OSU over offers from Virginia Tech, Houston, Vanderbilt, Northwestern and others. He dealt with injury his senior season at Frisco Lone Star High School (Texas), but still, he completed 68% of his passes for 1,989 yards and 24 scores to only three INTs. Listed at 6-foot-1, 181 pounds, Rangel still has some physical development to do.

“He’s a great leader,” Sanders said of Rangel. “He’s already a great leader as a youngin. He learns. He listens. His eye contact is 100%. He’s a real good guy. He’s a good person, as well. Honestly, I just want to watch him keep learning, watch him develop. Him and Gunnar are the first quarterbacks I’ve seen come in here as — well and Shane, too, but Shane’s gone now — but as a newbie. Just watching them learn from my experience right now, it’s just kind of cool because I was in those same shoes.”

Lastly, Thompson has been on the Cowboys’ roster since 2019. He walked on from Tulsa Union High School after throwing for 5,700 passing yards and 66 touchdowns in his high school career.

“They’re young,” Sanders said. “They listen. They’ve got great leadership (ability). Hopefully they can come out and they can be a great plus to this team.”

With that being said, there is a non-zero chance that Gundy, Rangel or Thompson are called upon in 2022, so gaining some sort of experience this spring would be a big deal. Mike Gundy said Sanders will need to let the younger group get a few more reps this spring with how experienced Sanders already is.

Although a lack of QB depth seems extra prominent at OSU, Mike Gundy said he thinks it will become somewhat commonplace throughout the country with the transfer portal being as open as it is.

“I think it’s gonna be an issue that we all have across college football because with open transfer, that’s the one position where it seems to be leading the charge that if that player is not the quarterback, then we’re seeing them take the tendency to just go somewhere else and want to be the guy,” Gundy said. “So, I think this is gonna be common. I don’t know that it’ll be easy to keep more than two to three quarterbacks on scholarship at once, just based on the availability of the open market.”