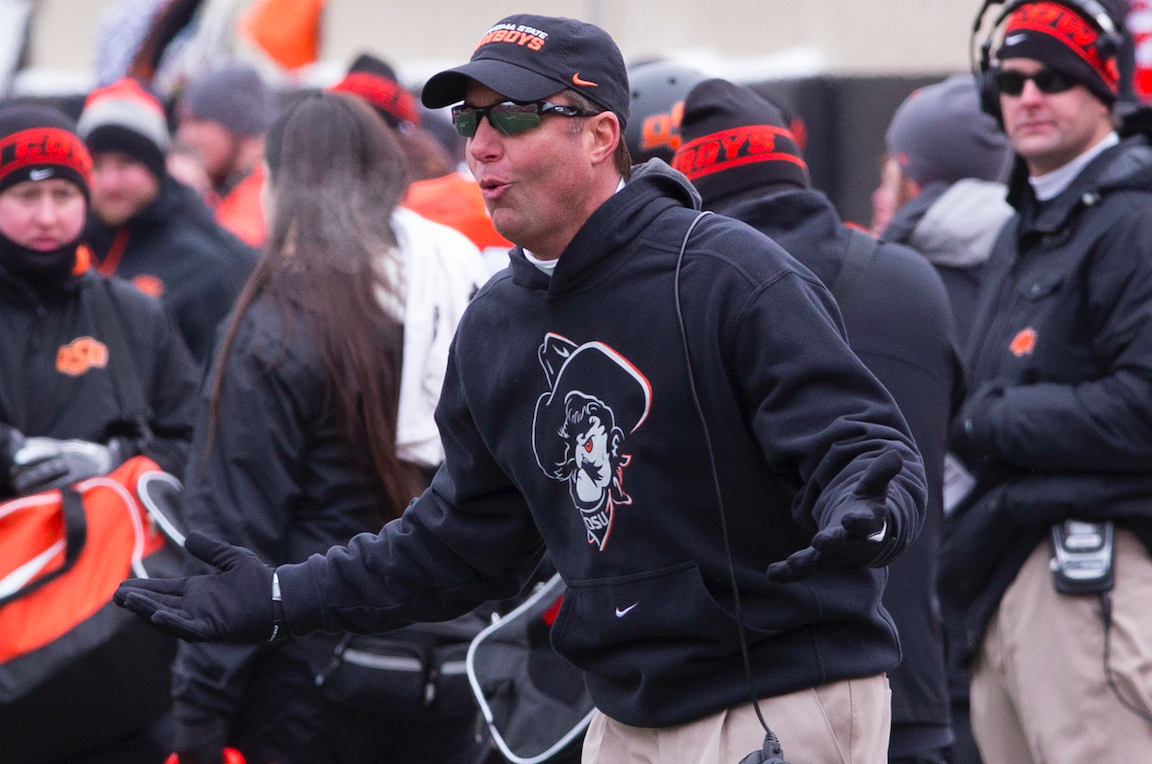 The answer to the headline is obviously “yes” because anybody will do anything for the right amount of money.

This should be obvious.

The real question is “based on the amount of money Texas is going to pay its coach and pending mutual interest from both parties….would Mike Gundy really leave OSU for Texas?”

I’ve said for the last two years that I think Gundy + Texas would be awesome for everyone involved (obviously we, as OSU fans, are not “involved” in this scenario and it would be decidedly “not awesome” for us).

I do wonder who Texas thinks is on its list. Texas fans obviously have a different list than the people actually making decisions for Texas though I think the latter still has an inflated view of what its limitations are (namely, that they think there are none).

There are limitations, though. There always are. Nick Saban will not be the Texas head coach and neither will Mike Tomlin nor any of the Harbaugh brothers, cousins, or in-laws.[1. I do sort of wonder what’s stopping Texas from throwing $15 million at Saban. Why not? Are you arrogant enough to think you can make an equivalent hire for less money? Are you worried about the future market? Didn’t that sort of go out the window when the Longhorn Network was birthed? Is it a business decision? Who the hell is in charge at Texas anyway?]

But those are mostly self-inflicted limitations (how warm is that bed you’re sharing with ESPN, guys? You still enjoying that?) and none of them are limitations that would deflect a coach like Mike Gundy from taking the job.

Bob Stoops has always said that 10 years at a specific school is perhaps enough. Gundy, I know this is nearly impossibly to believe, just completed year No. 9 and hasn’t he sort of accomplished all he can reasonably be expected to accomplish at Oklahoma State? What is left for him other than legacy?

He’s long said he doesn’t want to coach into his 60s which sort of begs the question of what his goals are for the next 10 years. If “making as much money as possible” is at the top of the list then Texas is a pretty logical step, no?

Let’s get something else out of the way real quick: Gundy would crush in Austin. I don’t care about 5-star recruits or any of that stuff, Gundy knows how to assemble a program.

Give him the freedom to overpay assistants and build his own schedule and manage at a place like UT and Bevo would be getting frisky with every single heifer in sight.

One of my favorite things about all of this is how fans, in their own lives, in their own jobs, prioritize “making a lot of money so I can take care of my family” above pretty much all else and yet when it comes to coaches a different set of rules necessarily apply.

“I know this is what I value and hold dear but because you coach this thing for which I have lots of hoodies and t-shirts I expect the opposite from you! You must fight for good and truth! Orange forever!”

I do understand that to double your own salary is more meaningful — has more of an impact on your day-to-day — than doubling Mike Gundy’s salary has on Mike Gundy’s life but that’s pretty easy for you (us) to say from the seat you’re sitting in.

But hasn’t Gundy kind of done the whole “loyal and true” thing? Doesn’t he, gasp, deserve a chance to run the show at a place like Texas.

Look, I love Oklahoma State — always have, always will — and Oklahoma State as a program is a far cry from what it was growing up. We are a legitimate top 20 program in the country. A contender for the conference every single year. It’s a wonder, really. It’s so much fun.

But we are not, nor anytime in the foreseeable future (at least while Gundy is still young enough to be a head coach), going to be on Texas’ level. When Texas is rolling it rolls. Same for OU, Ohio State, Alabama, USC, etc.

That has to be fun to think about as a professional whose job is to get a program to roll.

I do think Mike Gundy values his lifestyle but there are ranches and Gators and lots of land in Austin, too. He doesn’t seem to be embedded within the Oklahoma State program like he once was. Like he’s on the board, but not so much the president or CEO he once was.

For now that’s still a big if.

Depending on who you read or talk to, Gundy is one of the top five favorites to usurp Mack. This may or may not be a real thing but man, it sure makes that Tennessee free-for-all feel like not that long ago.

I don’t know the history of coaches switching teams in-conference — especially from a team that just played for a conference title to a team it has stroked three of the last four years — but I have to think it would be pretty unusual.

But Gundy is an unusual dude. He’s always done things his way (or threatened to pack up and head east) and it has largely paid off (literally, too).

He’s one of the 10-15 best coaches in the country — a coach Texas, its arrogance be damned, would be lucky to land.

I’m not sure Texas, or its handlers rather, understand how this whole thing works. Gundy called OSU his Boston Red Sox job this season (because, har har, it’s 2013, get it?) but I think Texas actually thinks it is the Boston Red Sox. And the Red Sox don’t hire folks who already think they’re coaching the Red Sox.

I don’t think Mike Gundy will be the coach at Texas but not because he doesn’t want to.

If Grantland called me this afternoon this would be the last post you ever saw on Pistols Firing.

And you know what?

Nobody would blame me.