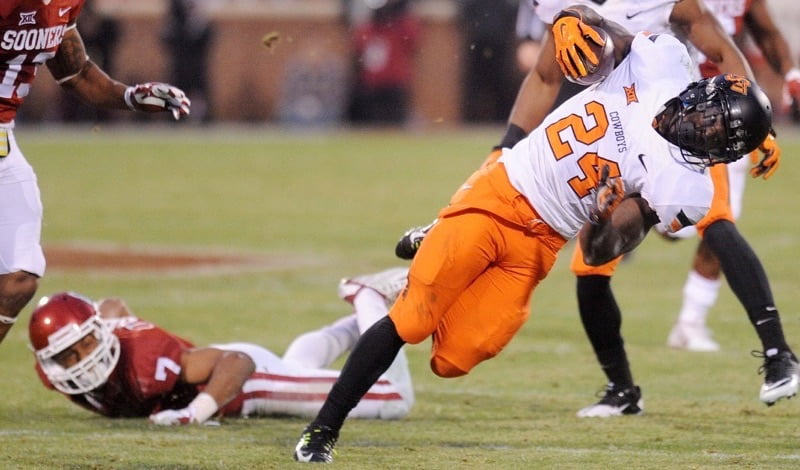 We’re already a week into another year and already have at least one (and maybe two) moments that will make this list at the end of 2015 but first we need to look back on the 10 most important of 2014.

These aren’t necessarily the 10 best moments — see: Tyreek with his hands around a woman’s throat — but the 10 moments that most shaped what OSU was as an athletic entity over the last year. The ones we’ll remember a decade from now.

I did the full breakdown here but this spot was reserved for Hill the moment he made the second juke in Norman. What a moment. One of the greatest in OSU sports history.

And this was one of the not greatest moments in OSU history but definitely the biggest story of OSU’s basketball season last year. A microcosm of it too.

What if he never gets hurt? OSU might be (and probably is) better in the short term but if No. 4 goes all 13 games then we wouldn’t be talking reverentially about the big fella from South Carolina right now.

I was there. It was everything.

We might not be elite at everything but we are an elite court-storming school. GIA rose from the dead for one wickedly fun night in Stillwater, Okla. and delivered all of the feelings.

Oh and OKC Dave texted me that morning and almost bet his kids’ future college on Kansas -2. I talked him off a ledge.

Tyreek, gone. For the sixth (and last) time on the season.

I talked a lot about OSU’s in-season football transformation but how about the two-year surgery Josh Holliday performed at Allie P.?

First OSU won the Big 12 title then advanced to host a Super Regional with a bid to Omaha on the line.

They lost but it led to this photo which was great…

Travis Ford taking a look at what the Sweet 16 looks like – pic.twitter.com/PwFRTJSUuJ

7. Oklahoma State falls to Gonzaga in 1st round

Two (probably three) NBA guys and one of the five best shooters in school history and Gonzaga STOMPED OSU in the first round. If the Oregon loss bad this one was catastrophic for Travis Ford’s career arc at OSU.

8. Oklahoma State absolved of most of SI’s allegations

This one would have been higher if there had been more up in the air. There wasn’t so it isn’t.

Chris Perry won his second and Alex Dierenger took his first in OKC. They were OSU’s 135th and 136th individual national titles. Insane.

Mike Holder’s move to fire Mike McGraw and hire Alan Bratton looked to be justified as OSU advanced to the match play final against Alabama.

The drama was thick given that McGraw was one of Bama’s assistants but the outcome never in doubt as the Tide won 4 and 1 over the Pokes.