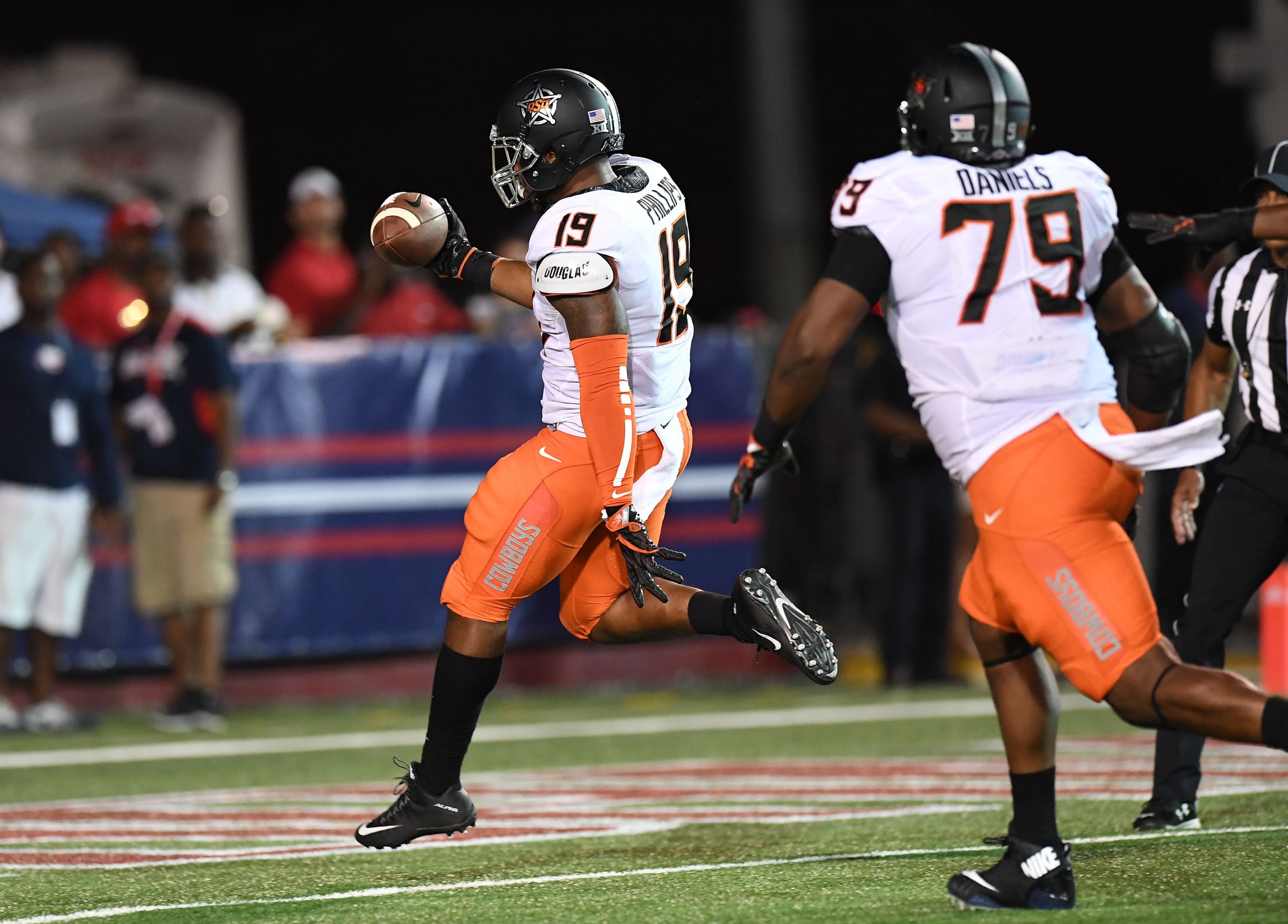 Hey, we have a sponsor for our 10 Thoughts posts for the rest of the season. You should check out 1907 Meat Co. in Stillwater for your tailgating needs. More beef than a line full of Aaron Cochrans!

Oklahoma State torched South Alabama on Friday night in Mobile, Alabama in front of fewer fans than an East Dillon-West Dillon tilt. James Washington did presidential things. Mason Rudolph did Heisman things and the Oklahoma State defensive line apparently read what we wrote last week because they set up camp in the USA backfield all night.

Rudolph grabbed himself the all-time passing record in Oklahoma State history as he diced up the Jags on 25/38 for 335 yards, 3 TDs and another one on the ground. The game was ugly early and got out of hand late.

Oklahoma State didn’t look quite as mighty offensively as it did last week against Tulsa, and it has gotten itself into a bind at linebacker before the Pittsburgh game next week (more on that in a minute). But the Pokes did what top 10 teams do against directional schools from republican states: It overwhelmed USA with speed and depth and cruised to its second victory in as many weeks.

I’m not sure there has been better objective evidence of how good Mason Rudolph is than how Oklahoma State looked when Keondre Wudtee came in late in the game. Rudolph was not quite as sharp as he was in the opener (when he went 20/24), but he hit Marcell Ateman and James Washington with seeds like this all night.

Thing is we’ll at least do this 3 more times pic.twitter.com/ax0pA4Nz3Z

A few minutes into the third quarter he also usurped No. 3 on the all-time yardage list.

I realize he’s played in more games than Brandon Weeden and has thrown for fewer yards per game, but that shouldn’t diminish the hurdle of overtaking the best passer in school history. Rudolph might not go down as the best QB in OSU history — that remains to be seen — but it’s probably going to be undeniable that he will end his tenure as OSU’s signal caller as the most-accomplished of all time.

A nice moment in the locker room when @CoachGundy found @Rudolph2Mason to congratulate him on becoming #okstate's career passing leader.

Did we just run a read option with Mason? Oh no Yurcich baby what is you doin?

James Washington was already the career leader in yards per catch for Oklahoma State at 19.2 coming into this season. He upped that number on Friday evening as he caught just two balls for 98 yards and a score. The second was a Reggie Bush-lite two-feet-in-bounds thriller near the sideline. Rudolph spread the wealth, but Washington proved once again that he is USA’s daddy.

3. Jarrell Owens and that line

Have a night, Jarrell Owens. No. 93 had two solo tackles, two tackles for loss and was all over the field on a big night for OSU’s defensive line. After a so-so performance against Tulsa, Joe Bob Clements’ boys came out and ran roughshod over a severely overmatched USA offensive line. Everybody got in on the act, too.

OSU had four sacks, nine tackles for loss, an interception and a fumble recovery. This performance probably doesn’t tell us much for rest-of-the-season projections, but it was delightful to watch them dominate for one night. It should be noted that South Alabama scored more in 20 minutes against Ole Miss’ defense than it did in 60 against Oklahoma State’s. ?

Is OSU's defense better than the Ole Miss defense?

I thought this was a great tweet about Matt Ammendola after he hit from 31 yards, 48 yards and 53 yards but missed from 42.

Ammendola is like Daxx Garmin…solid from 50+ yards but anything less is something to worry about. #okstate

His power is undeniable, but Gundy has proven with his running backs that he doesn’t care how explosive you are if he can’t trust you in easier spots. I’m tentatively in on No. 49 for now, if only for the bombs and because I think the OSU swagger rankings might look like this:

It wasn’t good. It was targeting. He should have been thrown out. I like the targeting rules. I think they’re good. If you don’t think protecting the brains of 19-year-olds is good, I mean, where are we at in society?

Bundage clearly led with his helmet and pummeled the USA running back in the head. That’s targeting. Now, I think the loophole here — and something that needs to be addressed — is that the USA running back did lower his head at the end. It’s tough to stop your momentum, but it’s not tough to not lead with the crown of your helmet.

The worst part now is that Bundage and probably Kenneth Edison-McGruder and Kevin Henry are out for the Pittsburgh game. Bundage can play the second half, but that’s a big loss at a talented position for OSU.

Justice Hill and J.D. King didn’t look quite as explosive as they did in Week 1, but this speaks to Oklahoma State’s balance on offense more than anything. USA clearly sold out to stop the run (and did as they allowed only 4.4 yards a pop for the Pokes). The result? You get carved up by a NFL arm who has NFL weapons all over the field. Only Lewis and Clark have seen more open space against USA than OSU’s receivers did on Friday night.

#okstate In slightly less than six full quarters with Rudolph on the field, OSU has 989 total yards (10 per play) & 79 offensive points.

My only (teeny tiny) concern with the RBs is that even when they did seem to get a little room, they didn’t hit holes or turn corners with as much oomph as we saw against TU last week. Maybe we can attribute that to the fact that I did my Facebook Live postgame show in front of more people than were in Ladd-Peebles Stadium for the game, maybe not, but it’s something to keep an eye on over the next few weeks.

Here are OSU’s stats in the first quarter of games this year against its opponents’ stats.

You come with “yeah, that’s Tulsa and South Alabama.” I counter with “yeah, that’s what great teams do.” Oklahoma State has had such a tendency over the course of Mike Gundy’s reign in Stillwater to fiddle around with mediocre and even atrocious teams and make second halfs interesting that should not be interesting. That’s not the case so far this year.

He was … not good. To say he looked like J.W. 2.0 would be to say that Emmanuel Ogbah and I do similar workouts at the gym. Look, it’s his first college game so … whatever, but I would have liked to have seen a little more zip and accuracy on his throws. Dude can run, though, so maybe OSU goes full Georgia Tech in 2018 and passes like eight times a game. I’m fine with playing him because his upside is probably higher than the Oil Baron and you’ve already used the redshirt. But I think if Rudy goes down (knocks on every tree, table and chair in the greater DFW area) then Cornelius would probably be the guy.

It’s a hell of a debate. Bag Year Johnson took over a drive late in the first quarter when he caught three passes for 36 yards before Marcell Ateman touched it off with an end zone shimmy. But Chris Lacy also had four catches for 46 yards and Jalen McCleskey added four catches with this being the best of the bunch.

Easy to forget in a blood bath like this but this was a hell of a catch pic.twitter.com/RNjc6JTAeV

The real season starts next week. After two semi warm-ups, Oklahoma State has shown what we wanted to see. I wrote this earlier in the week, but they have the look 120 minutes into the season. The mistakes have been minimal (and correctable), and they have overwhelmed lesser foes like true title teams do. The march is a long one, and it begins in earnest next week in Pennsylvania. Bag year, swag year, I’m here for it all as Oklahoma State’s quest for history rolls on into ACC country and then on into the Big 12.