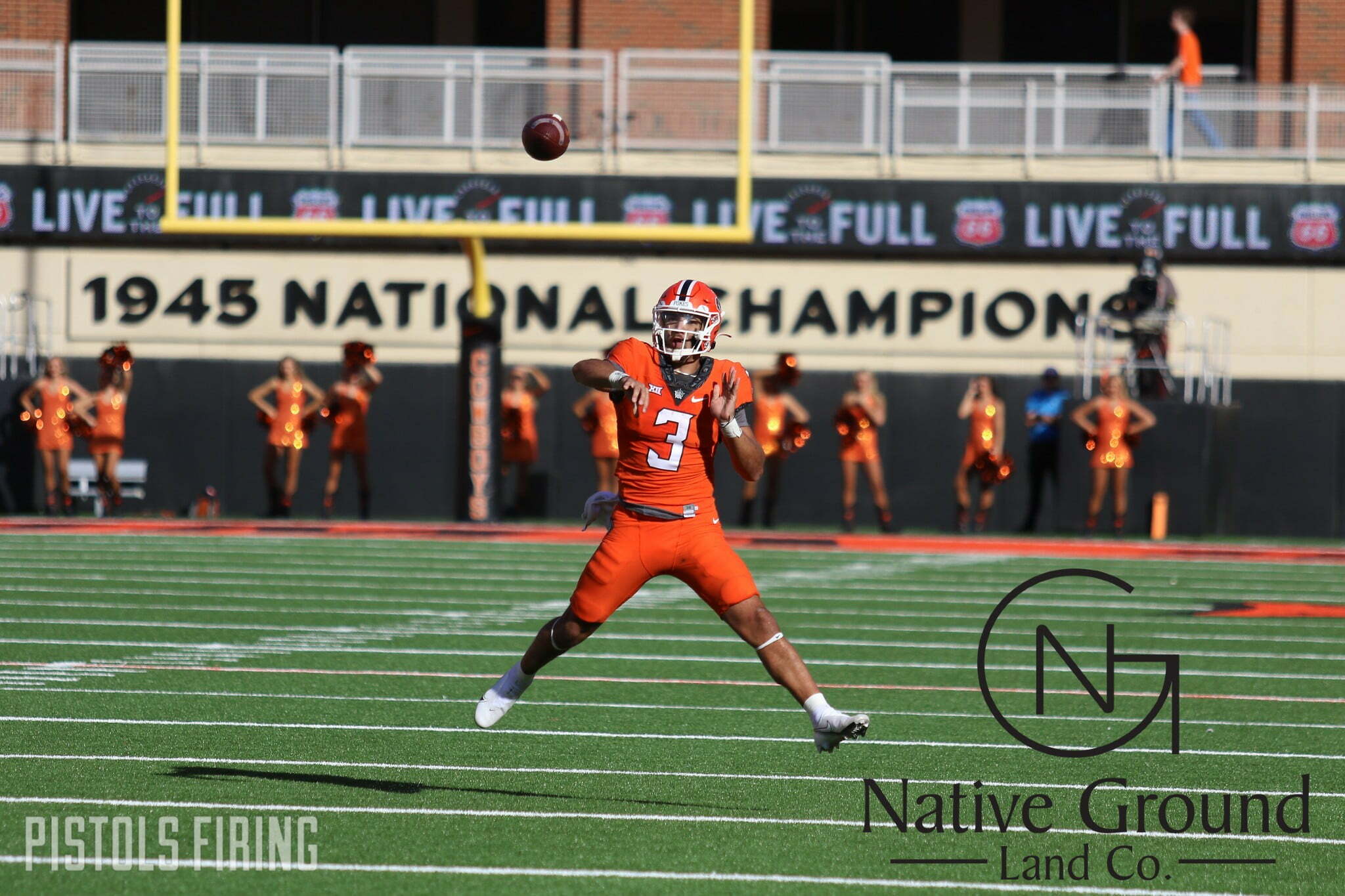 STILLWATER — The Cowboys proved again that culture is more important than recruiting stars.

Oklahoma State defeated Texas 41-34 on Saturday in Boone Pickens Stadium in a gutsy performance that saw the Cowboys play without a handful of starters. Here are 10 Thoughts from the game.

With the world burning around him — injuries galore, a banged-up shoulder, a subpar run game — Spencer Sanders just willed his team to a victory.

It wasn’t always pretty. His interception in the end zone was particularly face palm-worthy, but he was Oklahoma State’s offense Saturday, like he has been all season. Even with the injured shoulder, he finished 34-for-57 which was above his season completion percentage. He threw for 391 yards and two touchdowns while running for another 43 yards. Oh, and he caught a pass for two yards.

“MVP, right?” OSU offensive coordinator Kasey Dunn said. “He’s playing his ass off right now. Super competitive. Love everything he’s doing. He’s fighting through practice. There’s no question he’s banged up, and we’ll see how he feels tomorrow, but he finished that thing. And he finished it with a flurry. Is he tired? He’s exhausted. But he’ll be ready to go.”

When you think about the Cowboys’ grit, that starts and ends with the grit of their quarterback. Is he perfect? No. Is he fun to watch? Absolutely.

2. Mason’s Defense Shuts It Down

In the second half, Texas scored a whopping 3 points and had 172 yards of total offense.

The trio of Quinn Ewers, Bijan Robinson and Xavier Worthy is a formidable one, but OSU’s defense adjusted and was up to the task. It was a Jim Knowles-esque transition between halves.

Another Knowles staple was third-down defense, where the Cowboys were again stellar. Texas came in converting 44% of its third downs. The Longhorns were 3-for-17, 18%, on the money down Saturday.

And the OSU D was also short-handed. Not only was Brendon Evers gone; there was no Brock Martin or Thomas Harper either.

This was Derek Mason’s most impressive performance to date as the Cowboys’ DC.

For perhaps the first time this year, the Cowboys got outplayed on special teams, but the “discipline” part of Mike Gundy’s discipline and toughness (DAT, for cool kids) mantra made the difference.

Texas had 14 penalties for 119 yards and OSU had a big, fat goose-egg. That’ll drive the Longhorn faithful wild over the next week, but thinking back to it, there wasn’t a time I thought OSU should’ve gotten flagged. There probably could’ve been a holding here or there, but there were some of those calls on the other end, too.

But it was a bit of a shock to see OSU’s special teams get outplayed like that. Both teams missed a field goal, but Texas had 100 more return yards than OSU, and Longhorn punter Daniel Trejo pinned OSU inside the 20 four times to the one time Tom Hutton did it to Texas. And UT blocked one Hutton punt. And OSU had a special teams turnover after a ball allegedly hit Brennan Presley on a punt.

Some of the penalty yardage should be a credit to the sold-out homecoming crowd. Texas had five false starts.

It seems like somehow, some way Gundy-led teams just find a way to squeak out hidden yards against teams, and Saturday was another example of that.

The Cowboys were without Braydon Johnson and Jaden Bray (again) on Saturday, forcing true freshman Stephon Johnson into his first start — and early returns are great.

Johnson, nicknamed Boogie (which checks out), caught six of his 11 targets for 90 yards. There was a series in the first half where he made back-to-back circus catches.

Johnson’s path to OSU is an interesting one. He committed to Oregon early before eventually becoming a late addition to OSU’s class. He seems as sure-handed, and if he can keep doing what he did Saturday, he’ll fit in just fine in Stillwater.

Mike Gundy said OSU doesn’t intentionally target John Paul Richardson on third downs, but like some sort of magnet, the ball just finds its way to him.

Richardson had a team-high seven catches Saturday, and two of them converted third downs in the fourth quarter. His first set up Brennan Presley’s touchdown reception later in the drive, and the second set up Bryson Green’s go-ahead score.

He gets compared to all the other former No. 17s, but to me, he is more of a David Glidden (No. 13, totally different). In Glidden’s final seasons it seemed as if the ball always found its way to him on third down.

6. Bryson Green Returns with a Vengeance

Three straight thoughts on a different receiver, all of whom are underclassmen. The future is bright in Stillwater.

Bryson Green was shut down in Forth Worth last week. He didn’t have a catch. How did he respond? How about 133 receiving yards and a game-winning touchdown.

Mike Gundy this week said the plan was to get Jaden Nixon and Ollie Gordon involved more in the run game. That didn’t look to be the case early, but, because of a late Dominic Richardson injury, it did happen.

OSU’s run game needs some sort of jolt. Richardson had 13 carries for only 24 yards. Interestingly, he had three touchdowns despite his longest rush being only five yards.

I don’t want to pin the run game issues on Richardson because I think he is actually playing well. He runs hard. He falls forward. He grinds defenses down. But until the run blocking starts opening up holes, the change of pace is necessary; Exhibit 1 being Jaden Nixon’s 51-yard run on his first carry. After his cleat went flying, Nixon ran for about as many yards as Richardson had the entire game.

Gordon, a similar-styled runner to Richardson, had 13 yards on four carries, as the trio combined to rush for 101 yards four yards a carry (helped immensely by Nixon’s long run).

I think the trio needs one another. Richardson and Gordon can grind teams down and Nixon can come in to try to fly past people. Saturday might’ve been the first step in a more committee approach.

Perhaps the play of OSU’s season last year was Jason Taylor’s 85-yard pick-six against Texas. How did the sequel go? Taylor got two more interceptions against the Longhorns.

He landed awkwardly on his last interception and was helped off the field. Gundy said after the game that he didn’t yet have an update on Taylor’s health (something tells me we won’t know until next Saturday).

You could also argue he shouldn’t have caught the second interception. It came on a fourth down from Texas’ 36 and Taylor caught it at the OSU 41. But those extra yards didn’t end up costing the Cowboys. He is just a playmaker.

“He always ends up around the football — somehow,” Gundy said. “He’s very athletic, got great hands. And in the end, he comes over and makes [a] big-time play.”

For the 17th straight season, the Cowboys are bowl eligible.

It’s something that, at this point, OSU followers probably take for granted, but it’s no simple task. Just ask Kansas. The Jayhawks haven’t been to a bowl since 2008, and at 5-3 now, the Jayhawks could be sweating to find that final win.

Or even ask proud programs like Texas or Nebraska. The Longhorns have been in bowl games in only four of the past seven seasons. The Cornhuskers haven’t been in a bowl since 2016.

It’s what keeps the program churning. It’s not only a nice holiday treat for OSU fans, but the practices awarded because of the bowl game set teams up for the next season.

Next weekend, the Cowboys will play a third straight game against a Big 12 title contender.

Regardless of which team comes out on top, OSU will either play a no-loss or one-loss title contender. A win in Manhattan next week would give the Pokes wins over Texas and K-State if some big three-way tie ends up being a thing. It could afford the Cowboys a chance to be able to slip up against the rest of the Big 12 gauntlet.