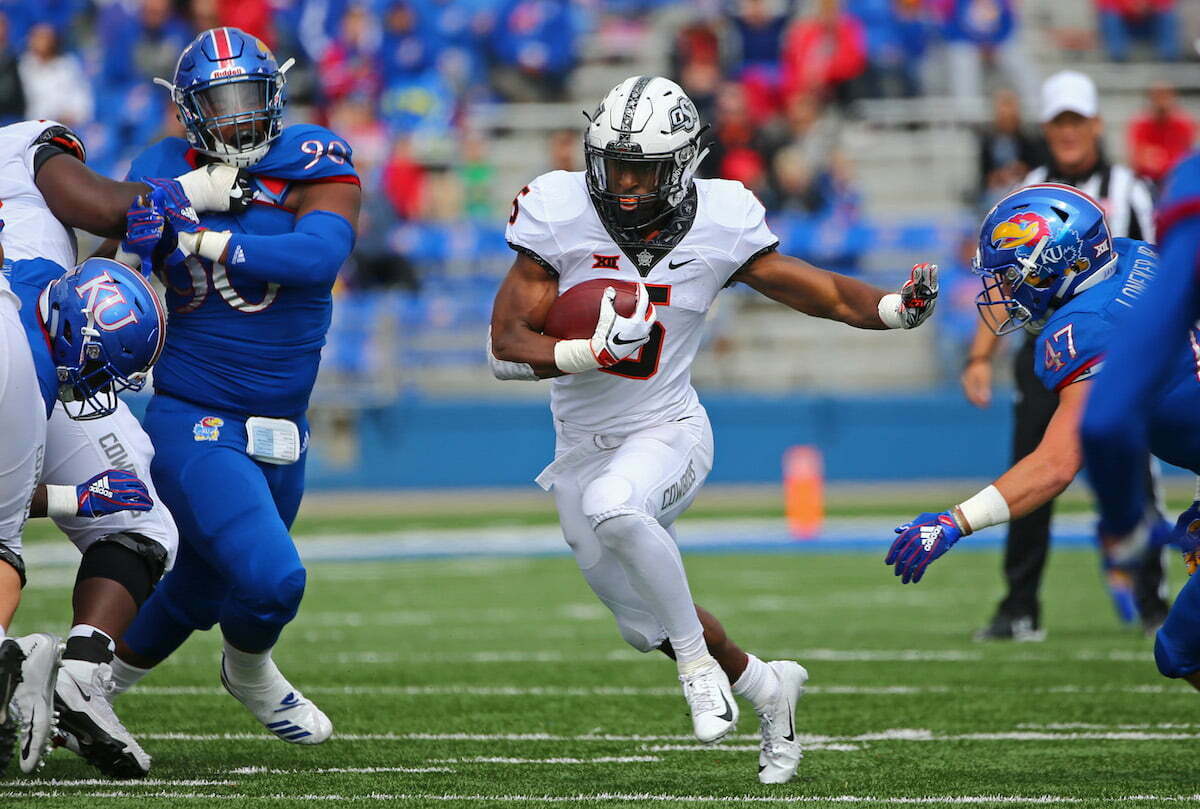 The Cowboys bounced back from a Texas Tech thumping a week ago by doling out one of their own, albeit to a lesser degree, on Saturday in Lawrence, claiming a decisive 48-28 win over Kansas and their first Big 12 victory of the season in the process.

We’ll get to the 10 thoughts shortly, but first, some love to our great sponsor.

What better way to remind the Big 12 that you’ve got the best running back in the league than by running him until he nearly became one with KU’s turf?

After giving No. 5 only 12 carries in a loss last week, Mike Gundy and Co. admitted they didn’t get their best player the ball enough. So in a course correction of epic proportions, Justice Hill toted it 31 (!) times, just two shy of his career high. He rewarded their faith by going for 189 yards rushing, and reached a season-high in carries … by halftime.

.@CowboyFB responds quick on the feet of @jhill21_!

Gundy has been adamant he wants to limit Hill to roughly 15 carries per game on average, but when you’re hitting it for 6.1 per carry as Hill was Saturday (and 9.3 per carry last week), it’s not unwise to ride your guy. It was Barry-esque how he casually and consistently turned two-yard losses into six-yard gains.

This may eventually bite OSU in the hiney (it didn’t on Saturday), but penalties — coupled with a general lack of discipline — is officially a thorn in this team’s side. They had eight for 92 — nearly a full football field’s worth of penalties! — against KU. Kansas, for its part, had only four for 43.

OSU’s 7.0 penalties per game ranks in the bottom 50 nationally, which obviously isn’t great, but the inopportune timing of them (and almost always on special teams) only exacerbates things. And worse: It’s an ongoing trend that is somehow not improving.

#OKState entered today 91st in the country in penalty yards per game, so this doesn't feel like a one-game issue. 70+ yards in penalties in three of last four games.

I don’t think OSU has ever had a more challenging time consistently snapping the ball to the quarterback than it has over the last two games. Every time I turn around it feels like Cornelius is dealing with a low snap and immediately trying to gather his wits.

Listen, Cornelius already has it hard enough with only four starts to his name and a receding hairline. So here’s a thought: let’s not make things more difficult on him by forcing him to play shortstop on half the snaps and quarterback the other half, shall we?

I don’t want to look backwards too much with regards to penalty issues, but on a related topic, each week I think OSU’s special teams can’t get worse, they go on and prove me wrong by one-upping themselves.

There were no fumbles, which I think you can count as a win, but a kickoff-out-of-bounds, a penalty on (what felt like) every punt fielded on a return, and a lack of punch in the return game overall is all setting up for Mike Gundy deciding to totally eliminate special teams altogether by Week 8, right?

Marshall Scott (jokingly) suggested OSU’s punt return struggles and the seemingly inevitable penalties that come with it will eventually lead him to decide against fielding punts altogether, and you can’t convince me that idea hasn’t at least penetrated the mullet and made its way into the right hemisphere of Gundy’s cerebrum.

The good news, though, is that Dillon Stoner’s absence on Saturday inadvertently led to some positive developments to that end. Tylan Wallace’s only punt return went for 19 yards against KU, and Landon Wolf’s only return went for 10. I’m not opposed to Wallace getting a lion’s share of those touches moving forward, so long as it doesn’t prevent him from keeping this up.

5. Tylan Wallace is a full-blown dude

After Saturday, I’m somewhere between “wow this dude could be great” and “are we sure James Washington was OSU’s best receiver last season?” I might need talked down.

Kidding, of course (I think). But holy cow, I don’t think anyone saw this type of breakout coming from him. At least not this season. He had 104 yards receiving on four receptions and added a score against the Jayhawks. It gives him the fourth consecutive 100+ yard receiving day for OSU.

Last week against Texas Tech, OSU’s defense had a tough time getting after the quarterback and applying pressure. Kliff Kingsbury schemed up an impressive offensive gameplan to get the ball out quickly, and OSU simply had no answers.

Kansas, turns out, doesn’t have the personnel to replicate that formula (who knew?!) The result was a resounding bounceback for a maligned defense a week ago: Five sacks, one quarterback hurry, three pass breakups, and nine tackles for loss. Limiting KU to 3 of 13 on third down conversion attempts and 7.7 yards per pass attempt (compared to OSU’s 15.6) is icing on the cake.

7. We need to talk about the Tulsa Tank

I’m hitting thought No. 7 so maybe my creative juices are squeezed, but it’s time to talk to your kids about the Tulsa Tank — or whatever you’d like to call Jordan Brailford.

I have been cautious in talking about him because of his injury history for fear of jinxing him, but my gosh, excuse my injection of hyperbole here, but he might be Emmanuel Ogbah good. He now leads the country in solo sacks with seven (!) through five games, and is tied for first in the country in tackles for loss (not including other statistical updates throughout the country from Saturday).

Considering Brailford on Saturday did all his damage with more focus on him, a result of no Calvin Bundage drawing extra attention, I’d say those numbers prove he’s the real deal. The move from Spencer to Knowles has perhaps benefited no one more than Brailford.

Taylor Cornelius threw for 312 yards on 20 pass attempts compared to KU’s Carter Stanley, who amassed 247 on 32 attempts. Do the math and …. yep, OSU seems to be pretty comfortable with him chunking it like the 1982 iteration of Uncle Rico.

From #OKState's postgame notes: Taylor Cornelius set an OSU record today with an average of 15.6 yards per attempt. The previous record of 15.5 was set by Mason Rudolph at Pittsburgh last year.

Cornelius underthrew Landon Wolf on a TD throw and definitely overshot a wide-open Braydon Johnson streaking on a fade on what would’ve been another score, but by and large, he was pretty great on the afternoon. He hit 15 of his 20 targets and threw four touchdowns to only one interception.

A seed from Corndog. pic.twitter.com/FTDrSIyvF2

Each week no player is (and will continue to be) more closely evaluated than Cornelius, but he played well against KU. Coming off a loss — and one in which he struggled significantly — I was impressed with his resolve.

9. Injuries are stacking up

This is a bullet point that has relevance each week no matter the team, but for OSU, it seems particularly concerning.

Mike Gundy announced Saturday that, in addition to unclear return dates for Calvin Bundage and Dillon Stoner, senior defensive tackle Darrion Daniels is out for the remainder of the season. He didn’t travel with the team due to an undisclosed injury.

The OSU defensive line still played great Saturday despite the injuries, but it’s concerning to see the bug bite at such an early stage of the season.

Jalen McCleskey deciding to redshirt and transfer may have somehow unearthed a diamond hiding in plain sight in Landon Wolf. Whoda thunk it?

Wolf led OSU in receptions (6) and yards receiving (116) on Saturday. With no Stoner nor McCleskey, he took advantage of his newfound opportunity. He figures to be a big factor in the passing game moving forward, too. As is the case with Tylan Wallace, OSU’s most targeted pass-catcher this season, Cornelius looked cozy with Wolf and hit him early and often. It will be interesting if that trend holds, but it felt like there was a concerted effort to get him going.