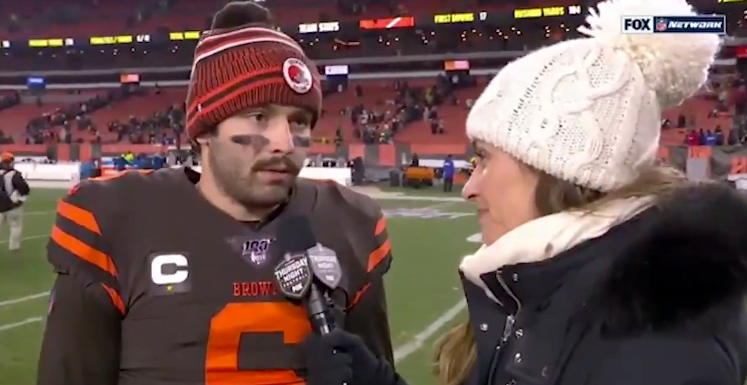 On Thursday night as the Cleveland Browns — the woeful, downtrodden Cleveland Browns — were wrapping up a gleeful win over the Pittsburgh Steelers, Browns star edge rusher Myles Garrett got himself into hot water. In reaction to an apparent slight from Mason Rudolph after Garrett sacked him, he ripped Rudolph’s helmet off, smacked him over the head with it, and was promptly ejected for … attempted murder?

The whole thing was gross, really. Joe Buck said of the incident: “That’s one of the worst things I’ve ever seen on a professional sports field.”

Good for Mayfield for the honest truth. It’s one thing to lay out a late hit or lead with the crown of a helmet, it’s quite another to do … whatever it was Garrett was doing here.

"That's one of the worst things I've ever seen on a professional sports field" pic.twitter.com/UdOrcDV7Y0

Here’s a follow-up with Baker after the game.

Baker on what happened. “I know Mason. … it was tough to watch.” pic.twitter.com/QrnmBIAUEP