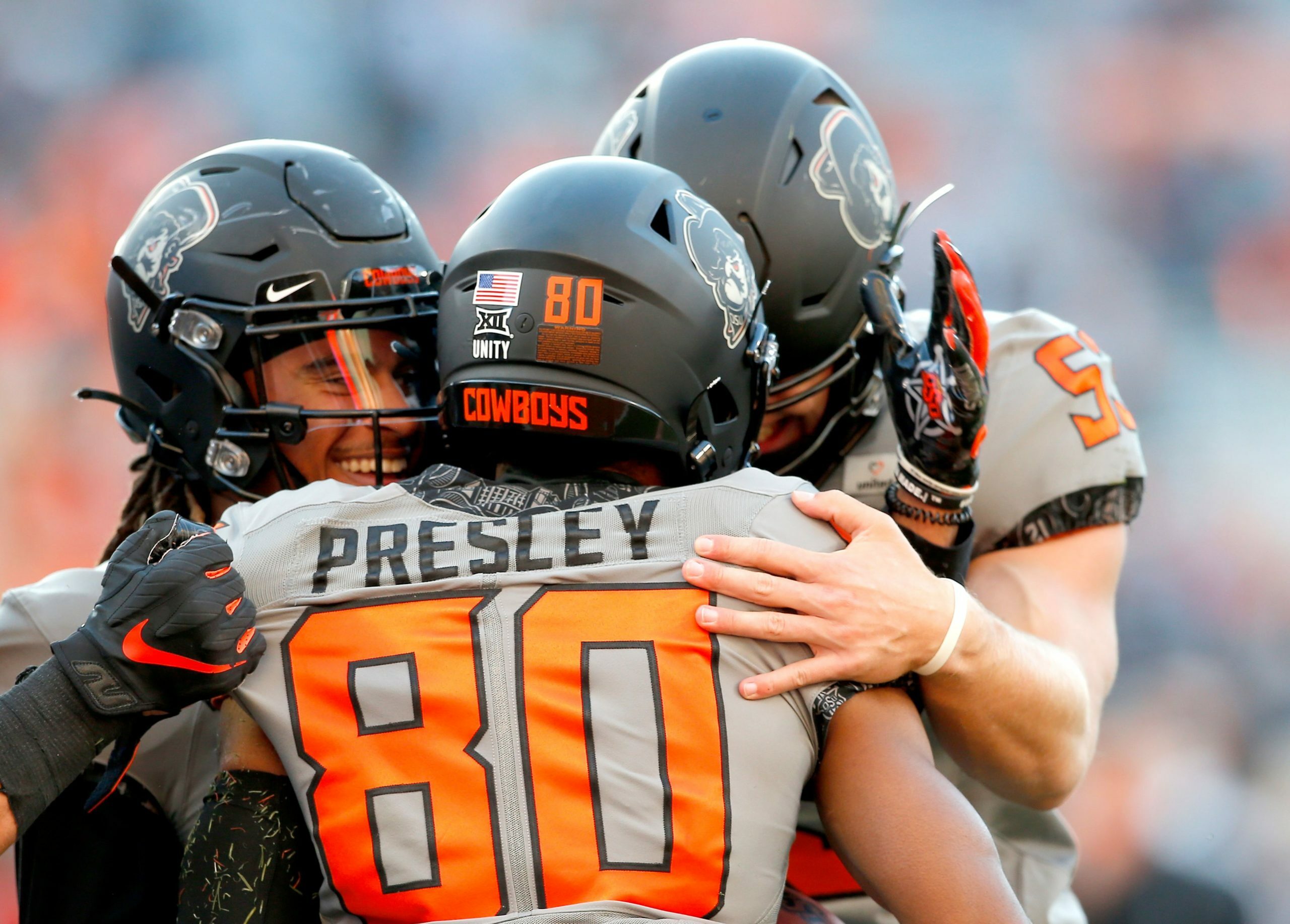 We’ve talked a lot about the OSU defense, the running backs and the QB performance of Shane Illingworth. Today, it’s more of the same with a new topic sprinkled in and a lot of belief to go around. We’re sticking to the hits!

[squints to make sure the coast is clear]

There are just two unbeaten teams in conference play thus far: Kansas State (4-0), and Oklahoma State (3-0). Only one of those teams has its starting quarterback at full strength.

Then there is Iowa State (3-1), which OSU just beat, followed by West Virginia, Texas and OU, all of which are 2-2 in league play.

Oklahoma State is a tier above all of them. It has the best defense. It has a balanced offensive attack that’s only getting better led by a Heisman-good RB. And Mike Gundy, dare I say, is coaching himself some football right now. Firing on all cylinders, this team is. Even Gundy’s hair has some extra shine to it these days.

It’s not going to get easier, which goes without saying but, you know, should probably still be said. Two of of OSU’s next three opponents are ranked inside the top-25, and the one that’s not — Texas — is top-25 caliber.

The schedule was always heavily back-loaded, and we’ll learn a lot about this team over the next three weeks. If OSU can emerge from this Texas-Kansas State-Oklahoma gauntlet at 2-1, or better yet, 3-0, then the Big 12 is there for the taking.

2. Chuba is all the way back

I’m old enough to remember when people really thought that LD Brown, not Chuba Hubbard, was Oklahoma State’s best ball-carrier. It was all of four weeks ago!

Obviously, I cautioned you not to buy into that. LD is having a breakout senior season. Credit to him. But Hubbard remains OSU’s best and most explosive back, and Saturday he again proved why, rushing for 139 yards on 25 carries, hauling in one pass for 21 yards and scoring on this incredible run after it appeared he was going down at the line of scrimmage.

Hubbard certainly started slow relative to Heisman expectations, rushing for *only* 93 yards on 27 carries against Tulsa and *only* 101 yards on 22 carries against West Virginia. But his 139 yard-outing against Iowa State marked his third straight 100-plus outing of the season, and that explosiveness we thought was missing from his repertoire earlier in the year is absolutely, positively back. He’s locked in as the Chuba of old, and expect OSU, with Spencer Sanders struggling in his return from injury, to turn to him as the focal point of this offense until further notice.

3. Spencer Sanders is the unquestioned QB1

Illingworth has 18 more passing attempts and one fewer INT, plus a higher completion percentage. Sanders has the rushing dynamic but has been turnover prone. And Mike Gundy last week mentioned that he may use both quarterbacks moving forward, potentially signaling a Rudolph-J.W. Walsh dynamic between these too.

Truth is, it’s just not likely. Don’t see it. Will Illingworth play again this season? Maybe. Probably, I’d say. But Gundy trusts his vets, and Sanders qualifies as that now after entering the season as a second-year starter. He’s not going to pull him in favor of a freshman, unless Sanders is flat really bad. And Sanders, while he had some errant passes, actually had some bright moments on Saturday. As he eases his way back from injury, there should be more of those moments and fewer mistakes. He makes this offense go with the ability to run it and pass it, and he’ll be the clear-cut No. 1 at the position moving forward.

“We got some things out of him that he shows you, he gives you in practice,” said Gundy on Saturday. “He might mistake something and get you in a bad play, but then he might turn around and make two or three really good ones. That’s what we had today from him.”