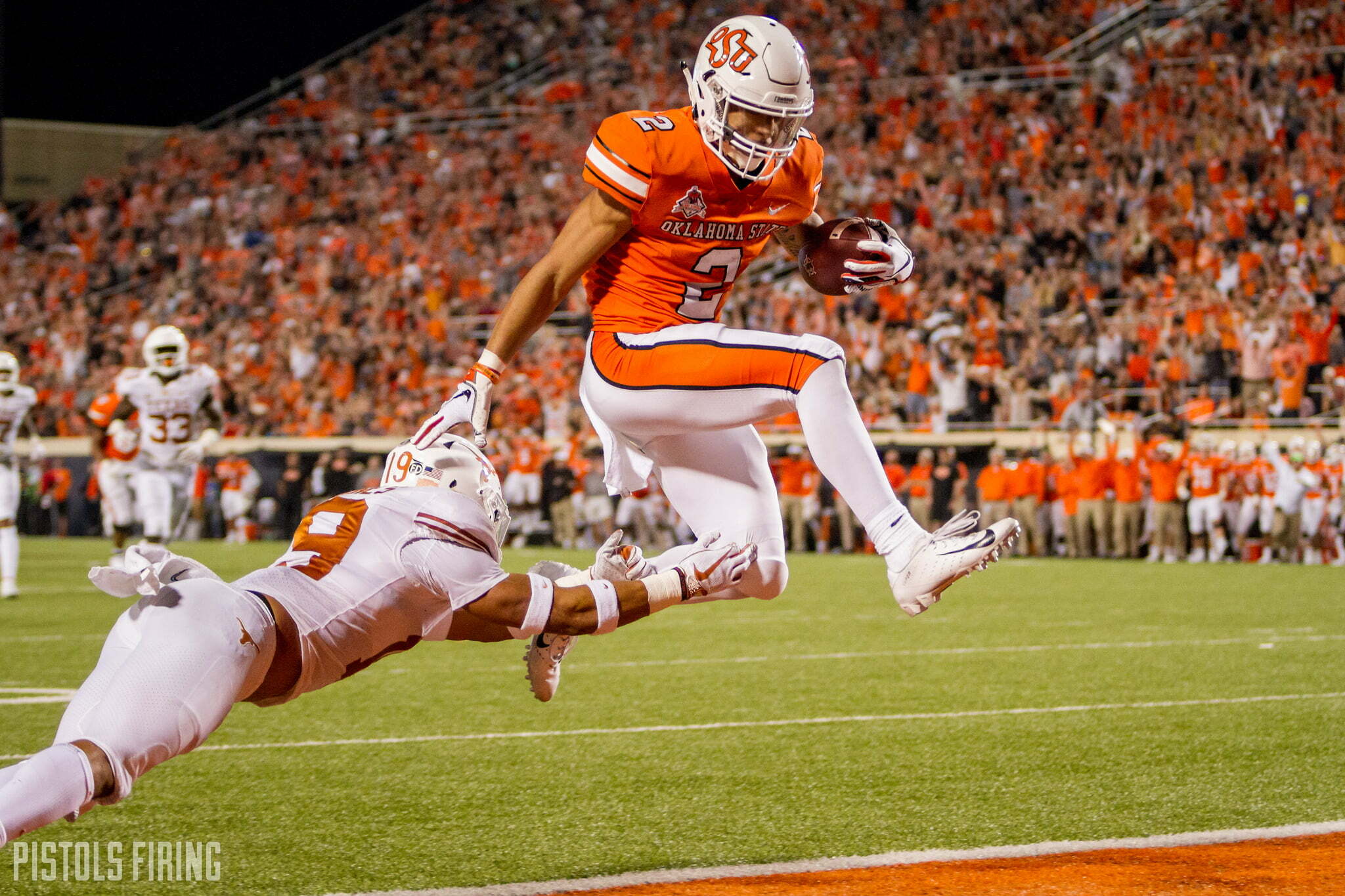 Oklahoma State’s football season brought both heartache and happiness, glee and gloom. There were many highs but many lows. It somehow evened out to a definition-of-average 6-6 campaign, with the chance to improve it next Monday in the bowl game.

We have done plenty of bowl previewing and will continue to do so this week, but to fully appreciate what we’ve witnessed over the last few months (and to put myself through some cruel and unusual punishment), I want to take a trip down memory lane and remember some of the highs and lows we all endured together.

For the first time in several seasons, the most disappointing A.J. Green I have any type of emotional ties to was the one who failed me in fantasy and who cashes checks from the Bengals. The OSU A.J.Green was better than people give credit for, and he had no bigger play than his game-saver against West Virginia to seal a top-10 win for the Pokes.

Where were you at this exact moment? I had two hands over my face and my eyes squeezing through, kicking myself at the fact that I had to write an at-the-horn gamer story. Cardiac Cowboys do not lack entertainment, but they have zero regard for the casual sportswriter with deadlines!

Tylan was open, which was true of like 60 offensive plays in this game, but it doesn’t make the playcall a right one. Earlier in the season after Cornelius threw yet another interception in the red zone after rolling right, Mike Gundy said he should never do that again (roll right and throw.) And yet in the biggest game of the season for all the marbles … that was what they went with. Bah humbug.

This may have been the highlight of the season for me (which maybe says a lot about how the season went.) But in the closing moments of OSU’s knockout punch against No. 6 Texas in Stillwater, as BPS and Cowboy Nation was filled with joy in all but securing a win over the Horns, Tom Herman went absolutely nuts-o on Boone’s sacred ground and it was all caught on national television.

All of this happened after Tyron sonned Breckyn Hager by tossing him to the ground, and right before Gundy issued a both-hands-up at the crowd as if to say, “Art thou not entertained?!”

Full disclosure: I agree 100 percent with Mike Gundy’s message that Twitter is *sticks tongue out and makes fart noise.* It is legitimately the worst. The structuring of the platform, the animosity, vitriol — it all stinks!

But for a man who is paid $5 million annually to relate to 17- and 18-year-olds, and whose job it is to recruit said kids — many times by leveraging aforementioned platform — it all came off as a load of doo-doo.

Especially because OSU’s finishes in the recruiting rankings nationally over the last five years are 44, 34, 38, 45 and 40, while other programs appropriately leveraging social media skyrocket up the rankings.

“I don’t give a rat’s ass about Twitter,” said Gundy after the Texas game. “It’s a platform for people that are sitting home drawing unemployment checks sitting in front of a keyboard,” he said, again sticking his tongue out and making a fake fart noise.

“I just kind of feel like social media and Twitter is kind of what’s destroying this country anyway,” he continued. “That’s how I feel about it. It gives people a platform to bitch, and then other people are needling it and they’re sitting at home and they’re late on a payment.”

While OSU, which hasn’t won a Big 12 title since 2011, has signed 11 total top-500 recruits in the last four recruiting cycles, OU, a program with four-straight Big 12 titles and whose head coach is a social media guru, signed 15 top-500 recruits in its 2019 class alone. None of this should be surprising. Saying what he did was a bad look all-around that doesn’t resonate with recruits or his players, and only plays to his base that love to see him throw dirt on millennials.

Liked: Going for it against Baylor

Was OSU going for it on 4th-and-3 up 3 with 97 seconds left against Baylor the right call? Ummm, duh!

Anyone with a pair of eyes could see that in the second half, Baylor’s offense could not be stopped. At all. Punt away there, and it only makes an imminent touchdown drive 40 yards longer than what it would have been.

Cornelius absolutely did the wrong thing here, giving up a sack in a moment that, well, OSU couldn’t afford to do. But this was still the right call. You can’t ask Gundy to nut up and make gutsy calls, then get upset when he tries to ice the game coaching this defense. He knew what everyone in the stadium knew: Baylor was going to score if it got the ball back.

There is a Tylan Wallace appreciation post this offseason I will gladly write just so I don’t make this post all about him, but gah-lee-wizzzz was this awesome? The pass from Corndaddy was sketch, at best, but Wallace made him look like Peyton in his prime by going OVER Kris Boyd, an All-Big 12 caliber player, and real-life Mossing him.

(While I’m here, a strong did not like candidate was Tylan dropping what might’ve been a game-saving touchdown against Iowa State. That was a legitimate bummer and flat-out drop.)

There is a 30 for 30 — er, rather, a 10 for 10, or 5 for 5 — to be taped someday about what the heck went down in Manhattan this season when OSU apparently volunteered for a beatdown against the Wildcats.

I drove a bajillion hours — most of which was behind a line of traffic — to get to this game, and it was easily a top-5 most disappointing sporting event I’ve ever witnessed. Now I know what Big Ten beat reporters feel like weekly.

The game stunk! Cornelius had as many rushing attempts as Justice Hill, Chuba got one carry, which feels like coaching malpractice now, and OSU allowed a thing called Alex Barnes, to amass more than 7 percent of his season yardage in this game, getting 181 on a season-high 34 attempts. Seriously, this game was gross. The only thing that salvaged this trip was a run to the Blind Tiger in Topeka and good company in Jackson Lavarnway.

The end result was a 31-12 final score and some sensational rumors about coaching changes that were apparently bogus. Good times.

There were some who argued that OSU’s beatdown of Boise would not have been the case had it not blocked the snot out of Boise’s punter. Turned out, that was probably a good argument!

The 44-21 final outcome was a bit of an illusion, as Boise went on to finish 10-3 (albeit in a lesser conference) and OSU went to finish 6-6. Take away those two blocked kicks … and who knows, maybe OSU isn’t going bowling? Or maybe Dru takes over the next week? Lot of outcomes could have been swung — but maybe weren’t — by this game.

Did Not Like: That This Was One of Only Two J.D. King Scores

Dig the play design and target, but this goes down as his second — and final — touchdown in an OSU uniform. You serious, Clark?

Chuba was always going to emerge as the guy, sure, but not giving J.D. a steady diet may have allowed OSU to avoid the current predicament at running back it now finds itself in. Maybe Dezmon Jackson is better and maybe OSU gets a stud recruit in the second signing period, but I’d rather have the sure thing with King. He wasn’t going to be All-Big 12, but he was good for what he was, which was a workhorse. He just never got an opportunity to be anything close to that.

There were several goodies, but this one in particular was a dandy. I’m going to miss No. 5 emerging from a flood of uniforms and rocketing into the open field. A lot. His long scamper against Boise was great, too.