On Larry Reece and the Cowboy fam. (NewsOK)

Ford is right here, OSU has been atrocious in the last few second halves of games. (NewsOK)

Gary Browne’s only mission was to not let Forte shoot. This is what happens when you only have two consistent scorers. (NewsOK)

My thoughts and notes from the game. (PFB)

Terry Tush says OSU is “flirting with the proverbial NCAA bubble with three games remaining in the regular season.” (Scout)

Ubben: “A 2-1 finish would put OSU at .500 and feeling comfortable on Selection Sunday, barring an ugly first-day exit at the Big 12 Tournament.” (Fox SW) 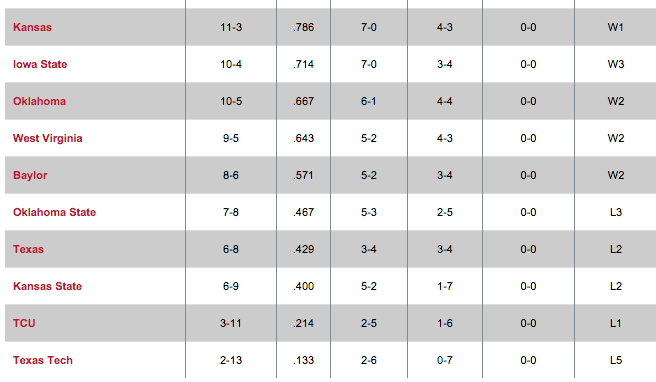 OSU in the NBA

On John Lucas’ stint with the Pistons and why he might remain for the rest of the year. (CRFF)

At least the women stayed hot at Kansas. (NewsOK)

Lots of angst over this one: I wondered if Le’Bryan was a top 10 player ever. (PFB)

These bracket projections were before the WVU disaster — a 7-seed would be, uh, generous right now. We’re probably around a nine or so. (CRFF)

I don’t follow the NBA or Thunder super closely but I think this about the Thunder getting things lined out for next season is probably correct. (NewsOK)

A between-the-legs dunk in a game? (Yahoo)

Whoa, I wouldn’t have guessed this — OSU has been the second-stingiest defense in the Big 12 over the past three years. (ESPN)

James Castleman: “I wanted to get invited to the combine and it bothers me.” (NewsOK)

Florida State was the luckiest team in the last 17 years. #Math (CBS)

Jeff Carr didn’t say much about his official visit. (Scout)

Former coach of the team OSU opens with in 2015: “Being a head coach isn’t all it’s cracked up to be.” I believe that. (Yahoo)

SEC teams will get $5 million from the SEC Network. Yay! (CBS)

Pre-spring position evals have OSU 3rd in the Big 12. (ESPN)

Good thing we have 388 linemen?

More on this later from Aaron Schnautz, but OSU has suddenly won three straight in baseball. (O’Colly)

The regular season is over and OSU finished 12-3 in wrestling. (okstate)

Blogs are burnt out (not sure why I’m posting this but it was interesting). (Daily Beast)

I’m not smart enough to understand what this means, but it’s a cool cartoon. (Kleon)

On being a pitcher, not a hitter. (Godin)

On consistency — the most important attribute of running a successful blog (like this one) or a successful anything. (Becoming Minimalist)

Cool video here on running and life. via Trey Woods