Travis Ford: “‘We got after it defensively, and we sustained it, and we had a little toughness to our defense. It wasn’t one or two guys, it was everybody locked in. It’s the difference between winning and losing.” (AP)

Jeff Newberry might have been better off holding the ball to run out the clock. But instead, he made a statement – that Oklahoma State was there to play a full 40 minutes. (Tulsa World)

While Baylor is still on track to receive an NCAA tournament bid, this was a huge win to improve the Cowboys’ chances of sneaking into the field of 68. (CBS)

Travis Ford: “From the three spot, we come up with 21 points. If we don’t get that, we probably don’t win.” He’s going to have to perform some wizardry to keep that up from that position for the rest of the year. (NewsOK)

Thoughts and notes on the OSU-Baylor game. (PFB)

Guys, Travis Ford is 92-15 (!) in GIA in his career. I know it’s become our favorite pastime to complain about his presence but that’s pretty dang good. (okstate)

I think Ford does a really good job of respecting the history at OSU. That’s not always easy. (NewsOK)

IF Travis Ford was a better basketball coach he'd be perfect because he does absolutely everything else correctly.

Good post here from Bryan Keating on remembering the 10. (KOCO)

The most important game ever played in GIA. (PFB)

And that’s the purpose we serve today. Ten lives were tragically cut short in Colorado. These sons, these brothers, these fathers, these friends. They didn’t get to come home. But their memories remain. (CRFF) 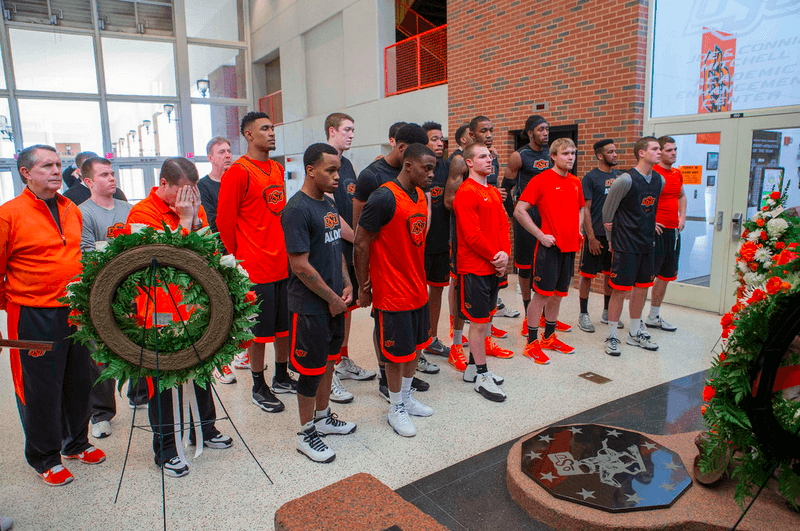 I think Chris Warren III is going to make one Big 12 team very happy on national signing day. He’s one of the best running back recruits in the country, and he can make an immediate impact at Texas, Oklahoma State, or Texas Tech. (ESPN)

Here’s a look at Junior Day in Stillwater. I think I need to get through NSD first. (Scout)

Pretty interesting stuff here: Rudolph’s parents were worried he’d end up like Justin Worley of Tennessee and have a redshirt burned on a 5-7 team. (NewsOK)

Mike Gundy is (slightly) overrated by this metric. I can see it, I suppose. I feel like this has more to do with in-game management which isn’t his strongest suit. (Football Study Hall)

Really good post here on Kevin Williams and why he might retire if Seattle wins the Super Bowl. (Scout)

If you have the sadz about Fed getting bounced. (FTW)

This week’s This American Life is apparently about the comments section on the Internet. I can’t wait. (TAL)

How to apply minimalism to website building. I found this particularly interesting though the concept isn’t exactly profound. (Becoming Minimalist)

Are many grown-ups capable of such a distinction? It’s beautiful, but I don’t like it. (Kleon)

The app economy is now bigger than Hollywood (!) (The Atlantic)

Take your Liams, Olivias, Ethans, Emmas, Avas, Michaels, Williams and Christophers — none of them, not one, can match the Jennifer juggernaut. (National Post)