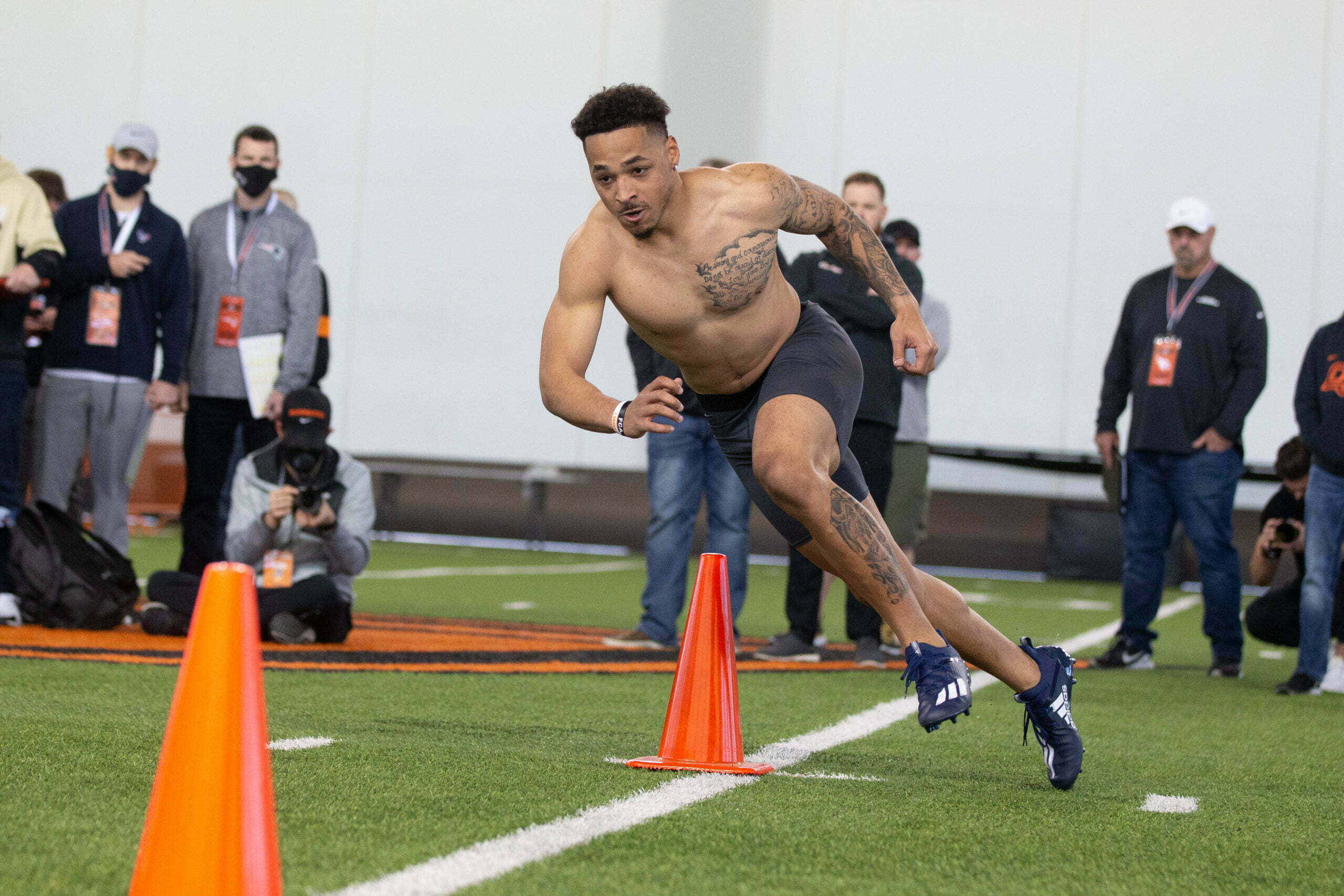 One of the most electric talents to ever lace them up for Oklahoma State could suffer from lack of exposure.

Thanks to the global pandemic, Tylan Wallace — along with the rest of the top draft-eligible prospects in the country — was denied a chance to showcase his skills and measureables in-person at the NFL Draft Combine.

And that made Tylan’s performance at OSU’s Pro Day on Thursday all the more important.

The Big 12’s top receiver last year put up more than solid numbers during his exhibition at the Sherman E. Smith Training Center, but nothing that would set your timeline ablaze.

According to the Senior Bowl’s Jim Nagy, Wallace was clocked at a 4.48 in the 40-yard dash. In February, Tylan ran a 4.39 40 at the independent EXOS Pro Day. The former time would have put him among the Top 20 of receivers at the 2020 combine, the latter would have landed him in the Top 5.

That’s fast, really fast. But for Tylan, that’s more about checking a box than causing a stir. The proof was already in the film can.

Ask anyone who has seen Tylan Wallace play, and they’ll tell you that his game is about more than straight-line speed. He boasts the whole package when it comes to tangibles. He’s fast. He’s physical. He can high-point the ball like Dez in his prime.

But ask Tylan and he’ll tell you it’s about the stuff that won’t show up on a highlight reel or a combine score sheet.

“One thing that’s kind of common with everybody is probably saying the aggressiveness that I play with as far as whether it’s attacking the football, blocking, just things like that,” said Wallace about his conversations with NFL scouts. “I think that’s probably the most common thing if you ask me.”

There are a handful of Big 12 cornerbacks who can also attest to that after receiving a nasty stiff arm or crack-block they won’t soon forget.

“I feel like I play with a different type of edge to me whenever I’m playing,” Tylan continued. “I think I’m a guy that goes out there and gives his all, no matter what it is. That’s kind of the thing that I try to tell everybody.”

Kasey Dunn knows Tylan’s game more than anyone. He recruited and landed the four-star phenom out of South Hills High in Ft. Worth and then coached him up for the next four years, including last season when he called plays for him.

In this unprecedented year, when NFL scouts will get the least amount of face time with their prospective draftees, it’s hard to say whether the playing field will be leveled or the water muddied.

Either way, Wallace is a first-round talent that likely won’t go in the first round. You could chalk that to a field heavy-laden with receiver talent or some of the more trivial measurements on his scorecard. Or maybe it’s because he doesn’t hail from a bigtime SEC program. Maybe it was the season-ending injury last year that dinged in draft stock in 2020.

Regardless, Tylan will hear his name called at some point on during draft weekend, and then he’ll have a chance to prove his star power and potential where it matters, on the field.

“You start looking at some of those guys, I mean DeVonta Smith and all those guys are so good, but I don’t know what their character is,” said Dunn. “I know this, Ty — and I said this earlier, he’s gonna play for a long time and make somebody damn happy.”