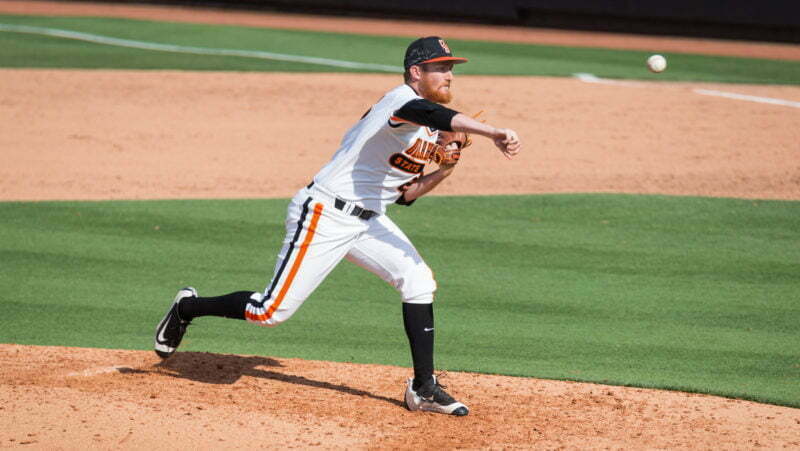 Tyler Buffett was the first to be selected. The Cincinnati Reds took the senior right-hander with the 167th overall pick in the sixth round. Buffett departs after four years in Stillwater, leaving a career 3.78 ERA, a 20-12 record and nine saves.

A brilliant junior season saw Buffett record a 2.82 ERA, a 9-3 record and all nine of his saves. After moving from the bullpen, Buffett went 3-0, posting a 0.78 ERA as a starter during the Cowboys’ run to the College World Series.

Following several shutdown performances on a big stage, Buffett turned down a deal with the Houston Astros, which selected him in the seventh round in 2016, to return to OSU for his senior year. Unfortunately, things didn’t go as smoothly for Buffett or his Cowboys in 2017. His ERA jumped to 5.23 and he allowed 54 earned runs. He had only allowed 62 during his first three seasons at OSU. The Cowboys rebounded late and made the postseason after a run through the Big 12 Tournament.

Cobb was bit by the injury bug his senior season, which limited him to just just 26 and 2/3 innings. He recorded a 3.37 ERA and three saves. Fortunately, it didn’t hurt him in the eyes of the New York Mets who selected Cobb in the eighth round with the 247th overall pick, an improvement on his draft selection from a year ago.

The Broken Arrow native was an instrumental piece in the lethal pitching staff that propelled Oklahoma State to Omaha in 2016. After moving from his starting role to the bullpen, he posted a 0.64 ERA and allowed one earned run in 14 innings of post season play. He finished with a 3.09 ERA in 81 and 2/3 innings and with six saves. He was rewarded with a 12th-round selection by the Chicago Cubs but decided to remain in Stillwater for his senior season.

One of the bright spots for Oklahoma State in 2017 was McCain. The junior was the best offensive player for the Cowboys and a big reason they were able to take home a Big 12 Tournament trophy. He led the Big 12 in batting average (.388), on-base percentage (.491) and hits (87) and was named an All-American.

For his trouble, he earned a 10th-round selection by the Detroit Tigers (305th overall pick). McCain may choose to follow the path of his elders Buffett and Cobb and improve his draft stock as the Cowboys looked to bounce back in 2018.

I know Josh Holliday and Cowboy fans alike would love to see the dynamic hitter in the brighter shade of orange come spring. The MLB Draft finishes up with rounds 11-40 on Wednesday starting at 11:00 a.m. CDT.