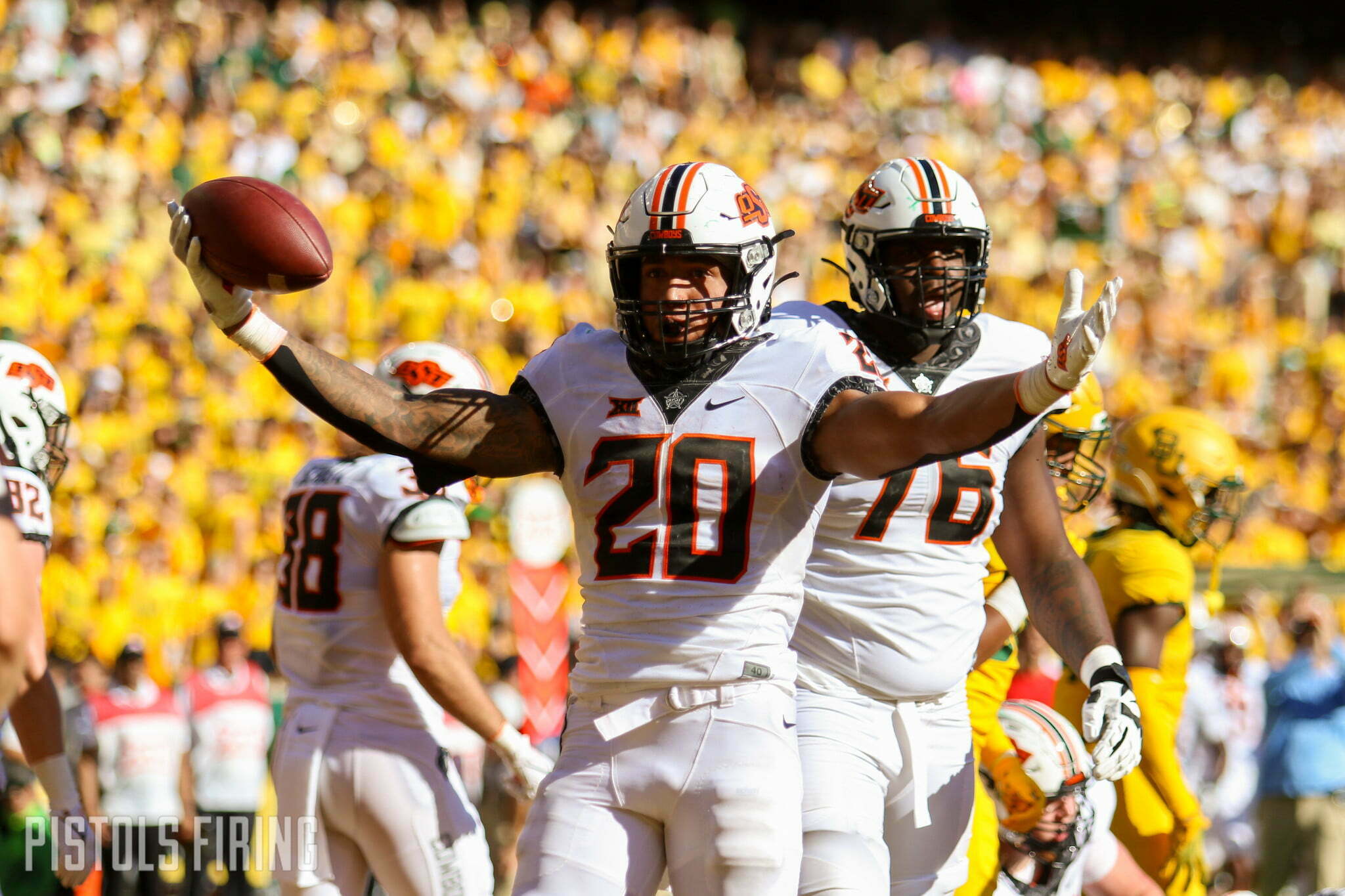 Oklahoma State ended Baylor’s nine-game home winning streak. The last team to win in Waco before the Cowboys? The Cowboys.

I already wrote out my recap of the Pokes’ Big 12-opening win, but if you’re interested in my real-time stream of consciousness, here is my running notebook from the thriller in Waco.

• OSU-Baylor going with the color-rush look with the Bears’ all-gold unis and crowd. Quite a sight.

• Cowboys defer, and the Bears rattle off back-to-back plays of 28 and 17 yards after a quick TFL from Thomas Harper. Only took five plays for Baylor to get into the red zone. Yikers.

• The Cowboys escaped with only a Baylor field goal after Bears receiver Gavin Holmes drops a third-down pass near the goal line. 3-0, Bears.

• The broadcast crew just tabbed OSU the second-fastest offense behind only Tennessee in the FBS. Didn’t know that but not surprised.

• And the Cowboys march right down the field. Sanders is playing fast and decisive. The reports of his being haunted by Bears seem to be exaggerated.

• That was just the seventh try from third-and-three of fewer this season. Richardson picks up five when he needed three.

• Cowboys face fourth-and-1 at Baylor 15. It looked like Richardson was called short on an unfriendly spot for OSU. Sanders goes for it and gets it after they bring out the chains. I don’t need OSU coming up short to become a trend in this game.

• There’s not much going in the middle against this Baylor front. Siaki Ika continues to be a dude.

• Bryson Green climbs the ladder in the end zone and the Cowboys score a TD on their first drive. 7-3, Cowboys.

• Thomas Harper had Craig Williams in the backfield on the Bears’ first play of the drive but was shed. Williams picks up eight. Huge miss there.

• Shapen went down the sideline and Holmes had a 60-yard play but just dropped it in the fall. With the red zone drop, that’s two big negative plays for Holmes.

• Mason Cobb has already made a couple of big plays. Blows up a play for a loss of five. The Cowboys get a stop.

• OSU running outside is a good idea with Ika in the middle.

• And on that note, Dominic Richardson just had a grown-man run up the middle taking a hit from the big guy and then spinning and picking up about five.

• Sanders-to-Presley connection is now 3-for-4 for 42 yards. This was from earlier.

• Cowboys had fourth-and-4 at the Baylor 41. Gundy elects to punt it and it pays off when it bounces into Braylin Presley’s bread basket at the 1-yard line.

• And it really pays off now. The Bears pitch it lateral and the Cowboys get a safety. Just like they drew it up. Shades of the Central Michigan game.

• But the Cowboys go three-and-out. Then Kanion Williams makes contact with Baylor’s returner Holmes after he called for a fair catch. That’s both sides of the special teams spectrum on back-to-back punts. That will give the Bears the ball at their own 29.

• Richard Reese just jukes two different Cowboys and a decent run turned into 24 yards. The Bears play off that with a big play-action pass for another big pickup. Bears just marching down the field.

• Brock Martin just hit Blake Shapen from behind deep in the red zone. Then Mason Cobb made a huge play, closing on the ball for a fourth-down stop. Cowboys will take over on downs at their 7-yard line.

• Sanders threw a dangerous dart across the middle that was batted down.

• Jake Schultz laid a mean block to get his QB some more open field.

• Cowboys defense stomped out that next Baylor drive after a Collin Oliver sack.

• Sanders is slicing up the Bears. He’s thrown some darts. He’s also rushed 10 times for 72 yards.

• Dominic Richardson got the ball over the goal line, but it’s going to be first-and-1. OSU calls timeout.

• Regardless, Sanders gets in on the next play. Cowboys up 16-3 with 27 seconds left before half. That was masterful clock management for Gundy & Co.

• Cowboys will get the ball back in the third with a chance to take a three-score lead early in the second.

• That’s the fewest points by Baylor in a first half at home since the Cowboys beat them in 2019.

• And the Cowboys take that three-score lead without Spencer Sanders even taking the field. Jaden Nixon takes the opening kickoff of the second half to the Bear cave (???). Need to work on my puns.

• Tyler Lacy was apparently taken off in a cart. Not sure what happened but the Cowboys appear to be missing him on the Bears’ first second-half drive.

• And then Shapen finds Moaray Baldwin for DEEEEP ball. Bears pull within 23-10 on a 49-yard TD.

• And Spencer Sanders throws an interception. Baylor defender just jumped the out route and stepped right in front of the ball. Bears take over in OSU territory.

• Richard Reese is a dude.

• Looks like Tyler Lacy is back from his mysterious injury.

• The very next pass after his interception, Spencer Sanders finds Braydon Johnson for 49 yards.

• Braydon Johnson: Homerun Threat. He was called out at the 1. Dominic Richardson scores on the next play. Cowboys take back some momentum, up 30-17.

• Baylor goes for it on fourth-and-2 in its own territory, and the pass is incomplete. Baylor is 0-for-2 on fourth downs. Pokes take over at the Baylor 33.

• OSU had a few tries at the one and came up short … again. Ghost of Arlington?

• This time the Cowboys are able to afford to kick a field goal from the 1. Tanner Brown makes it 33-17.

• On fourth-and-5 from their own 29-yard line, Baylor scored a 70-yard touchdown. Not so sure OSU could afford that field goal, now that I think about it.

• Trace Ford gets his mitts on more footballs than Vincent Taylor.

• Following that 70-yard score, Shapen throws back-to-back picks thanks to Thomas Harper (off of Gavin Holmes’ hands) and the most Jason Taylor play ever.

• The Cowboys are able to hold on for the BIG win and join TCU (😮) and Kansas (😲) as the only three unbeaten teams in the Big 12.